By Rob Hodgetts
Updated 8:54 AM EDT, Wed September 5, 2018
Link Copied!
Britain's richest person Jim Ratcliffe (left) is pumping $141 million into Ben Ainslie's quest to win the 36th America's Cup in New Zealand in 2021.
Lloyd Images/Getty Images
The team is known as Ineos Team UK, named after the Ineos petrochemical company which has made Ratcliffe a $26.9 billion fortune. The outfit has launched a radical test boat based on the 75-foot foiling monohull that will be used in Auckland.
Harry KH/INEOS TEAM UK
That's because defender Team New Zealand scrapped the multihulls from Bermuda 2017 and opted for an unproven foiling monohull, to be known as an AC75.
Ineos Team UK
Britain has not won the America's Cup in its 167-year history but four-time Olympic gold medalist Ainslie is determined to put that right. Ineos is the first of the four competing teams to have launched a prototype.
Harry KH/INEOS TEAM UK
Ainslie says early trials in the T5 test boat have been "fun" and "full on" and says there has been "a lot of swimming" as he and his team get to grips with its unique foiling properties.
Harry KH/INEOS TEAM UK
Ratcliffe and Ainslie met for the first time over a beer in March and the billionaire was quickly hooked on the concept, provided Ineos could be the sole sponsor in return for full funding.
Lloyd Images
Ainslie, Britain's most successful Olympic sailor, won the America's Cup with Oracle Team USA in 2013 before launching his own Ben Ainslie Racing syndicate to compete in Bermuda last time around.
HARRY KH
Winning the America's Cup would be "immense," Ratcliffe tells CNN Sport. "I'd love it. Also for Britain. We've been having a crack for one and half centuries, which describes the size of the challenge, so it would be a fabulous achievement."
HARRY KH

For instance Ratcliffe, Britain’s richest man with a fortune of $26.9 billion from his Ineos petrochemical company, had no idea Ainslie is a budding pilot who is working towards his private license.

INEOS has partnered with Sir Ben Ainslie, the most successful Olympic sailor in history, to skipper @INEOSTEAMUK.

Friday’s launch was the first of many steps as we head towards the 36th Americas Cup in 2021. A good opportunity for @ainslieben and Jim Ratcliffe to talk strategy! pic.twitter.com/o4F6jIQolp

“We should put no flying into the contract,” jokes Ratcliffe, 65, as the pair chat with CNN Sport in the sumptuous setting of the Royal Yacht Squadron in Cowes, Isle of Wight.

Ainslie, Britain’s most successful Olympic sailor, was equally unaware of some of Ratcliffe’s more adventurous escapades, such as getting lost on his own in a storm on the summit of Mont Blanc.

Apparently, he got separated from his friend and had to dig a snow hole for shelter before eventually following a Japanese party down the narrow exit ridge to wait out the tempest in an emergency hut.

“I hadn’t heard any of that,” laughs Ainslie.

The duo make for easy company, regularly laughing and chipping in on each other’s answers, as they discuss the development of the Ineos Team UK outfit that will challenge for the America’s Cup in New Zealand in 2021.

They met for the first time over a beer in March, arranged “rather mischievously” by a mutual friend, superyacht broker Chris Cecil-Wright.

“I’d read bits and pieces about Jim and Ineos in the press so I was intrigued,” says the 41-year-old Ainslie, the team principal. “It’s always interesting to meet people who are successful in any walk of life.”

READ: Confessions of a superyacht stewardess 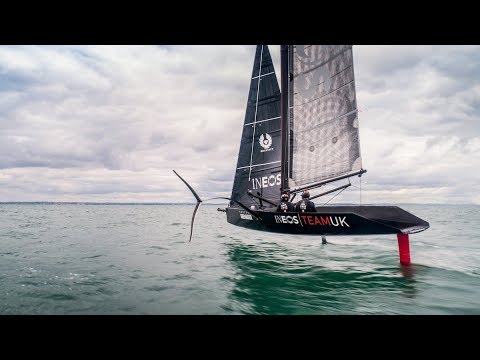 Ratcliffe, who grew up on a council estate in Manchester, was named in this year’s Sunday Times Rich List as the UK’s wealthiest person on the back of a 60% stake in Ineos, the company he founded in 1998 which has recently courted controversy for its fracking operations.

Although he has owned a number of superyachts, the America’s Cup had never been on his radar.

He has also been linked with a £2bn takeover of Roman Abramovich’s Chelsea this summer, although he refuses to discuss it publicly.

However, the meeting with four-time Olympic gold medalist Ainslie and talk of his quest to win the America’s Cup – dubbed the oldest trophy in international sports – “stimulated some interest.”

“I suppose it was the intriguing question of why, after 167 years of attempts, Britain still hadn’t managed to win this sailing event, given we’ve produced quite a lot of good sailors over the years, ruled the waves for a few centuries, and are really good at Formula One, which is a marriage of technology and sport,” says the Brexit-backing businessman.

The tall, lean Ratcliffe, in an open-necked white shirt and jeans, cuts a raffish air as he chomps on a sandwich and chats about how his various exploits over the years opened his mind to a Cup campaign. He has hauled a sled to both poles, been on a number of long-distance motorbike safaris across Africa and “climbed a few mountains.”

“I just like the odd adventure, really,” he says, his youthful eyes twinkling. “I’m privileged I can afford it.”

He suggests taking on the America’s Cup alongside building a billion-pound business is “part of that DNA.”

“Ineos is a bit of an adventure from time to time,” he laughs.

“Buying BP in 2005 was quite a challenge, I have to say. We wrote that check for $9 billion. We had to notify the Bank of England when we sent it to New York, it was the biggest check they’d ever received.”

Over drinks, Ainslie told him of his “gut-wrenching” disappointment of the Bermuda 2017 America’s Cup.

Ainslie’s fledgling team reached the semifinals of the challenger series, only to lose heavily to eventual winner Team New Zealand. He describes the whole experience as “massively frustrating,” knowing from a long way out they didn’t have the firepower, in terms of boat speed, to contend.

Ratcliffe chides his new friend: “He’s not been very good at not winning, have you?”

Ainslie told Ratcliffe his LandRover BAR team, as it was then known, was “realistically, up against it,” saying he would need a far bigger budget – up to 30% more – to fund the two radical new 75-foot foiling monohull boats that will be the weapons of choice in Auckland.

Ratcliffe was keen, but only if Ineos could be the sole sponsor, instead of relying on a coterie of backers. Joint ventures, he says, “just make life more complicated.”

“Then it’s down to Ben and his team to design a fast boat so you get to the start line with a boat that’s competitive and then you’ve got the race, you’ve got the sport,” he says.

Ainslie had come to the same conclusion and agreed a “gracious parting” with title sponsor Land Rover, as well as backers such as BT, Charles Dunstone of Carphone Warehouse and air miles entrepreneur Keith Mills.

He took up with Ineos within “weeks.”

Ineos Team UK is the first of the 2021 America's Cup teams to test a foiling monohull.
Harry KH/INEOS TEAM UK

Ratcliffe, a keen cyclist, says he has always been competitive. He “hates it” when he is beaten to the top of a climb, even by a colleague who is 40 years younger. And he says he has “never had a friendly game of football.”

Now, that fire will be turned towards Britain’s attempt to win back the America’s Cup for the first time since the inaugural race in 1851.

“It would be immense,” he says. “I’d love it. Also for Britain. We’ve been having a crack for one and half centuries, which describes the size of the challenge, so it would be a fabulous achievement.”

Ratcliffe says his team will provide a “light touch,” offering business advice and perspective, based on a lifetime of “predominantly right decisions.”

Ainslie says Ratcliffe’s ability to cut through the noise and focus on the end result – designing the fastest boat – is already paying off.

“I don’t have any advice to give to Ben just because I’ve done a few daft things in my life,” adds Ratcliffe. “But one of the lessons is don’t make the same mistake twice.”

He laughs: “I wouldn’t go up Mont Blanc without a guide again when there’s a storm coming in.”

‘A lot of swimming’

With fresh impetus, Ainslie has already stolen a march on the opposition by launching a smaller prototype of the new AC 75, a foiling 28-footer known as T5. The race boats can’t be launched until March 31, 2019.

“The test boat is a handful,” he says. “It’s a really fun boat to sail. If the 75 is as full on as the test boat, it’s going to be interesting. There’s been a lot of swimming involved.”

More may emerge before the December 31, 2018 deadline, but Ainslie isn’t fussed by the size of the field.

Ratcliffe is relishing the adventure. “The journey’s got to be fun and interesting,” he says.