Music’s power over pain gives it the ability to heal

Editor’s Note: This feature is part of Music and Your Mind, a series exploring how music affects your brain. Read part 1 on behavior and part 3 on torture.

“People told me, ‘You are changing me.’ ‘You are healing me,’ ” Emma Smith said.

This is the feedback Smith receives on her YouTube videos, which compile gentle sounds created by touching, tapping or stroking objects, such as hairbrushes and books.

These sounds can create an autonomous sensory meridian response, or ASMR. This is a tingling sensation, usually starting in the crown of the head and moving to other parts of the body.

“Everyday objects all have a sound,” Smith said.

The experience is caused by a range of “triggers,” including whispering, soft speaking, tapping, scratching, slow hand movements and close personal attention, reports one of the few studies into this phenomenon.

Not everyone experiences ASMR. Smith believes it comes down to an individuals’ sensitivity to sound.

But the experience was linked to a reduced heart rate and increased skin conductance levels, offering potentially therapeutic options for mental and physical health, according to a 2018 report. Another study has shown that ASMR videos can temporarily ease symptoms of depression or chronic pain in listeners.

The experience is about “noticing things around you” and helping people become present, she said.

As someone who was diagnosed with post-traumatic stress disorder in 2013, Smith turned to YouTube in search of relaxation videos herself to help her sleep and feel at ease. “If I was able to sleep and be calm, I was able to focus on my therapy,” she said. 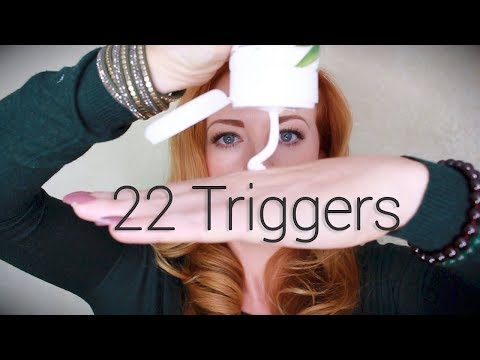 A form of mindfulness

The exact nature of ASMR is not understood, according to a report by Swansea University, in the UK. One theory is that the tingles some people experience result from a minor seizure, but this has not been investigated.

The Swansea report found that participants who had depression used ASMR videos specifically to help them with their condition. ASMR can improve mood in depressed people because it can be considered as a form of mindfulness, according to the researchers.

People focus on the positive feelings created and focus exclusively on the present task, explain the researchers. This is similar to other mindfulness practices, like meditation, that have been shown to improve depression and chronic pain.

Tones to relax with

Sleeplessness and insomnia is a global problem. A recent study found that people who get an average of only six hours sleep per night had a 13% higher mortality risk compared to people who enjoyed seven to nine hours. 2014 CDC figures revealed that over one third of Americans struggle to get enough sleep regularly.

It is therefore not surprising that people are searching for means to relax and help them sleep.

When it comes to healing or providing calm, lighter tones are usually beneficial for relaxing the head area, while deeper tones usually relax the body’s bones, said Smith who now runs sound therapy sessions that involve people lying down and listening to chanting, gongs or other instrumental sounds.

After a session, most people shared with Smith that they feel refreshed, balanced and more relaxed.

Smith explained that many people feel transformed as a result of being at peace for an entire hour, without any interruptions. “When we are completely relaxed our body works at full capacity, so it is able to heal itself,” she said.

‘A massage for your mind’

In a good sound bath session there will be no interruptions. If that is the case, around 75% of people reach an altered state, like a dream-like trance, according to Franses.

Franses encountered people with depression who reported feeling better after sound baths as it helped with relaxation, while people with physical injuries shared with her that they were able to relax for an hour and forget about the pain in their body.

She believes that a sound bath is essentially a “massage for your mind” and people leave feeling pampered and very relaxed, which produce a wide range of positive outcomes in people.

Studies into the effects of sound baths are limited, with one 2016 study observing that 62 participants felt less tension, anger, fatigue, and depressed after a sound bath, especially in first-time users.

Sound healing may be a relatively new phenomenon, but the idea of using sounds or music to address pain has been around for much longer.

Music has remained popular throughout history because of the emotional impact it has on people and its power to help regulate emotions, according to research by Daniel Levitin, professor of psychology and music at McGill University in Montreal.

The effectiveness of using music to deal with physical pain has also been clinically proven. Studies on people who underwent medical procedures, such as cardiac, colonoscopy or knee surgeries, show the patients who listened to music after their surgery having lower levels of anxiety and a lesser need for painkillers.

This is mainly because music has the power to lift people’s mood, Levitin said. A positive mood, in turn, affects peoples’ serotonin production, which boosts production of natural killer cells and T cells – both vital for a healthy immune system.

A different analysis compared the prevention of anxiety before scheduled surgery by either taking benzodiazepine sedatives or using a relaxing playlist put together by a licensed music therapist. Both groups in the trial received the same amount of care, but researchers found that the group who listened to calming songs had significantly lower anxiety levels.

Rachael Finnerty, a music therapist based in Ontario, explained that this is down to pain being an emotion, affected by a person’s emotional well-being.

“Music is such a good distraction to pain,” Finnerty continued, because “when we are listening to music we are processing the memories and the emotions that are related to the music which makes it much more difficult for us to process the memories and emotions associated with the pain.” Because of that we can impact pain perception through music, she said.

Both music and pain use the same neurological pathways, meaning that music can override the emotions and memories that are needed to evoke pain, Finnerty explained.

Soft music that averages 60 beats per minute can be used for relaxation and to lower anxiety because our autonomic nervous system, in charge of breathing and heart rate, is engaged by music, Finnerty said. If patients focus on the music, they start to breathe to the beat of music, and their heartbeats will start to change to the beat of the music, she said.

But if the music played is linked to negative emotions, the patient will not see benefits, she pointed out. That’s why using a chosen selection of music rather than one the patient has no control over will “always have better results,” according to Finnerty.

Music in the wake of trauma

While we are all very differently affected by music, people can benefit from music as they are dealing with emotional stress or trauma.

In the wake of the “Black Saturday” fires in Victoria in 2009, the most devastating bush fires in Australian history with 173 deaths reported, music therapy was used to help young people navigate the tragedy, a 2011 study says. Participants’ music therapy sessions included songwriting, sharing and discussions of music.

Music therapy was an effective choice because children don’t have the cognitive abilities to verbally process their emotions, but they can identify and express their feelings in music, Finnerty explained.

Music therapy offers an outlet to recognize and process emotions, according to Finnerty, who founded an education platform, the Ontario Music Therapy Academy. Through the song or lyric improvisations children can be in control. By working through the song content and changing it to reflect their situation or how they would like to feel, it will help them change their perception of the traumatic event, she explained.

Ultimately, music is effective in healing humans through a variety of means, because of its multiple yet unique effects on our mind.

It is next to impossible to listen to music and not have some sort of emotion evoked, FInnerty said.