One woman fighting a never-ending battle against sex slavery enlists a warrior ally to her corner. Both find inspiration in each other and the children they saved as they take on the most challenging fight of their lives. CNN spent two years with exclusive access to activist Cecila Flores-Oebanda, boxing champion Manny Pacquiao and anti-trafficking police in the Philippines.

Watch in full
1:19:16
How one woman won over boxing superstar Manny Pacquiao in her fight to beat sex trafficking in the Philippines, only to be hit by a fresh blow at the height of success.

Cecilia Flores-Oebanda has spent her life fighting -- as a child for some education, as a teen rebel against a dictator, and for more than 20 years against human traffickers. Read how Oebanda is inspired by fallen rebels.

She has become the face of the Philippines anti-trafficking movement -- a woman who has the ear of presidents, royalty and philanthropists around the globe.

Along the way she persuaded the biggest name in the Philippines -- boxing legend Manny Pacquiao -- to join her fight. Read how Pacquiao got involved and helped secure a legal victory.

After two years of reporting in the Philippines – from going on police raids in Manila to going undercover in search of human trafficking in remote provinces -- CNN can now tell their story. See images of Oebanda.

Rescued girls describe how they were recruited by traffickers, the ordeals they endured -- sometimes by men a computer click and half-a-world away -- and how Oebanda saved them. Read the girls' horrific stories of abuse and new hope.

Now Oebanda is fighting a battle that could truly ruin her reputation and the organization she created -- fraud allegations made by Philippine investigators. See how Oebanda's work has slumped since the allegations. 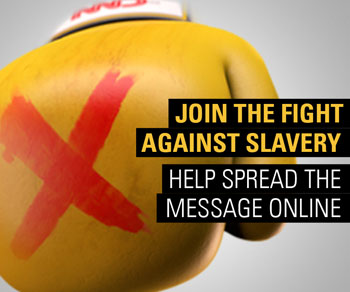 Rarely seen photos from inside Pacquiao's inner circle as he trains for a title fight.

More photos: Pacquiao outside the ring

See how Oebanda's anti-trafficking operations rose through the years -- and plummeted after USAID allegations of fraud.

Oebanda had the ear of presidents and royalty before the fraud allegations.

CNN's award winning report from Mauritania where one woman's journey shows the first step to freedom is realizing you're enslaved.

A maimed Bangladeshi boy's horrific injuries threatened his future unless doctors in the U.S. could save him.

Stand in the Sinai

CNN joined the fight to end modern-day slavery by shining a spotlight on its horrors, amplifying the voices of victims, highlighting success stories and helping unravel the complicated tangle of criminal enterprises trading in human life.

You can keep up to date with The Fighters and the Freedom Project by following us on these social media networks.