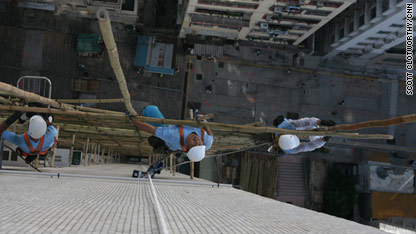 Hong Kong: A property boom you can feel

In Hong Kong you can feel the current property boom.
FULL STORY 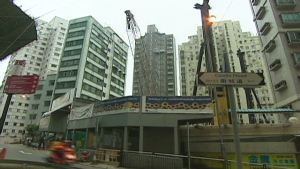 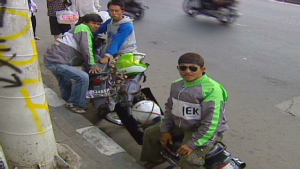 Cramped, self-made huts line stretches of narrow and dirty lanes, accompanied by the smell of open sewers and towers of garbage. Welcome to Dharavi, one of the largest slums in the world.

It may be one of the most developed nations in Southeast Asia, but on the densely packed urban island of Singapore, a simple glass of water doesn't come cheap, or easy.

CNN's Liz Neisloss reports on how Singapore is making sure it doesn't run out of clean water.

Waves gently lap at the shore. Palm trees rustle in the breeze. A boat drifts by. For those who like to work out, there's no better place. This is one of Miami's new outdoor gyms.

On the outskirts of Nairobi, Kenya, mountains of trash are piling up along the dusty streets and footpaths of Africa's largest slum.

His face is crinkled and his health is fading, but Jose Pereira has a teenager's lust for life.

Slough, outside London, is the site of experimental zero-carbon homes. Jim Boulden reports

Hong Kong is undergoing a property boom. Katty Law walks us through one of the city's most exclusive areas.

The rise of Chongqing

An upstart golfer shares his testament to the Chinese city's new opportunities.

Car-free in Atlanta for a year

CNN employee Chris Hrubesh has gone one year without owning a car.

Traffic congestion and headaches, as well as car maintenance, high gas prices and insurance bills bog down many city commuters.

After years spent weaving their way through the congested streets and chaotic traffic of India's commercial capital, thousands of Mumbai residents are now taking the high road to work each day.

Mumbai finds a solution for pedestrians up in the sky. CNN's Mallika Kapur reports.

Zhou Xunshu and Yan Qi both grew up in the mountains in southwestern China, but today their hometowns are worlds apart.

'Chicago on the Yangtze'

In Steve Ritz's high school classroom, students don't have to look far for a snack.

Green teens in the Bronx

Steve Ritz is teaching teenagers in the Bronx to farm in an urban landscape. CNN's Richard Roth reports.

Sushi does a body good

CNN's Dr. Sanjay Gupta explains why a diet similar to the Japanese may help all of us live longer and stronger.

CNN's Robyn Curnow reports on how the once barren black South African suburb of Soweto is blossoming with trees.

Jockin Arputham has been a slum dweller for 43 years, one of more than a million across India.

Alice Nyakaza has the best garden on her street. It is a small patch of lawn with some flowers and a fruit tree. She and her son, Themba, are mowing the lawn when we arrive.

There is a reason more than half the world's population lives in cities, with the number expected to grow. Cities have a lot to offer. Residents can walk to nearby shops and enjoy cultural attractions not available to those in more rural areas. Also, living in a city may make your commute to work much shorter.

How urban living affects your brain

Living in the city may raise stress levels and the risk of cognitive decline. CNN's Dr. Sanjay Gupta reports.

A closer look at urbanization

Toxic in the city

CNN's Dr. Sanjay Gupta explains how to protect yourself from the polluted air in your city.

Bare brick houses stacked one on top of another cling to the hills of Rio de Janeiro.

'Slums' transformed into works of art

With the help of painters, the heart of one Brazilian slum is now a "work of art," as CNN's Shasta Darlington reports.

For the last several days, I have been in beautiful Kobe, Japan, reporting about the World Health Organization forum on urbanization and health.

Berlin's old industrial landscapes may not be much to look at, but they are providing the perfect playground for enterprising city dwellers wanting to get out and about.

When I look back on the year 2010, I will remember spending so much of the year in disaster zones. Between Haiti and Pakistan alone, I spent months on the ground seeing firsthand the aftermath of an earthquake and floods.

Since the 1995 Kobe earthquake, the city has rebuilt itself as "disaster-proof." CNN's Dr. Sanjay Gupta reports.

The Industrial Revolution gave us many good things, among them the ability to create large, great cities and feeding enough people to populate them.

Red double-decker buses and black cabs have long been iconic symbols of London, but Britain's capital may soon become just as famous for its distinctive blue and silver rental bicycles.

Tired of living in the same location but don't want to leave the house you love? That wouldn't be a problem if architect Felipe Campolina had his way.

Which cities rule the world? When it comes to economic activity, political and intellectual influence and great places to live, one recent report holds few surprises.

Urban cityscapes uniting large and vastly diverse populations have long been sources of great inspiration, commerce and community spirit, but for as long as they have existed, cities have also been beset by their own dangers.

After a night in a San Francisco motel three years ago, Maciej Ceglowski awoke covered in bedbug bites.

Walking is a perilous endeavor in New Delhi's traffic bedlam.

A local project aims to clean Delhi's 350-kilometer network of sewage drains and turn them into pedestrian and cycling paths.

Just over 9 percent of the world's urban population lives in a megacity today.

As the world's urban population continues to grow at a rapid rate, communities around the world are increasingly turning to "city agriculture" to produce cheap, locally grown fruit and vegetables.

Farming in the city

In Sao Paulo, Brazil, known as the world's capital of traffic, people try to find solutions to their problem.

For centuries Africa has been a rural continent, but there is a steady stream of people heading into the crowded cities -- where many find their new home is in a slum.

Commuter battle lines in one of Brazil's biggest cities are drawn on the ground, underground and also, in the air.

Away from the hustle and bustle of Delhi's dusty streets, where rickshaws, crammed buses and the occasional elephant usually set the tone for a cacophonous commuting experience, there is an air-conditioned haven that is the pride of local residents: The Delhi Metro.

Juwan Yoo was tired of calling up the old-school telephone hotline to find out when his bus would come -- and excited about the iPhone's arrival in South Korea.

Biking in the Big Apple

A New York bike messenger explains why she loves her job so much.

Climbing trees in NYC as a job

In Copenhagen, Denmark, which has a reputation for accommodating cyclists, Jessica Eisenbraun gets her exercise riding around the city on her steel bike, which is older than she is but easy to maintain. Biking is the fastest way around the city, she says, when you consider how long it would take to park a car or take a bus.

Oxford Circus is one of the busiest junctions in the heart of London. Until recently, it was also the most congested.

Crossing the roads in Cairo

CNN's Ben Wedeman explains why Egypt's capital is a dangerous place for pedestrians.

Living in the city doesn't have to come with a load of trade-offs -- at least not in the urban spots profiled here.

CNN's Sasha Herriman reports on the overcrowding crisis in London.

My mountain bike hasn't seen a mountain in about two years. But it has seen a lot of Tokyo's jammed roadway, which I would argue on some days provides as much of a perilous track as any rugged, unpaved trail.

Delays to tunnel under Bosphorus Strait

CNN's Ivan Watson reports that construction of a tunnel under the Bosphorus Strait was delayed by an ancient discovery.

It's World Health Day on Wednesday, which this year has a special focus on urbanization and health.

A junkyard orchestra of car horns, bus touts, traders and feedback from loudspeakers clamor for attention from the thousands of commuters making their way to work in Lagos's biggest bus stop, Oshodi.

CNN's Kyung Lah reports on the pros and cons of biking to work in Tokyo.

Challenges of life in Lagos

CNN's Christian Purefoy examines the challenges of life in the most-populous city in sub-Saharan Africa.

When I was told we were traveling to the Philippines to do a story on "Smokey Mountain", I was unaware as to just how famous this landmark actually was.

Over half the world's population now live in cities according to the United Nations.

Each morning, millions of city dwellers across the world embark on a mission to beat traffic jams and congested roads, via a variety of transport ranging from modern high-speed trains to noisy tricycles -- and even horse and cart.