From the library Harris and Klebold went into the science area.  Witnesses described the two as looking through the windows of some of the classrooms’ locked doors, making eye contact with some of the students, yet doing nothing of any consequence.

A teacher reported seeing Klebold and Harris in the Science hallway, stopping in front of the chemical storage room just east of the Science Room where she was hiding with wounded teacher Dave Sanders an students.  Several witnesses said the suspects were shooting into empty rooms and taped a Molotov cocktail on the storage room door. The device caused a small fire in the storage room. The gunmen did not appear to witnesses to be overly intent on gaining access to any of the rooms. Their behavior now seemed directionless.

The suspects left the science area and went down into the cafeteria together at 11:44.  The cafeteria videotape recorded Harris kneeling down and resting his rifle on the stair railing and firing several shots, possibly at one of the large 20-pound propane bombs.  From his actions, investigators determined that Harris knew where the bomb was located and in what duffel bag.  Photos of the cafeteria show duffel bags and backpacks scattered all over, yet Harris seemed to know exactly where the bombs were.  He apparently shot at the one, presumably in an attempt to make it explode.  It didn’t.

The videotape also recorded Klebold walking directly over to the same bomb after Harris’ attempts to detonate it failed.  The tape showed Klebold inspecting it and fiddling with something on the floor.

The suspects took a moment for a drink of water, drinking from water bottles left behind on the lunch tables by students as they fled the cafeteria.

Klebold then stood back and lit something, possibly a CO2 cartridge or a pipe bomb, and threw it at their propane bomb.  They left the cafeteria as the bomb was detonated.

The videotape showed a partial detonation of the bomb and a fire at 11:46. The bomb was attached to smaller containers of flammable liquids that possibly were ignited by the device thrown by Klebold.  That explosion caused the fire in the cafeteria that, in turn, set off the fire alarm and the sprinkler system. These events were caught on the cafeteria’s security cameras. 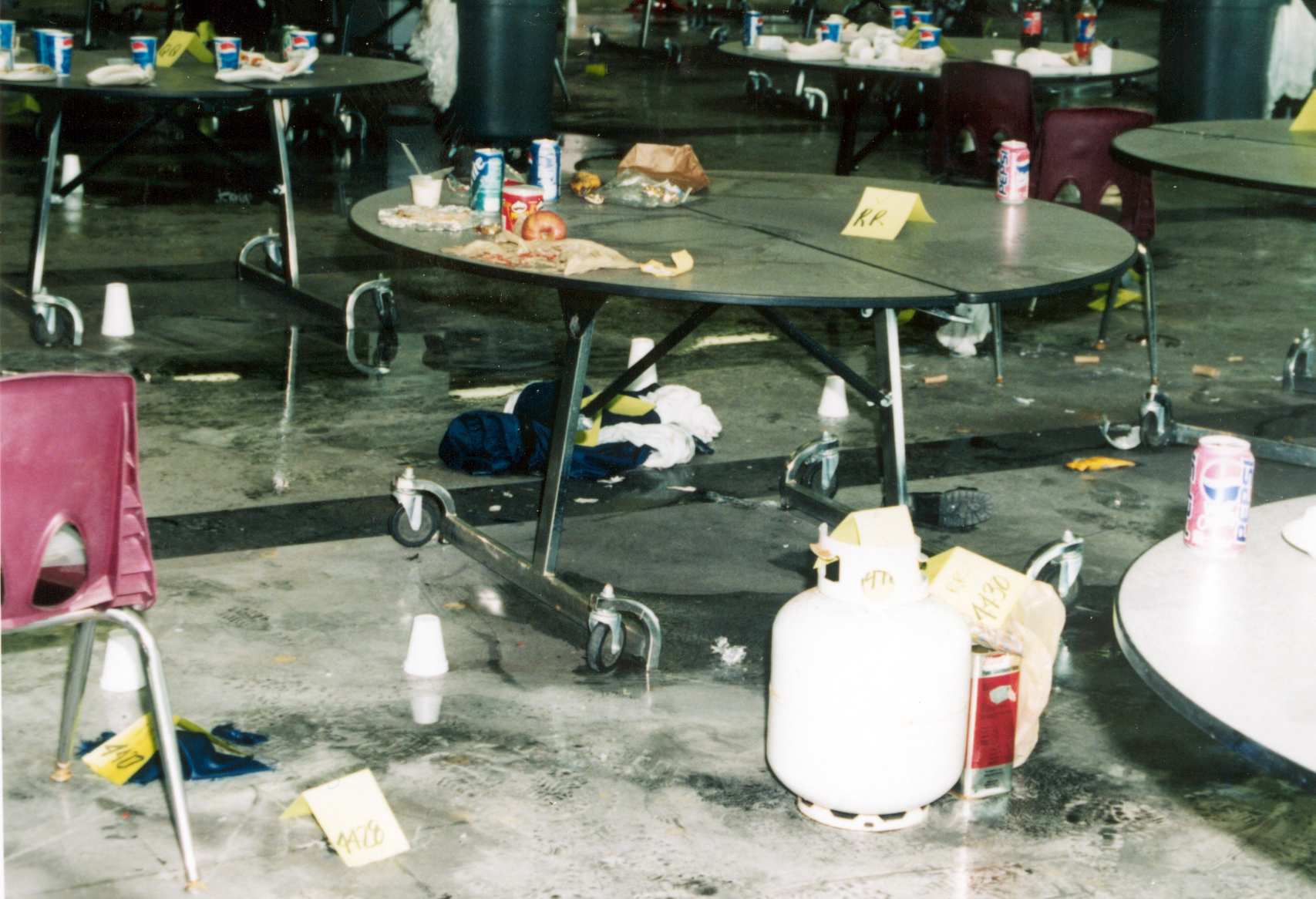 The large 20-lb propane bomb and the second complete bomb/duffel bag beside a nearby table did not explode.

Harris and Klebold were in the cafeteria about two and one-half minutes.  They walked back up the stairs and to main office area to the east.  A lengthy 911 phone call made by a school secretary and an unarmed school security officer from the main office reported shots fired in the office, into the ceiling and in the art hallway to the north between 11:53 a.m. and 11:55 a.m.

According to the Sheriff’s Office dispatch tape, law enforcement officers on the east side of the school reported noises and shots coming from the school’s northeast side at 11:53.

Klebold and Harris’ movements continued to be random.  They returned to the cafeteria at 11:56 a.m.  Their images, captured once again on the cafeteria’s security cameras, show a defeated posture.  The bombs did not explode, the sprinkler system put out the fire caused by the gasoline and fuel explosion, and the damage seemed to be minimal compared to their original plan.  The videotape shows the suspects standing in the cafeteria, then walking back towards the kitchen area for less than 30 seconds and then back up the stairs to the second floor at precisely 12:00 noon.

Klebold and Harris returned to the library where they fired through the library windows at law enforcement officers and paramedics outside the school.  Shots were fired between 12:02 and 12:05 p.m.  After that, no gunshots attributed to the gunmen were heard.

At this point, the only survivors in the library were Lisa Kruetz, Patrick Ireland, Patti Nielson and three other employees hiding in back rooms of the library.  The survivors were unable to pinpoint any specific times they heard gunfire and could not tell the difference between the suspects’ gunfire and SWAT’s cover gunfire.  Because of the cover fire occurring throughout the rescues, the witnesses were unable to pinpoint when Harris and Klebold killed themselves.

At 12:08 p.m., a smoke alarm on the ceiling of the school library is activated. The smoke alarm is above the area where the bodies of the suspects are later found. A small fire from a Molotov cocktail presumably activated the alarm. The “cocktail,” lit by one of the gunmen, was placed on a library table.  Evidence shows that when the glass bottle holding the cocktail got hot enough to break, the liquid inside the device spilled and started a small fire. A thorough investigation by a CBI arson investigator determined that there was evidence on the table and around the gunmen’s bodies indicating that the gunmen took their own lives before the fire occurred on the table.  Additionally, the small fire from the Molotov cocktail is the only event that can be attributed to the fire alarm going off at 12:08 p.m. in the same area.

The Coroner’s findings reported that Klebold and Harris’s deaths were consistent with self-inflicted gunshots.  Each died of a gunshot wound to the head.