The hallway events were compiled after reviewing reports of those students and staff who were in the hallways when the shootings at Columbine High School began.  The purpose was to identify the chronological movements of the gunmen throughout the school.

Twenty-six witnesses to significant events, which occurred in the hallways, particularly the actions of Harris and/or Klebold and their movements, were identified.  Some of these witnesses observed events from classrooms and others were in the hallways as the events unfolded.  There were also witnesses who were in the cafeteria when the shootings began; however, they quickly left the cafeteria and observed events elsewhere. The hallway critical witnesses are comprised of two teachers, one secretary, one Campus Supervisor and 22 students.

Two of those witnesses, Stephanie Munson and Dave Sanders are also victims.

Two suspects were identified as being present in the hallways of Columbine High School that day.

Of the 25 living witnesses, eight positively identified Dylan Klebold as the person they saw in the school hallway. Klebold was seen either in possession of a weapon, shooting a weapon, or was in the area where gunfire or explosions were heard.  Nine additional witnesses described seeing a suspect who matched Klebold's description.

Of the same 25 witnesses, five positively identified Eric Harris as the person they saw in the school hallway.  Harris was seen either in possession of a weapon, shooting a weapon, or was in the area where gunfire or explosions were heard.  Seven additional witnesses described seeing a suspect who matched the description of Eric Harris.

Summary of Events Which Occurred In the Hallways

The following is a chronological account of what is believed to have occurred in the hallways of Columbine High School on April 20, 1999, based on statements of witnesses who were in the hallways and classrooms during the incident as well as ballistic evidence.

Class was in session for those students who did not have the first lunch period so there were not many people out and about in the school. Up to this point, the entire situation had taken place outside and no one inside the school, other than in the cafeteria, yet realized there was a problem.

A student standing near the library entrance saw Brian Anderson, injured by glass and shrapnel from the shattered west doors, stagger south down the hallway in front of the library.  She also saw teacher Patti Nielson run into the library’s main entrance before she herself decided to run.  The student ran to teacher Dave Sanders who was at the top of the cafeteria stairs.  Sanders told her to get downstairs.

Student witnesses who entered the north main hallway from adjoining classrooms saw Klebold and Harris standing just inside the school’s west main level entry doors.  Both suspects, they recalled, were armed with guns. Students reported seeing Klebold fire a semi-automatic weapon toward the students to the east and south down the library hallway.  Witnesses heard bullets hitting lockers and hard objects in the hallway as they ran for cover. 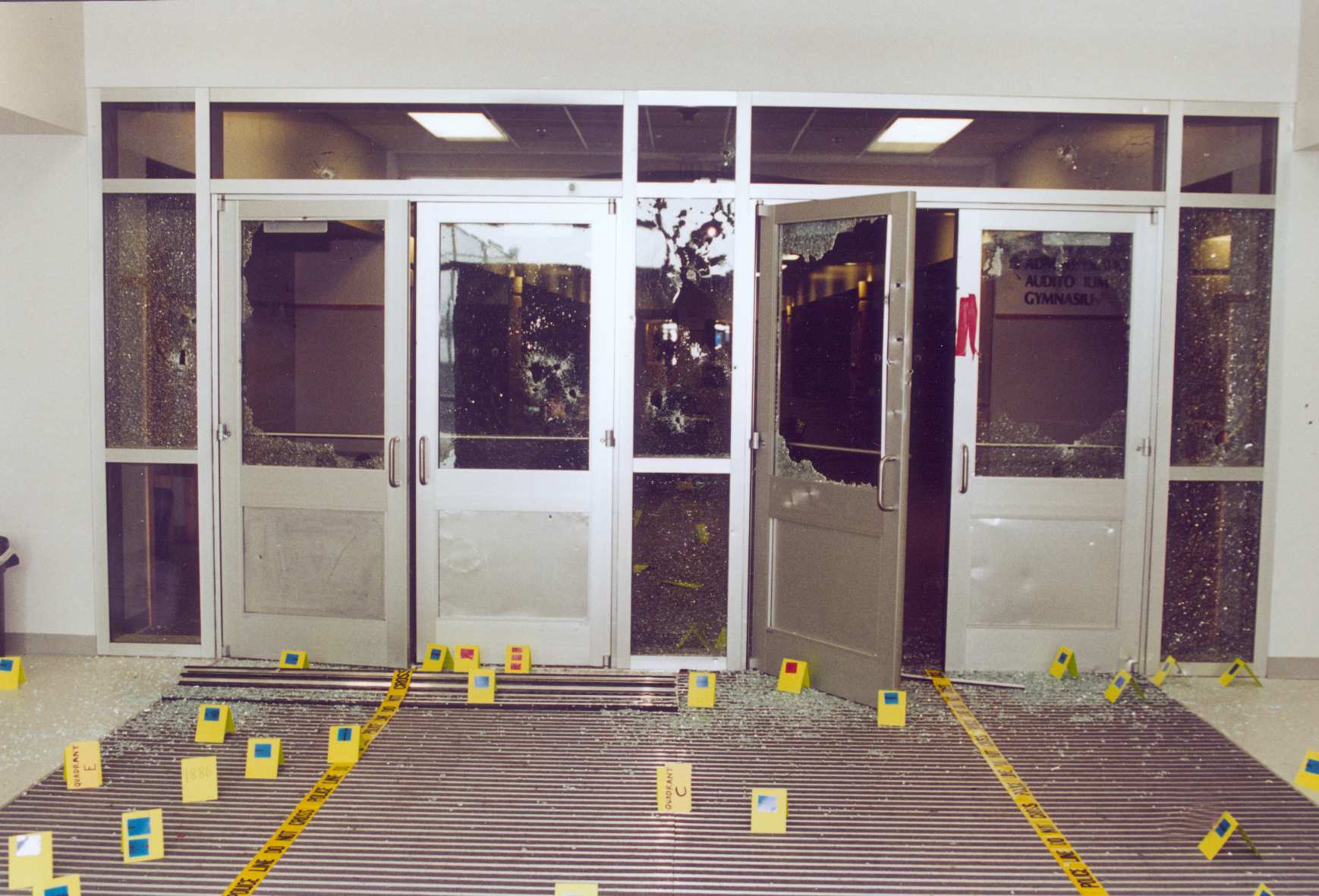 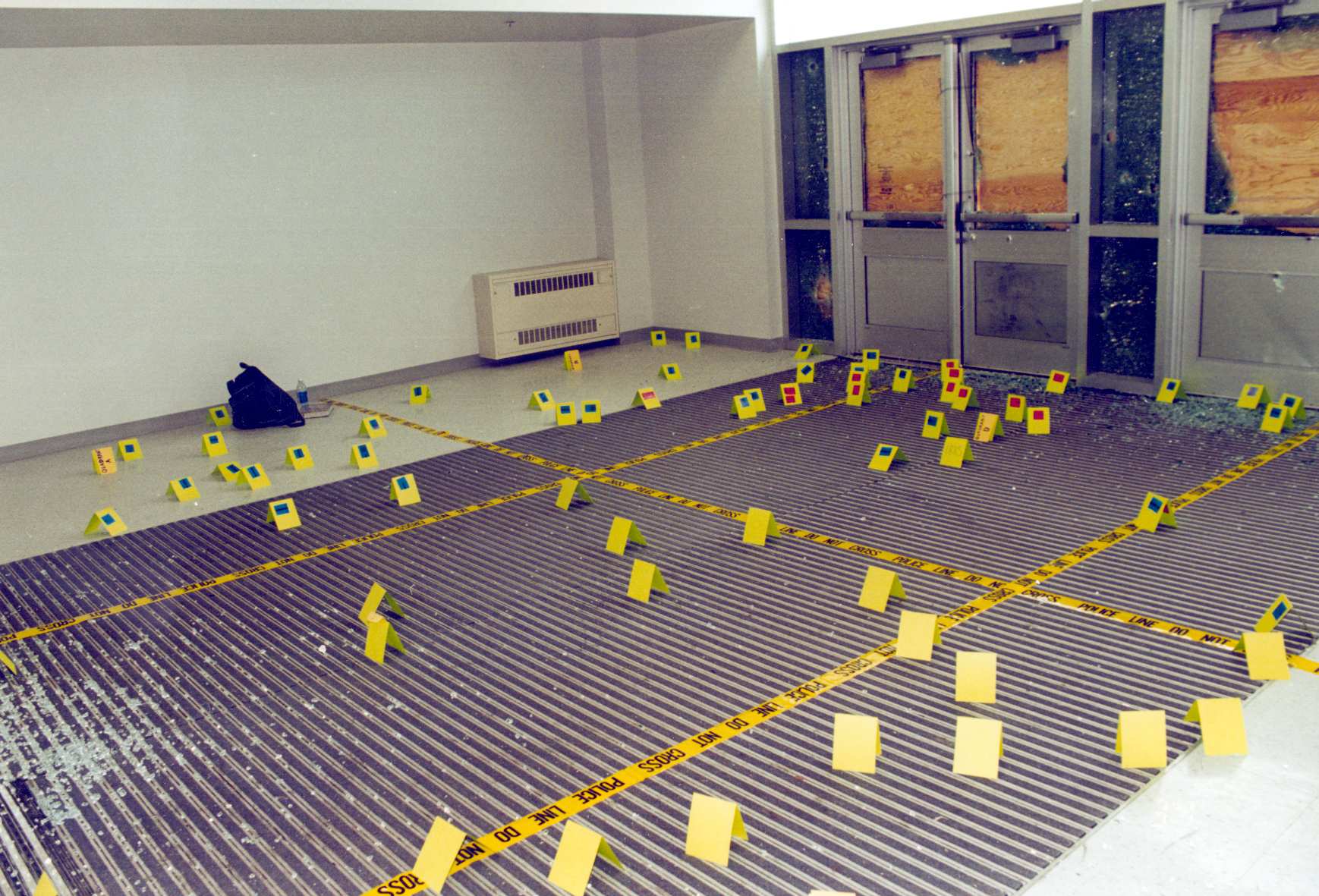 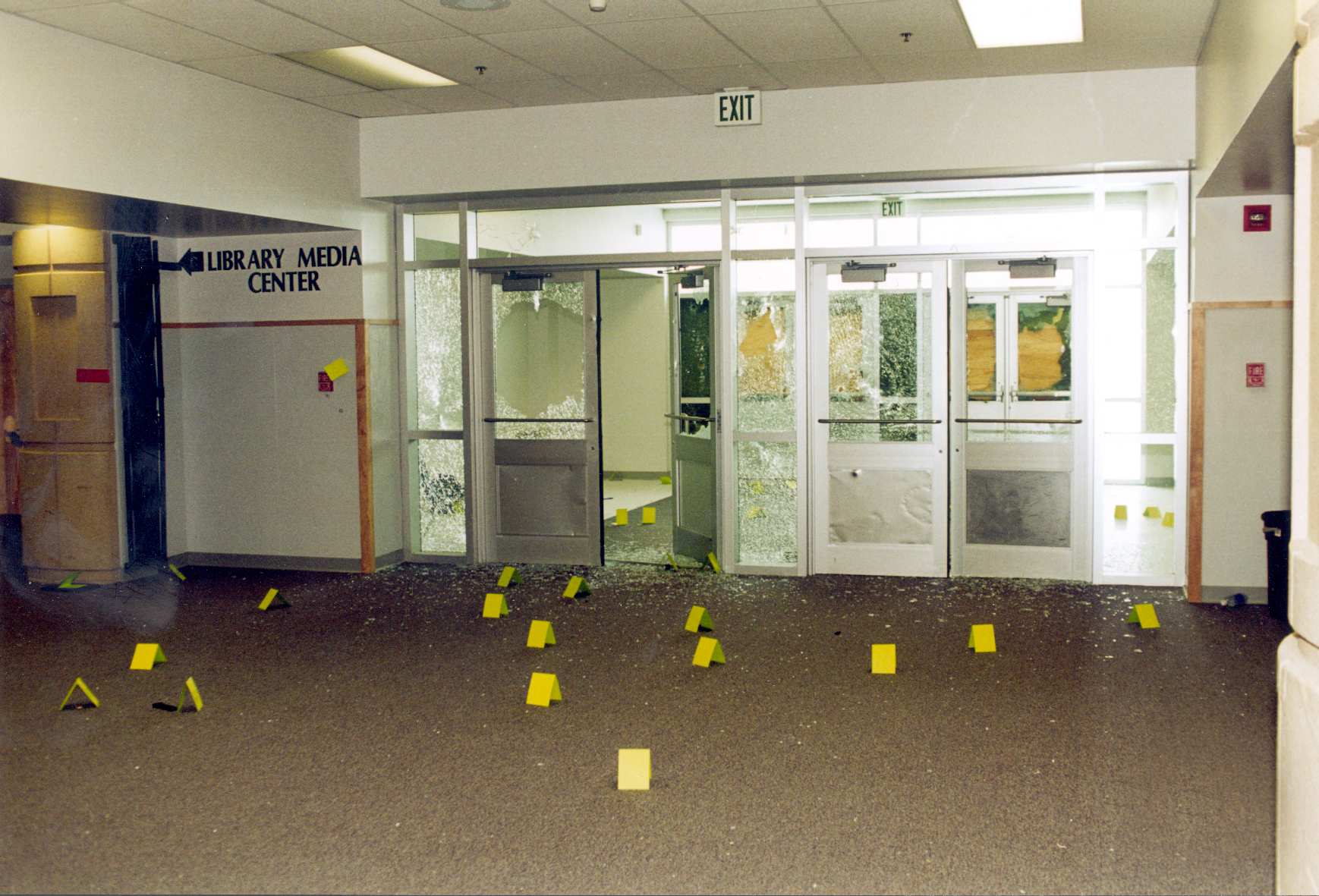 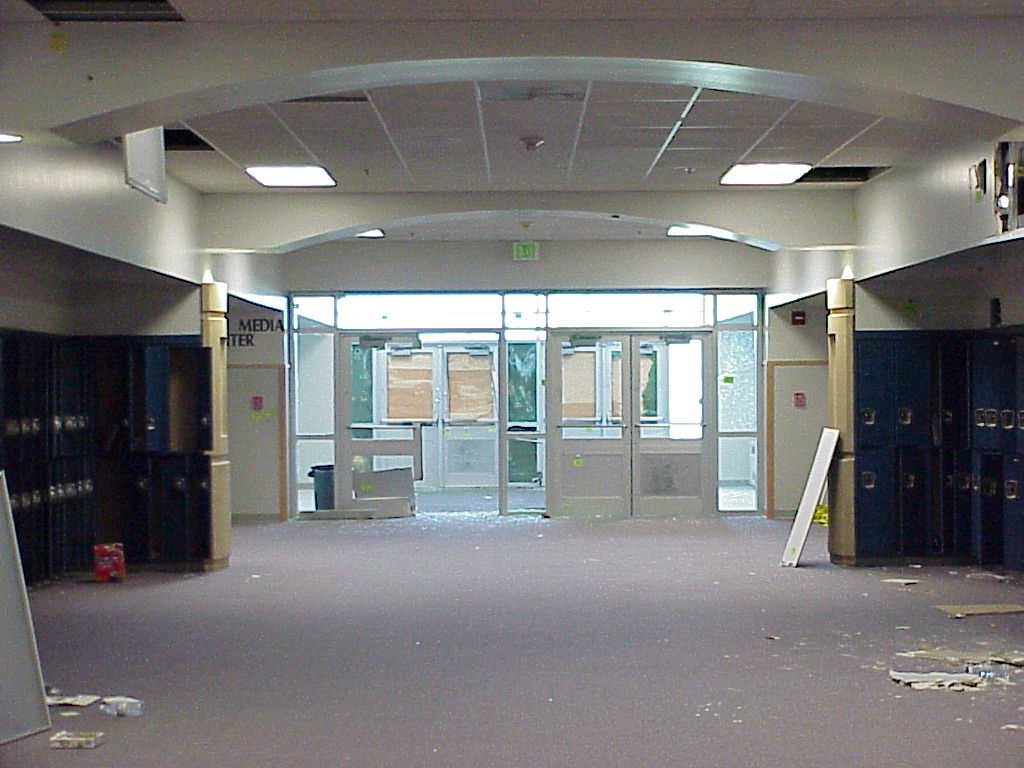 Student Stephanie Munson came out of her physics lab and was walking down the technology lab hallway to the photo lab in the north main hallway.  She was shot as she ran through the main lobby and out the double glass doors at the school’s main entrance.

A student in the gym hallway observed Klebold and Harris walking east down the north hallway.  Both were firing weapons to the east.  And both were laughing.

A student who was in the counseling hallway saw students in the north hallway running east through the lobby. Klebold was running behind them, but came to an abrupt halt near a bank of phones at the entrance to the main lobby area. 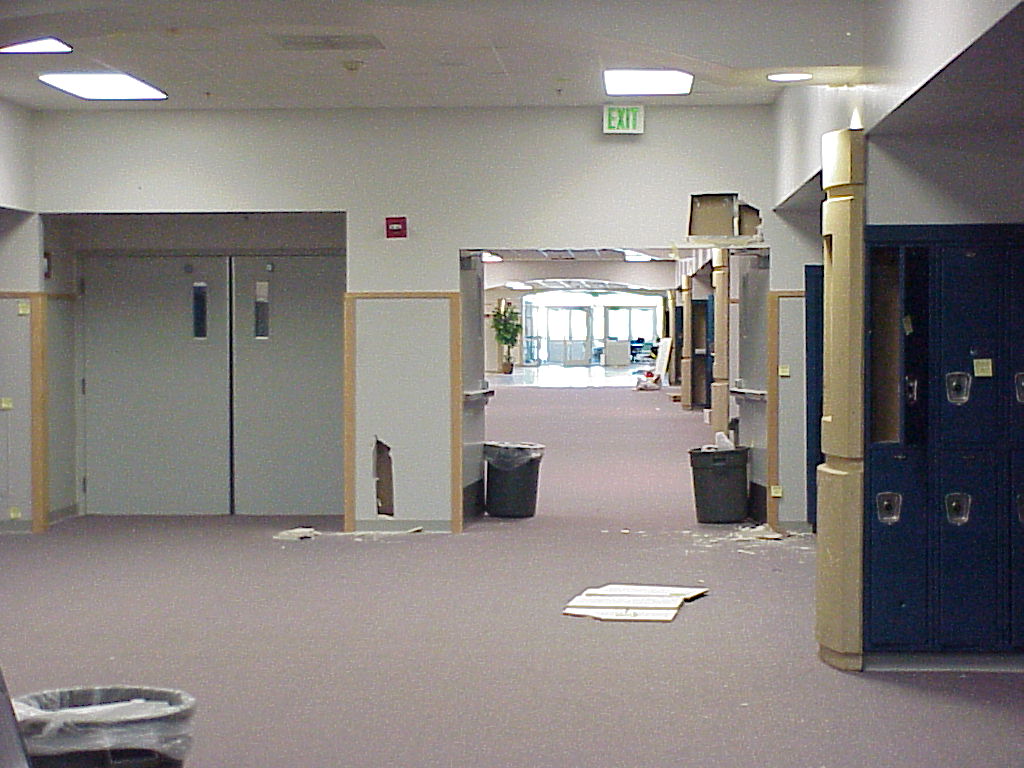 Yet another student, on the telephone with her mother, glanced up in time to see the sleeve of a black trench coat shooting a TEC-9 towards the main entrance of the school.  She dropped the phone and hid in a nearby bathroom until she could no longer hear any activity in the hallway.  The gunmen, she assumed, had turned around and gone back the other way. “Mom, there’s a shooter in the school.  Come pick me up,” she whispered through the phone to her mother before escaping through the east doors to the outside.  Her mother’s cell phone bill showed this call was made between 11:23 a.m. and 11:26 a.m. and lasted 3.8 minutes.

Klebold was last seen running west down the north main hall in the direction of the library.

While Klebold was running towards the library hallway, teacher Dave Sanders had come up the stairway from the cafeteria to the south main hall in an effort to direct as many students as possible to safety.  One student ran with him up the stairs and to the right north in the hallway in front of the library.  The student running alongside Sanders stated that she saw Klebold standing by the west doors holding his gun with both hands.  He began shooting a “rapid firing black gun” in their direction, and they both turned around and ran back toward the stairway.

As Sanders was starting to turn the corner from the library hallway, he was mortally wounded.  Ballistics cannot positively identify the bullets or the weapon used to shoot Sanders.  Evidence indicates that both Klebold and Harris at some point fired their weapons south down the library hallway.

Sanders was able to crawl to the corner of the Science hallway where a teacher helped him into one of the science classrooms.  A group of students, including two Eagle Scouts, Aaron Hancey and Kevin Starkey, gathered around him, tending to his injuries and administering first aid.

In the meantime, Harris and Klebold walked up and down the library hallway, randomly shooting and detonating explosives.  There was no one in this hallway anymore.  Everyone had either ducked into classrooms to hide, barricading themselves behind locked doors and uprighted tables, or had run out the east exits of the school and across the street to safety at Leawood Park.  Others escaped to the music room or choir room.  Still others hid in the auditorium.  They may have been in different places but, for the most part, all were hidden.

Investigators later scrutinized a 911 call made from the school’s library.  From the tape, the investigation shows that Harris and Klebold spent almost three minutes in the library hallway randomly shooting their weapons and lighting and throwing pipe bombs. They threw two pipe bombs in the hallway and more over the stairway railing down into the cafeteria. 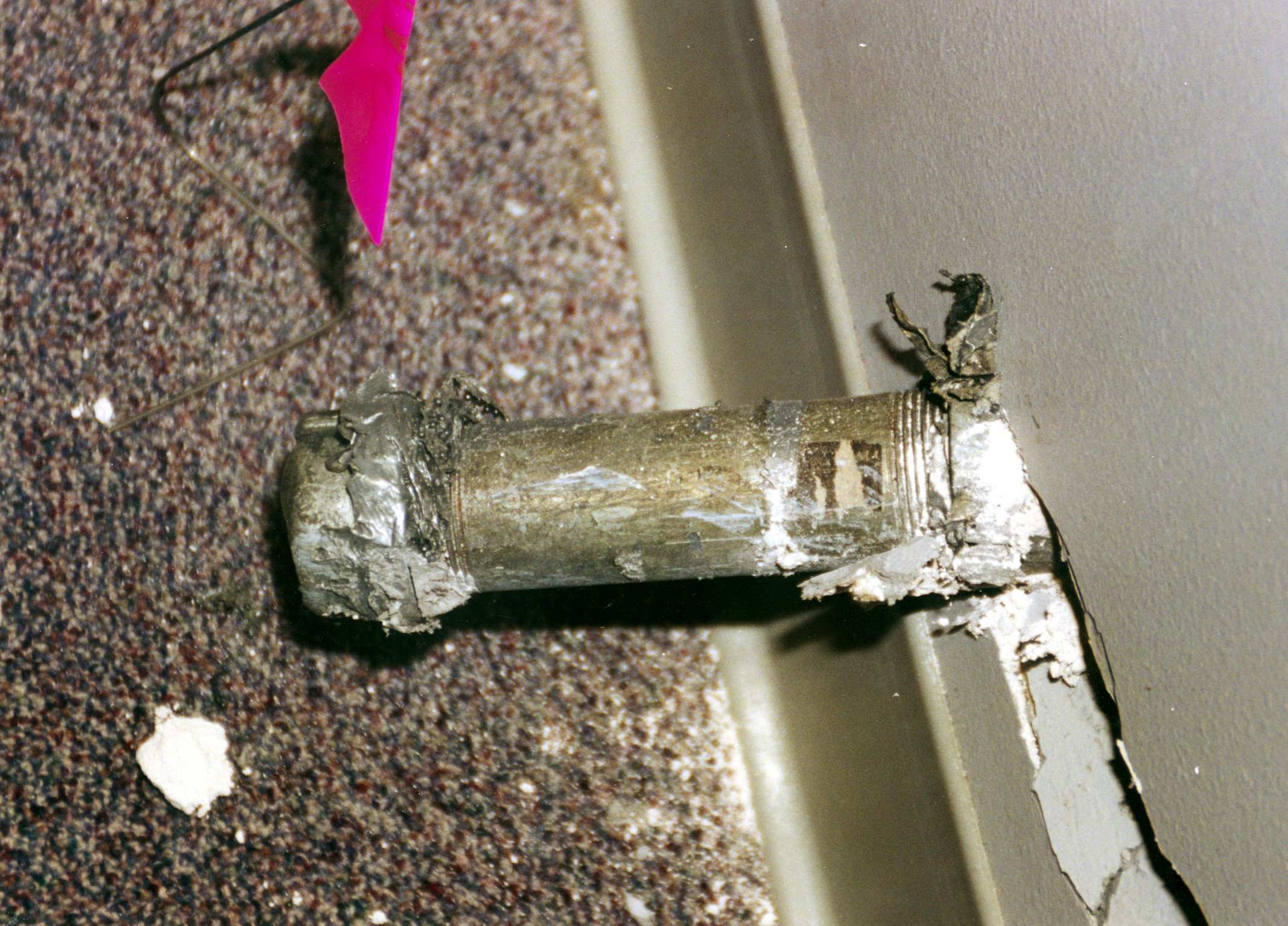 Investigators believe that at this point, the gunmen no longer had a definite plan in mind.  Their diversionary bombs secretly placed in the Wadsworth greenbelt were not successful and did not divert attention away from the school for any measurable amount of time.  The massive propane bombs placed in the cafeteria did not explode.  The police arrived on scene much sooner than the killers anticipated.  They had been shot at and they were not sure what to do next.

According to the investigation, the murders that took place in the library were not planned.  The library was never mentioned in any of the plans or earlier writings of the gunmen.