The Library Team was led by Arvada Police Department Russ Boatright and assisted by FBI Special Agent John Elvig and JCSO Investigator Diane Obbema.   There were three additional investigators assigned to this team for varying terms based on availability.  The library team was given the responsibility of investigating the events which transpired in the Columbine High School library on April 20, 1999.  In order to accomplish that task, the library team conducted detailed interviews with surviving victims and witnesses.  In conjunction with the victim/witness interviews, the library team utilized the 911 tape, physical evidence collected at the scene, ballistic reports, medical reports and autopsy reports to determine the sequence of events as they occurred in the library.  In addition, the team consulted with the Jefferson County Coroner and various pathologists to assist in determining the suspects' actions while in the library. 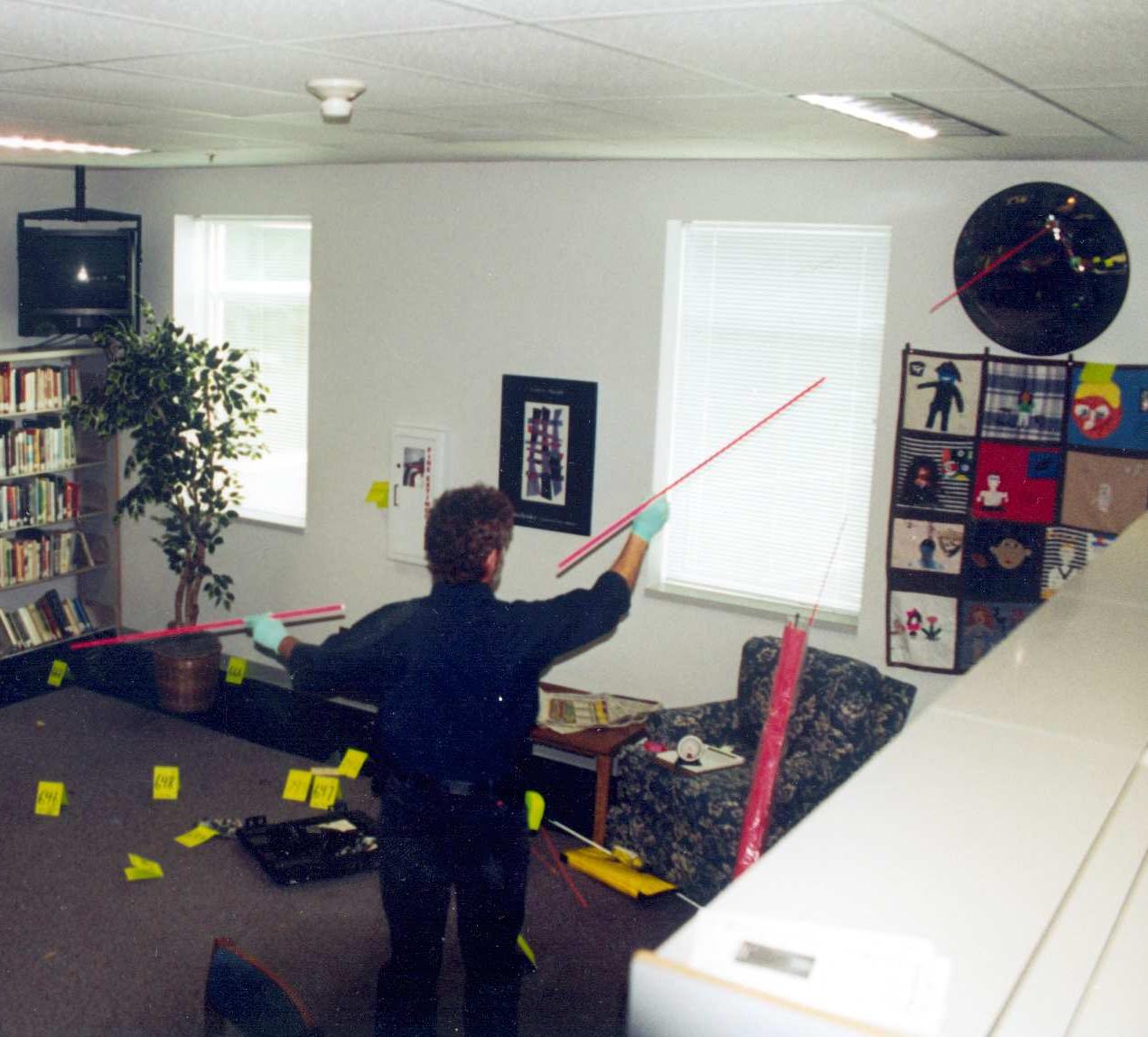 The library team determined there was a total of 56 people present in the library at the time the suspects entered.  Of the 56 people present, four were faculty/staff (all female), while the remaining 52 individuals were students.  In terms of the 52 students, 24 were male, 28 were female.  Students were of various grades and ranged in age from 15 to 18.  All of the witnesses in the library were determined to be critical, as all of them observed movements and actions of Harris and Klebold.

In respect to those present in the library, 12 received injuries of varying degrees while 10 received fatal injuries.  The injured were identified as follows:

The deceased were identified as follows:

Throughout the investigation there were many witnesses who had common perceptions and misperceptions of the events during the shooting.

The following is a chronological account of what is believed to have occurred inside the Columbine High School library on April 20, 1999, based on a conglomerate of witness statements. The library team did not conduct an investigation related to the suspects' activities after leaving the library.  Additionally, the team did not conduct any investigation into the deaths of Eric Harris or Dylan Klebold.

Normally, the school library at Columbine was much more crowded than it was on April 20 and students could have trouble finding a table at which to sit.  But on this day, there were empty chairs.  Because of the nice weather, many students had opted to be outside instead.

At approximately 11:20 a.m., students and teachers in the library began to hear what was described as popping noises coming from the northwest outside area of the school. Witnesses also described hearing what they later believed were gunshots and explosions inside the school.  Some of the witnesses described hearing those sounds emanating from the cafeteria or commons area, in addition to directly outside the library.

Teacher Patricia Nielson, already injured, ran into the library and called 911.  In between telling the dispatcher what was happening, she screamed at the students that there were students with guns and for everyone to get under the tables.  Nielson knew they had nowhere to go.  The last time she saw the gunmen, they were outside (near the emergency exit from the library) and they were heading inside the hall that led to the library.

In reflecting back, many of the students in the library, like so many in the school that day, initially thought the commotion they were hearing was a senior prank.  As the realization hit that real bullets were being fired, they followed Nielson’s orders and got under the tables.  Almost all the students initially thought that by getting under the tables they were hidden from the gunmen’s view.  They were not.

Teacher Peggy Dodd was in the library when she looked out the window and saw Klebold “standing on the hill, just shooting.”  She recognized him as a student in one of her computer classes the previous year and remembered him as a troublemaker who hacked into computers and wore tall “Nazi” boots and an overcoat.  According to Dodd, Klebold was holding a weapon with both hands and, using a sweeping motion, was pointing it toward the south parking lot.

Dodd also recalled seeing teacher Dave Sanders running down the hallway to the north in front of the library.  He motioned with his hands that they should stay in the library.  Sanders, at that time, did not appear wounded.

Nielson hid under the front counter just inside the door and several times she peeked over the counter to ensure the students were hidden under tables. By then, Harris and Klebold were in the hall directly outside the library shooting their weapons and throwing pipe bombs. Harris threw a lit device, which some students described as resembling “dynamite,” in a southerly direction.  Moments later there was an explosion in the hall directly outside the library.  Smoke was pouring into the library and fire alarms began to wail.

At 11:29 a.m. the gunmen entered the school library yelling “Get up!”  Some witnesses reported hearing one of them yell, “Everyone with a white cap or baseball cap, stand up.”  Others reported hearing, “All jocks stand up.  We’ll get the guys in white hats!”  When no one stood up, a witness heard one of the gunman say, “Fine, I’ll start shooting.” 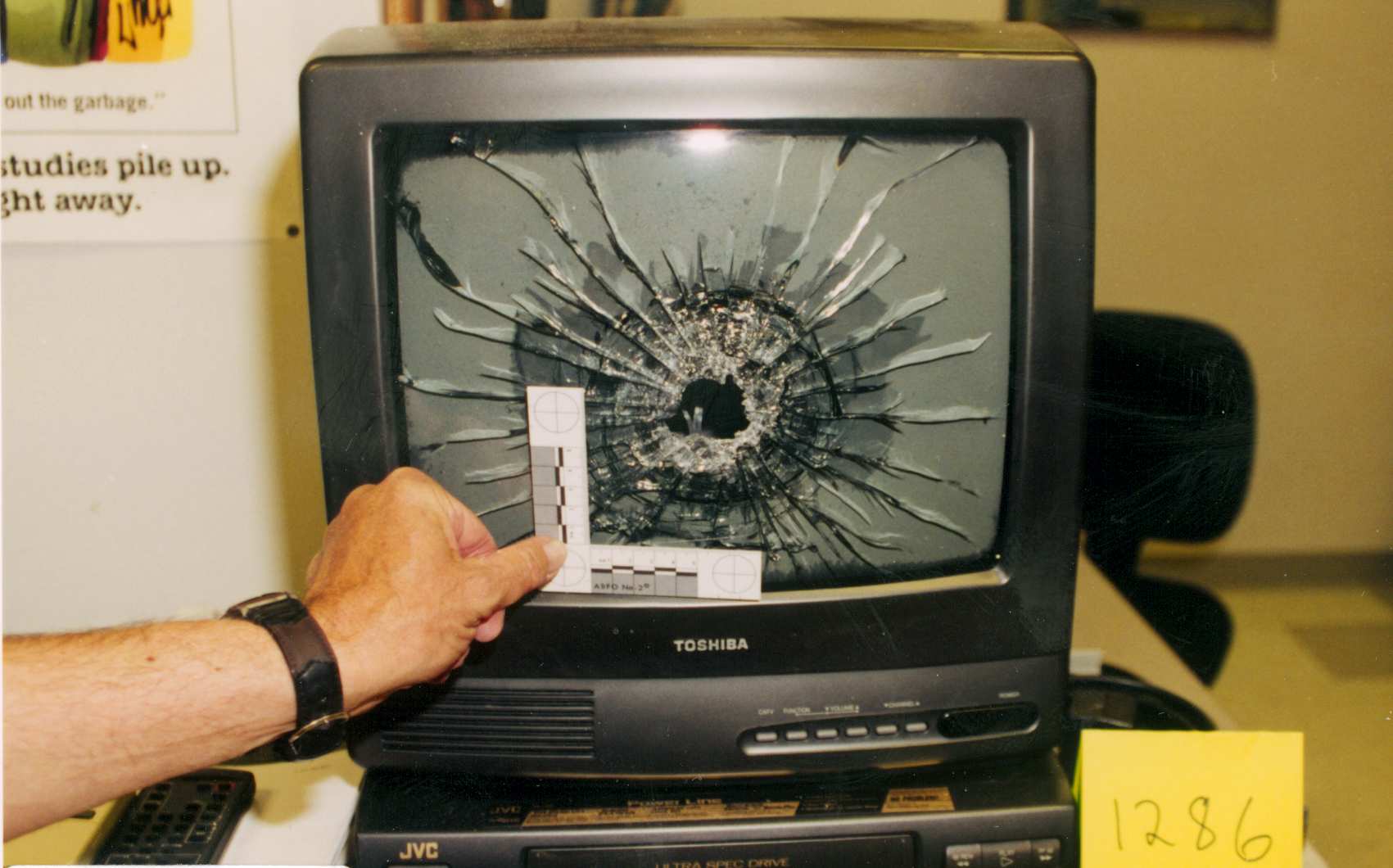 Harris fired shotgun rounds down the length of the front counter.  Evan Todd, crouched behind a copier stand, was injured by flying wood splinters.

The gunmen then walked through the library toward the west windows.  Student Kyle Velasquez was the only student not hiding under a desk or table.  Instead, he was sitting at the north computer table and was shot by Klebold as he walked by him to the windows.

Harris and Klebold set down their backpacks, filled with ammunition and Molotov cocktails, on one of the computer tables and approached the library windows. Harris was down on one knee shooting out the west library windows toward law enforcement officers and fleeing students. Klebold subsequently positioned himself next to Harris and fired out the window as well.  At this point, Klebold took off his trench coat.

Also at this point, teacher Patricia Nielson, who initiated the 911 call from the library, dropped the phone and no further communication with the dispatcher occurred.

Harris walked over to table 19 where he bent down and saw two frightened girls.  He slapped the table top twice, said, “Peek-a-boo,” and fired, killing Cassie Bernall.  After shooting Cassie, Harris made a comment about hitting himself in the face.  Investigators believe Harris broke his nose as a result of the “kick” from the shotgun when he bent to fire under the table.

He then turned to Bree Pasquale who was sitting on the floor because there was not enough room under the nearby table.  Harris asked her if she wanted to die.  As the girl pleaded for her life, she observed blood flowing from his nose.  She later said that Harris seemed disoriented for a moment but was able to refocus when Klebold called his attention to table 16 under which two boys were hiding.  One of the boys, Klebold announced, was black.  Bree also recalled Harris laughing and saying, “Everyone’s gonna die” and “We’re gonna blow up the school anyway.”

Harris threw a small CO2 cartridge south which rolled under table 15.  Makai Hall grabbed it and threw it further south away from everyone where it exploded. Witnesses next described Harris as moving south in the library to the west bookshelves where he jumped up on the shelves and began shaking them back and forth while swearing.  He then walked between the bookshelves where witnesses lost sight of him.  Witnesses did report hearing books being shot in the area near the west set of bookshelves shortly after Harris walked into that area.

Harris and Klebold left the west area of the library and walked east toward the entrance.

Klebold shot out the display cabinet near the front door before he fired toward table 1, injuring Mark Kintgen. His attention then turned to table 2 and he fired under that table.  The first shot fired injured Valeen Schnurr and Lisa Kreutz.  Walking beside the table, Klebold proceeded to fire as fast as his gun would shoot, killing Lauren Townsend.

While Klebold was at table 2, Harris stopped near table 3 under which two girls were hiding.  He looked under the table and, upon seeing them, simply said, “Pathetic," and walked away.

Valeen, who was critically hurt, began to cry, “Oh God, help me.”  Klebold, who had shot her, came back and taunted her about her belief in God.  He then walked away.

Harris was seen stepping toward table 6 and firing under the table, injuring both Nicole Nowlen and John Tomlin.  Tomlin came out from under the table and Klebold shot and killed him.

Harris walked around table 6 and shot and killed Kelly Fleming, who was near table 2 where three students had already been shot.  He then fired under table 2, again hitting Lauren Townsend  and Lisa Kreutz, and wounding Jeanna Park as well.

Harris and Klebold left the library’s east area and entered the center section, reloading their weapons at table 13.

Harris, noticing a student under table 11, told him to identify himself.  The student, who was an acquaintance of Klebold, identified himself and asked Klebold what he was doing.  Klebold replied, “ Oh, just killing people.”  The student asked if Klebold was going to kill him.  Klebold told him to get out of the library, which he did.

Both then shot under table 14, injuring Jennifer Doyle and Austin Eubanks and killing Corey DePooter.  Corey was the last killed.  He was killed at 11:35.

The gunmen went behind the counter and had a confrontation with Evan Todd, who had moved under the counter after being injured. The gunmen taunted him and discussed whether or not to kill him.  They walked away instead and Klebold fired back into the “kitchen” area of the library, striking a television.

Harris and Klebold were heard talking about going to the school’s commons area. Klebold picked up a chair, threw it on top of a computer terminal on the main counter under which Nielson was hiding, and the two walked out of the library’s main entrance into the hallway.  It was 11:36. Only 7 ½ minutes had passed, the time it took the gunmen to shoot and kill ten people and wound 12 more.  There were a total of 56 people in the library.  The gunmen had enough ammunition to kill every single one of them, but they didn’t.

When the gunmen left, the library was filled with smoke and the fire alarms were blaring.  The students’ ears were ringing, the injured were moaning, and yet almost all of them described it as eerily quiet.  The gunfire had stopped.  The gunmen’s taunts and laughter had stopped.

The Living Escape from the Library

All of the students and teachers who left the library went through the emergency exit, which leads to the west entrance where the gunmen first entered the school.  They ran to the safety of the waiting patrol cars and armed deputies who could give them protection and lead them to safety.

The kids gave the deputies an important fact.  The gunmen were not in the library anymore.

A short time later Nielsen, who had initiated the 911 call from the library, crawled into the break room ("kitchen") and hid in a cupboard.  Library technician Carole Weld and assistant Lois Kean remained hidden in the television studio.  Teacher Peggy Dodd was hiding in the periodicals room.  All four remained in the library until they were evacuated by SWAT.

Patrick Ireland, who slipped in and out of consciousness slowly made his way to the west window and fell out into the arms of SWAT at 2:38 p.m.  Lisa Kreutz, the last of the wounded, was rescued when SWAT entered the library at 3:22 p.m. Lisa was being transported to Denver Health Medical by 3:37 p.m.