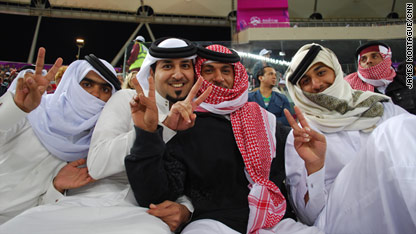 The ticker-tape fell on the pitch at the Khalifa Stadium in Doha, Qatar, with the Japanese victorious, the Australians vanquished.
FULL STORY 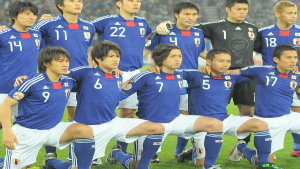 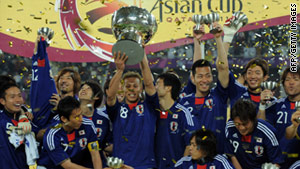 A volleyed goal from substitute Tadanari Lee in the second half of extra time earned Japan a 1-0 victory over Australia and a record fourth Asian Cup Saturday.

With his softly-spoken voice, rock-star lifestyle of TV endorsements, the 35-year-old captain of India is an icon in his homeland.

Japan secured their place in the final of the Asian Cup after a dramatic penalty shoot out victory over South Korea.

Harry Kewell scored a dramatic extra-time winner as Australia beat holders Iraq 1-0 in the quarterfinals of the Asian Cup in Doha Saturday.

Japan recovered from having a player sent off to snatch a last-gasp 3-2 win over Asian Cup hosts Qatar in Doha and reach the semifinals on Friday.

Video and image footage of the 2011 Asian Cup in Qatar.

For a man who had spent the first 13 years of his life growing up in pre-Revolution Iran, Afshin Ghotbi's first job in Iranian football was all about going back to basics: He had to relearn his mother tongue, Farsi, almost from scratch.

Holders Iraq sealed their place in the last eight of the Asian Cup in Doha after a narrow 1-0 victory over North Korea.

Australia and South Korea claimed quarterfinal places at the 2011 Asian Cup with victories in Tuesday's final round of Group C matches in Qatar.

Sitting in the lobby of his team's hotel, it is clear why Baichung Bhutia is often compared to David Beckham.

Sitting in the lobby of his team's hotel, it is clear why Baichung Bhutia is often compared to David Beckham.

Iran coach Afshin Ghotbi hailed his team after qualifying from the toughest group at the Asian Cup in Qatar, becoming the first team to reach the quarterfinals after beating North Korea on Saturday.

Australia fought back to earn a 1-1 draw with South Korea on Friday that edged two of the Asian Cup's title favorites towards the quarterfinal stage in Qatar.

Saudi Arabia's quest for a fourth Asian Cup title, and first since 1996, is over after they slumped to a 1-0 defeat at the hands of Jordan in Doha on Thursday.

Neighboring Iran and Iraq faced each other on the soccer pitch in one of the most highly-awaited games of the 2011 Asian Cup in Qatar.

Iran's bid for a record fourth Asian Cup final title began with a 2-1 victory over neighbors Iraq in Qatar on Tuesday, thanks to a late goalkeeping error by the defending champions' Mohammed Kassid.

There are football rivalries and then there is the rivalry between Iran and Iraq.

Few would argue that football is the planet's true global game. From Baghdad to Buenos Aires it is watched, played, argued about, loved and hated with an intensity that no other sport can match.

Tim Cahill scored twice as Australia opened their Asian Cup campaign with a convincing 4-0 win over India in their Group C match in Doha Monday.

Saudi Arabia and Japan made stuttering starts to their bids to win a record fourth Asian Cup title on Sunday.

China took advantage of a Kuwait sending-off to make a winning start to the 2011 Asian Cup on Saturday.

Host nation Qatar began their Asian Cup campaign in the worst possible fashion, losing 2-0 to Uzbekistan in their opening Group A match in Doha.

On Friday, the biggest football tournament you've probably never heard of will begin as 16 nations -- from Japan's wild Pacific coastline to the faded grandeur of Syria's Mediterranean beaches -- converge on the tiny emirate of Qatar for the 2011 AFC Asian Cup.