Where the Jobs Are 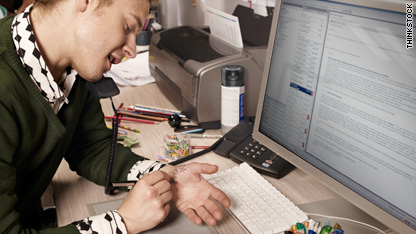 Why 3 jobs are better than one 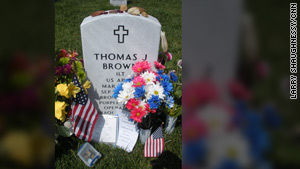 Special mementos left at Arlington are in Army's painstaking care 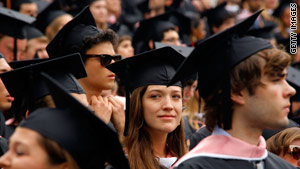 CNN's team of photojournalists discover stories of Americans finding ways to get by in tough economic times.

An ex-ad executive has found a new, more rewarding, career as an EMT. Photojournalist Tawanda Scott has the story.

New technological tools are often hailed as breakthroughs that will revolutionize our daily lives. Think of the iPhone's arrival a few years ago. Many of these much-heralded items fizzle away with little notice. And then others sneak up on us.

CNN photojournalist David Ruff introduces us to a couple whose cupcake business is booming.

College senior Kaitlin Ripple had always known the business world was competitive. Yet when she started Baldwin-Wallace College, located in a suburb outside of Cleveland, Ohio, she had no way of knowing how cutthroat it would be when she entered the "real world."

New opportunites on the open road

CNN photojournalist Bob Crowley introduces us to two men who, after being laid off, are climbing aboard the big rigs.

Some laid-off workers and their families are living in buses and RVs. Photojournalist John Torigoe has the story.

Clowns juggle multiple jobs to get by

CNN photojournalist Oliver Janney profiles a man who inspires people down on their luck in hard times.

Fighting back against unemployment

CNN photojournalist John Bena profiles an out-of-work truck driver who's fighting back in his own unique way.

There are two kinds of business travelers. Those who have a goal in mind when collecting hotel and airline points, and those for whom collecting as many points as possible is the point.

Since the start of the recession in December 2007, the United States has lost 8.4 million jobs. Yet, employers are finally feeling a renewed sense of hiring optimism, according to a new survey from CareerBuilder and USA TODAY.

Airline points keep him off the street

A road warrior loses his job and his home, but airline points keep a roof over his head.

While some people take their time choosing a job or career based on their passions or goals, others just want to know where they can get a job and when.

Tax time can be a painful time for many of us, and it's especially tough for people without jobs. If you're unemployed, there are a few twists and turns in the tax code that can work to your benefit.

More than 3,000 people turned out in downtown Houston, Texas, Wednesday for a job fair designed for convicted felons.

One thing about the hiring process is true: It leaves much room for speculation.

The stimulus package is one year old, and if you're still looking for work, you can look for jobs funded by stimulus spending. To find the jobs, you'll have to follow the money.

Interviewing for a job comes with several question marks. What do I wear? How should I answer this question? How long will this take?

Every day, William Schmidt gives job seekers with a not-so-great job history, a gap on their résumé or even a criminal record, a second chance.

Are you an online enthusiast? The dictionary doesn't have a definition for it just yet, but if it were to exist, I suspect it would look something like this:

I'm probably as sick of writing about job loss as you are reading about it. But I have some good news to report.

Earlier this month, in an unexpected bit of good news, a Labor Department report showed a decline of just 11,000 jobs for November, far below any of the job losses posted over the last 23 months.

Google CEO Eric Schmidt talks to CNN's Kiran Chetry about job creation and how the government should spend its money.

President Obama on Friday praised the latest jobs figures that show a drop in the U.S. unemployment rate from 10.2 percent to 10 percent in November.

Why they're still not hiring

Despite signs the economy is imporiving, CNN's Allan Chernoff explains why managers are still hesitant to hire.

It's the oldest trick in the political playbook: Call together a "summit" of fancy people so you'll appear to be focused on work that must get done.

President Obama on Thursday called on business leaders from the private sector to generate ideas that will "accelerate job creation" and stimulate investment in the United States.

Baby boomers, those born between 1946 and 1964, are nearing retirement age. The U.S. Census Bureau estimates that there are 78.2 million boomers, and that every hour, 330 of them turn 60.

T.D. Jakes on the economy

Larry talks with Bishop T.D. Jakes about his advice to those whom have been hit hard by the economic crisis.

Where are the jobs?

CNN's Kitty Pilgrim looks at whether jobs are being created with federal stimulus money.

Despite some signs that the economy is on the mend, a lack of confidence from consumers and companies alike may hamper job growth during the next few months, economists say.

T.D. Jakes on the economy

Larry talks with Bishop T.D. Jakes about his advice to those whom have been hit hard by the economic crisis.

In the early 1990's, I was listening to the Rush Limbaugh radio show when a young man from Youngstown, Ohio, called in to complain about... well, life.

You're probably due for a promotion, right? I don't know you, but if you're like most other workers, you think you deserve a promotion. You are the glue that holds the entire organization together. Everybody knows it.

According to the Bureau of Labor Statistics, 36 percent of unemployed people --or 5.4 million -- had been without a job for 27 weeks or more in September 2009.

When you apply for a job, you know exactly what you're looking for. You want a company you love, great co-workers, a decent salary, a culture where you fit in and, most importantly, you want to love what you'll be doing.

Green jobs in a tough economy

With federal money being poured into "green" jobs, could it help the U.S. economy? CNN's Fredricka Whitfield reports.

Some of the stimulus money from the U.S. government is going to programs that help young adults find jobs.

What White House got wrong

The White House was wrong in its prediction about jobs in America. CNN's Josh Levs has a Reality Check.

An Ohio company transforming its business model will build its headquarters in the town of Greenville.

Elkhart, Indiana, has suffered through a litany of economic bad news and layoffs.

Mary Walker has organized a job fair with a religious twist. The unemployed training manager worked with other members of the Crossroads Church in Loveland, Colorado, to put together a job fair with 20 prospective employers -- and one prayer and encouragement area.

A record number of senior citizens attended a job fair this week in Loveland, Colorado.

For some, winning at a casino doesn't mean a stack of chips; it means a job.

Job fairs are getting more competitive. Recent events across the nation drew thousands of people and one fair was so packed organizers had to turn people away.

'Punch up' that resume

Make your resume stand out

Careerbuilder.com's Jason Lovelace gives job seekers advice on how to make their resume stand out.

One company brings back thousands of jobs to U.S. and airlines get their latest quality ranking. Poppy Harlow reports.

Unemployed people with disabilities are having increasing trouble finding a job.