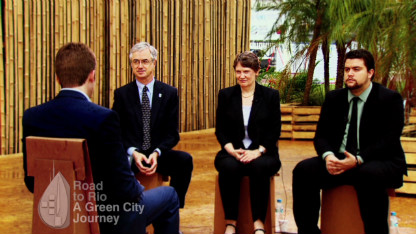 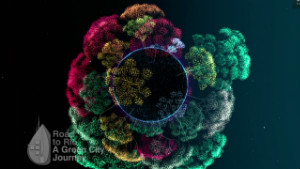 Rio+20: Progress in the private sector 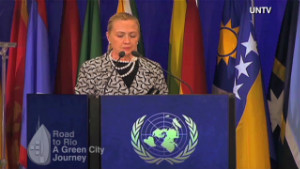 At first glance, Austrian artist Klaus Pichler's spell-binding photographs could be mistaken for a set of stylish advertisements. It takes a moment to digest -- excuse the pun -- that you're staring at pictures of rotting food.

A rigorous green certification system is recognizing the next phase of eco design, which its founders describe as "the world's greenest buildings."

Join the conversation on sustainability

Monita Rajpal explains how viewers can join the conversation around the Rio +20 Earth Summit by using CNN Ecosphere.

From 2009: With a long history of covering bushfires, John Vause offers some insight into Australia's latest wildfires.

Video from April, 2010. The worst floods in decades leave dozens dead in and around Rio de Janeiro.

In August 2003, hospitals were overwhelmed by heatstroke patients as temperatures hovered above 107 degrees Fahrenheit.

How to use CNN's Ecosphere

Join the global discussion on sustainability with hashtag #RIO20. CNN explains how to use Ecosphere.

The Lord Mayor of Melbourne, Robert Doyle, explains how the Australian city has responded to extreme weather events.

Tokyo: 'We are adapting'

Yuko Nishida, from Tokyo's Bureau of the Environment, explains how the city is adapting to climate change.

Errol Barnett explains how to join CNN's Twitter conversation with the ECOSPHERE visualization during #COP17.

For three days from June 20, heads of states, business leaders and civil society representatives will gather in Brazil to tackle the world's environmental problems at Rio+20, the United Nations Conference on Sustainable Development.

Singapore's latest development will finally blossom later this month, with an imposing canopy of artificial trees up to 50 meters high towering over a vast urban oasis.

An old meatpacking plant on Chicago's South Side is being transformed into an eco farm, which its founders says will produce food sustainably, while creating zero waste.

This month's Road to Rio takes us to Mexico. From solar trees to a hotel made from concrete tubes, Philippe Cousteau, Gabriela Frias and Rafael Romo will search for the country's most innovative carbon reducing ideas.

This month, Road to Rio looks at Mexico's biking initiatives as part of its fight against pollution.

From dump to pump in Mexico City

This month on Road to Rio, we looks at the initiatives in place to turn Mexico City's landfill to fuel.

Clamping down on Mexico's polluters

Can the roof of your house help you breathe easier by reducing the amount of harmful pollutants from urban air?

It's as tall as some of L.A.'s highest skyscrapers, but the only residents here are rats and cockroaches.

Visit one of the largest landfills in U.S. and find out how artists in San Francisco are turning trash into treasure.

This month, the Road to Rio is making a stop in the U.S. state of California to discover what cities are doing there to cut carbon emissions. CNN's Isha Sesay, Thelma Gutierrez and special correspondent Philippe Cousteau seek out the best green innovations in Los Angeles, including variety of new car technologies, a bicycle kitchen and smog eating tile. From there, Philippe Cousteau heads to northern California to check out how artists are giving garbage a whole new form and sense of respect. Then he heads to a community that is producing as much energy as it's using in Davis, California. Finally, his assignment really gets tough as he heads to Napa Valley to see how wineries are getting a green makeover. Meanwhile, Thelma Gutierrez visits one of the largest landfills in the country to see first hand exactly where our garbage is going. And Isha Sesay gets a behind-the-scenes tour of Warner Brothers studios to witness the newest green innovations they're implementing. Watch the show at the following times:

Going green on the big screen

Road to Rio tours the Warner Bros studios to find out how the film production is going green.

The University of California Davis welcomes students to its zero net energy community.

CNN's Road to Rio stops in LA, California to find out more about the city's green projects.

The legendary Hanging Gardens of Babylon are the inspiration behind an ambitious plan to grow a rooftop forest high above Beirut's crowded streets.

Behind a Victorian shop front in the Cockney heartland of London's East End hides an urban agriculture initiative that claims to be the world's first farm in a shop.

An urban farming project in London produces fresh food, including fish, eggs and vegetables, all under one roof.

Sewing the seeds of a low carbon future

Arcadia Group has developed a groundbreaking rice seed which incorporates the nitrogen absorbing genes from wheat.

CNN's Road to Rio looks at the most exciting green projects underway in Hong Kong.

A greener playtime for Chinese toys

Kristie Lu Stout goes to a toy factory in Shenzhen, China where an ambitious plan to cut the carbon emissions is underway

Chinese scientist have developed a micro algae that is more effective than trees at absorbing carbon.

"The Waving Wall" is a street art installation that highlights the issue of embedded water -- the hidden quantities of water used to produce the products we buy.

This month, Road to Rio touches down in China. In their first stop, CNN's Kristie Lu Stout and Stan Grant, and the Road to Rio 'Expert' Jie Yu, meet in Hong Kong to explore a range of the city's boldest carbon cutting initiatives.

How did buildings keep cool before the invention of air conditioning? As architects consider how to reduce the energy demands of new builds, some are turning to the past for simple, low-tech solutions.

In the heart of Mumbai's largest slum, rag pickers are turning recycling waste into big business.

The Road to Rio team travel to Delhi, India to look at the city's best green initiatives.

A textile factory in Jaipur, India is using solar energy to address the carbon intensive process of dying colorful silks

Award winning architect Manit Rastogi looks back to his Mughal heritage to create green buildings of the future.

City dwellers will soon be able to make greener travel choices just by looking at their smartphone.

What's the best way of encouraging men to pee more accurately in public urinals? Answer: Give them a target.

Carbon cutting measures are in place all over the UAE, in Abu Dhabi even the police are doing their bit.

Reducing carbon emissions in the UAE

CNN's Road to Rio travels across the UAE to find out how cities are attempting to reduce their carbon emissions.

This month Road to Rio -- a Green City Journey stops off in the world's second most populated country, India. Sara Sidner, Mallika Kapur and Nick Glass meet in the capital city New Delhi, to explore how carbon cuts are being made.

Nick Glass explores the Kyoto Protocol from its source at the 1992 'Earth Summit' in Rio.

'Green Sheikh' looks to the future

Nuclear energy in the UAE

The carbon footprint of water

CNN's Nick Glass looks at the environmental effect of desalinating water in the UAE and green alternatives.

When Tropical Storm Washi ripped through the southern Philippine city of Cagayan de Oro last weekend, it dumped in one day more than the city's entire average rainfall for the month of December.