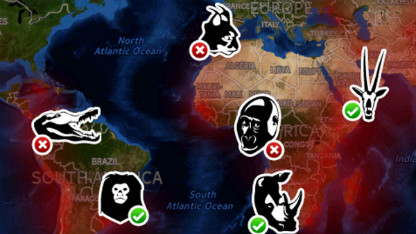 The world's 35 biodiversity hotspots cover less than 3% of the Earth's surface, but contain over 50% of plant species. From plantlife and insects to megafauna, like tigers and crocodiles, many species in these treasure troves of nature are endangered. Around 10,000 species of plants and animals are either endangered or critically endangered, according to the IUCN's latest Red List of Threatened Species; 25% of mammals and 41% of amphibians are threatened. Click on the icons to see the top conservation success stories and most pressing concerns among conservationists