The 2014 Finalists have been announced!!

The 2014 finalists have been announced by Ferial Haffajee, Chair of the independent judging panel.

This year the competition received entries from 38 countries across the continent, including French and Portuguese speaking Africa.

Congratulations to the 28 finalists from 10 countries:

CONGRATULATIONS TO ALL THE WINNERS OF THE 2013 AWARDS! 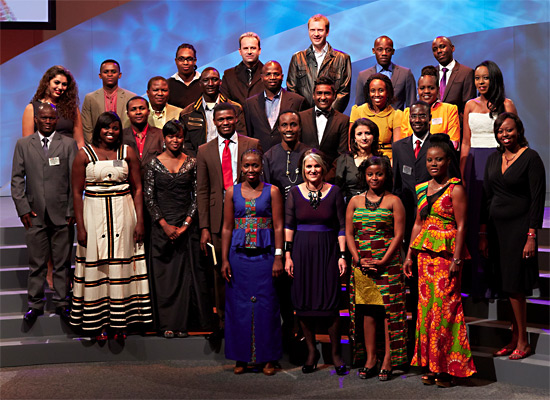 Read about the winners 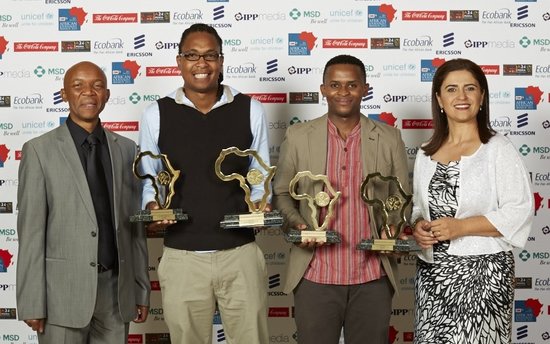 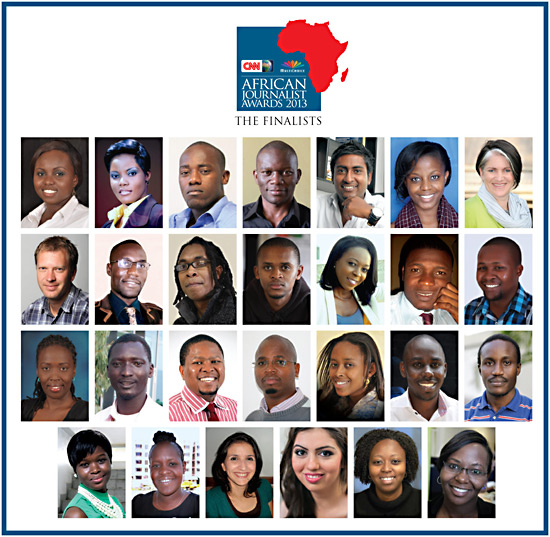 Meet the finalists of the 2013 competition here

The 2013 finalists have been announced!

Congratulations to the finalists in the prestigious CNN MultiChoice African Journalist 2013 Competition. There are 27 finalists from 11 countries across the continent:

Watch all the highlights from the Awards Ceremony held in Lusaka, Zambia on Saturday 21st July including all the winners' announcements, their reactions and thank you speeches.

THE 2012 WINNERS HAVE BEEN ANNOUNCED! Click here to see judges comments of winners of all categories. 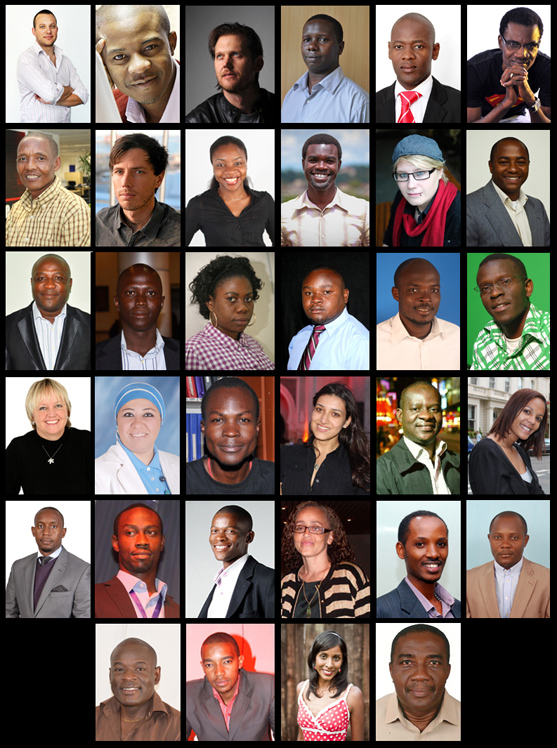 Meet the finalists of the 2012 competition.

Fatuma Noor from Kenya has been awarded the top prize at this year's CNN MultiChoice African Journalist 2011 Awards Ceremony.

Fatuma Noor, who works for The Star Kenya, won for her investigative three-part series on the 'Al-Shabaab', which was chosen from among 1407 entries from 42 nations across the African continent.

The series tells the story of the young men who give up their freedom abroad to return and fight for the 'Al-Shabaab' in one of the world's most dangerous places on earth -- Somalia.

Fatuma Noor was one of the 27 finalists at the Awards ceremony on Saturday evening and was a winner in the category 'General News Award (Print).'

READ MORE: IN ENGLISH | IN FRENCH | IN PORTUGUESE | GALLERY

"Doing Business in Africa: How to Succeed"- A panel discussion

On the morning of the awards, Saturday 25th June, a panel discussion took place on how influential companies in Africa succeed in doing business on the continent.

Moderated by Isha Sesay, host and reporter for CNN International's 'Inside Africa' (far left), the panellists from left to right were:

Here are some highlights from the panel discussion:

- Isha Sesay introduces the members of the panel on "Doing Business in Africa: How to Succeed".
- William Asiko explains the Coca-Cola business across the African continent and its "local face".
- Christian de Faria attributes the success of the MTN group in Africa to the fact that the company works with a local understanding.
- Sebastian Ashong-Katai says that in order to succeed in Africa, businesses must have a good understanding of themselves and decide where they want to focus in Africa.
- Deborah Rayner highlights the importance of CNN International's editorial independence to the channel's commercial relationships.
- William Asiko says that fair and accurate journalism in Africa is critical to his business.
- William Asiko talks about the difference between the distribution of Coca-Cola and medicine in Africa.

MESSAGE FROM ISHA SESAY BEFORE THIS WEEKS AWARDS IN JOHANNESBURG 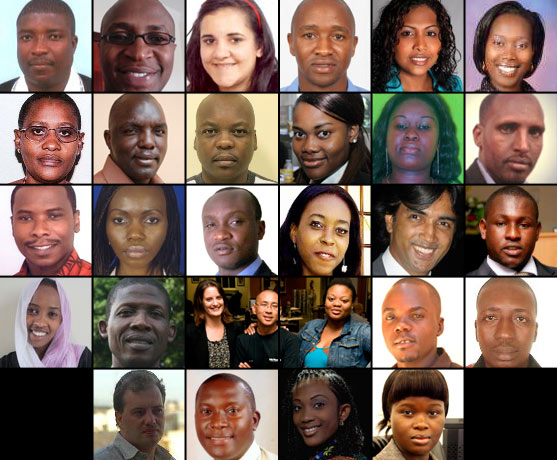 Meet the finalists and find out more about the people behind Africa's most compelling journalistic stories!

Read the biographies of this year's finalists

Finalists in the prestigious CNN MultiChoice African Journalist 2011 Competition were announced today by Joel Kibazo, Chair of the independent judging panel. The competition is now in its 16th year.

This year the competition received entries from 42 countries across the continent, including French and Portuguese speaking Africa.

There are 27 finalists from 13 countries. 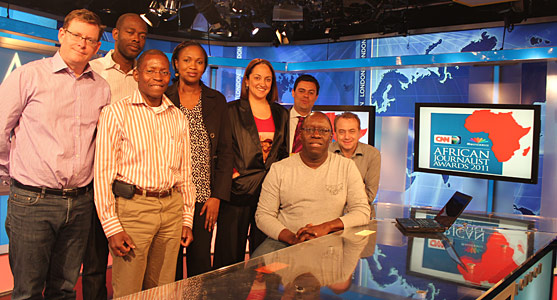 In April, the panel of eight judges returned to CNN headquarters in London to choose the finalists for the CNN MultiChoice African Journalist Awards 2011.

There were a large number of entries to get through - 1407 entries from 42 African Countries.

The journalists selected by the judges will be brought to Johannesburg, South Africa in June, where they will enjoy a five day programme of workshops, media debates and networking with media from across the Continent. The Awards will be announced at a gala ceremony on 25 June.

The judging panel for this year's awards is:

CNN sports anchor Pedro Pinto stepped in to help us with the judging of the Portuguese category.

The panel of judges are pictured in the CNN studio. 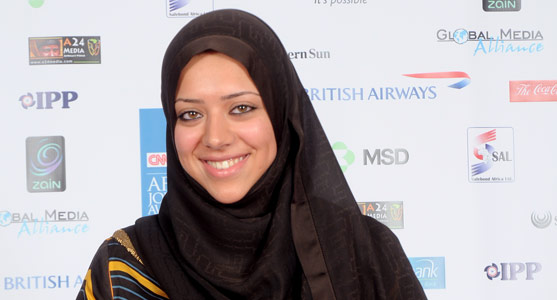 Egyptian journalist, Ethar El-Katatney, winner of the 2009 Economics and Business Award, tells us how the Award changed her career. Enter today and you too can have a career changing experience, closing date is Jan 27th.

I just wanted to let you know how much of a difference the award has made in my life. Seriously. It has given me so much credibility and standing as a journalist, in Egypt and outside. It's gotten me a billboard on the highway with my photo, a news slot on national TV, and so many invitations to speak in so many countries around the world--from Kuwait to Japan! I've been featured in dozens of print articles and TV reports, I've given dozens of lectures on journalism, and I've been able to get so much further in so many places based on the fact that I've received this award.

I believe that the African awards are honestly brilliant for African journalists, and I hope that they continue to go on for a very long time. We need them, and they make a tremendous difference in our lives.

CNN International and MultiChoice this week officially launched the CNN MultiChoice African Journalist 2011 Awards. The winners of these prestigious annual Awards will be announced at a gala ceremony to be held in Johannesburg, South Africa in June 2011.

Tony Maddox, Executive Vice President and Managing Director of CNN International, said: "The CNN MultiChoice African Journalist Awards have been encouraging excellence in journalism across the continent for 16 years and are truly a highlight in CNN's editorial calendar. I'm delighted that they continue to grow in stature and prestige, and it's a humbling experience each year to see and experience such dedication, passion and talent. 2011 promises to be another year of stellar African journalism."

Collins Khumalo, President MultiChoice Africa, said: "MultiChoice Africa is delighted to once again participate in Africa's largest and most coveted journalism awards. Each year we are proud of the talent showcased at the awards and excited about the great progress made in African journalists telling the African story. We believe as an African company that our participation makes a significant contribution towards the development of media in Africa."

Sam Rogers, from e.tv South Africa, was awarded the top prize at the CNN MultiChoice African Journalist 2010 Awards ceremony. Sam, won for 'The Curse of the Nobody People', which was chosen from among 2074 entries from 44 nations across the African continent.

Sam said: "Winning the CNN MultiChoice African Journalist of the Year was possibly the highlight of my career. What an honour to be chosen a winner among so many brilliant African journalists, to be listed alongside the very best who have won this prestigious accolade over the years. What a wonderful platform the CNN MultiChoice award is. It has allowed us to broadcast to a wider audience, to highlight the plight of persecuted Tanzanian albinos and has begun changing perceptions in that region. Their voices were finally heard. "

Over the past 16 years, the competition has grown in size and status to become Africa's most prestigious media event. In 2010, a 'Highlights Programme' of the ceremony, held in Kampala, Uganda, was broadcast in 47 African countries, on the Africa Channel in the US, UK and the Caribbean, OBE TV and RTP Africa.

This year, the competition will recognise excellence in the following categories:

From these category winners, the judges choose the overall winner - The CNN MultiChoice African Journalist 2011.

Finalists in the 2011 competition will participate in a four day finalists' programme that will include a media forum and networking opportunities with senior journalists, editors, business leaders and media owners from across the continent, culminating in a gala awards ceremony in June, 2011. All finalists receive a cash prize and each category winner also receives a laptop and printer. The CNN MultiChoice African Journalist 2011 will receive an additional cash prize and a trip to CNN Center in Atlanta.

The competition is open to African nationals who are professional journalists including freelancers across print, television, internet, photographic and radio. Full details on how to enter can be found by logging on at www.cnn.com/africanawards. The closing date for entries is 27 January 2011. There will NOT be any extensions of this closing date, and entries received after this date may be disqualified. The judging will take place in April, 2011. All entries should be broadcast or published during January 2010 - December 2010. www.cnn.com/africanawards 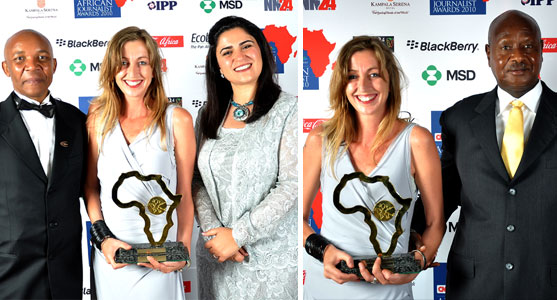 Winners in the CNN MultiChoice African Journalist Awards 2010 were announced at a Gala ceremony hosted by CNN and MultiChoice at the Serena Kampala Hotel, Kampala, Uganda on Saturday 29th May. Read more | Winners gallery

The 2009 CNN MultiChoice African Journalist Award Winner, John-Allan Namu, has just returned to Kenya following his 3-weeks in Atlanta, where he participated in the CNN Journalism Fellowship as part of his prize. Read all about his experience here.