This debate was streamed live. You can watch CNN anytime you want on CNN.com and the CNN Apps for iPhone® and iPad®.

How the four debates shaped the 2012 presidential race, and what may happen next 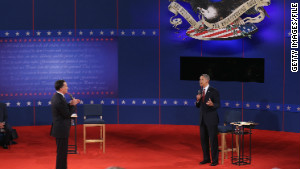 Mitt Romney waited until the presidential debates in the final five weeks of the election campaign to make his long-anticipated shift to the political center after previously espousing strongly conservative stances to win the Republican nomination.

The move appeared to catch President Barack Obama by surprise at their first face-to-face match up. His lackluster performance against a strong showing by Romney helped the former Massachusetts governor to catch, and in some places, pass the president in the polls.

The roller-coaster ride of the 2012 campaign has been particularly volatile because of the more than two dozen debates dating back to last year, including three presidential showdowns...

Thanks for a great conversation.

During this debate, we pulled the most insightful and interesting comments into the live blog alongside Wolf, Anderson and the rest of the CNN Politics team. Commenting on this live blog is now closed, but we still want to hear your voice. Comment via iReport »

Candidate Side by Side