You can’t revisit the past, but thanks to modern photography, you can try to recreate it. Just ask Lisa Werner.

Back in the 1980s, Werner was a student at a German language school, and photographed her travels across Europe. Fast forward to 2017, and Werner returned to the Rhine River region – exactly 30 years later. The photographer decided to recreate some of her favorite snapshots from back in the day.

“I thought it would be a fun photography project for my YouTube channel,” Werner tells CNN Travel. “I was amazed at how little these places had changed.”

Before she left, Werner fished out her old photo albums and scanned 13 favorite images. Once in Europe, she successfully tracked down the exact locations and mimicked her pose from 30 years previously – creating new versions of her favorites. Werner has showcased the then-and-now photographs on her YouTube channel - Cave Art Gal, and blog. 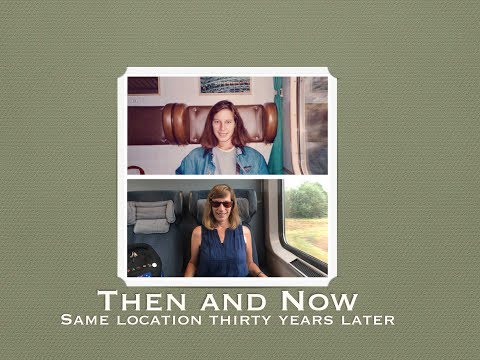 The images document her travels from Strasbourg, France, to Amsterdam in the Netherlands. The family trip was a stroll down memory lane for Werner.

“I easily remembered exactly where all the locations were,” the photographer says. “I wish I had scanned more than only 13 old photographs.”

The tree in the backdrop of this Strasbourg image has grown from sapling to full height.
Courtesy Lisa Werner Photography

Werner’s images are remarkable for how little the backdrops have changed. Her photos include flower-strewn bridges and cathedrals in France; the winding Snakes Way in Heidelberg, Germany and modern art in Mainz, Germany.

These gorgeous European city centers remain intact – seemingly unaltered for hundreds of years. The only differences tend to be foliage – some of which has been planted or grown significantly since the 1980s.

How we document vacations has changed. "People have commented that nowadays we take selfies but back then we were placing ourselves within the locations featuring the places more," Werner says.
Courtesy Lisa Werner Photography

It’s camera and photography habits – not locations – that have changed since 1987.

“It was the camera capabilities that improved,” says Werner. “Back then it was film camera, now it’s an iPhone.

“We spent about one to two minutes taking a quick photo with my iPhone and then moved on to catch up with my brother and his daughter,” Werner says. Werner’s pictures also mark a change from the arm’s-length social media snaps popular today.

“People have commented that nowadays we take selfies but back then we were placing ourselves within the locations, featuring the places more,” she says.

Something to write home about: Vintage postcards on Twitter

From Europe to Australia

Werner asked other tourists to recreate the photographs with her -- as in this picture in Heidelberg, Germany.
Courtesy Lisa Werner Photography

In Werner’s images, past and present, the locations take center stage. As a photographer who contributes to global agency Getty, Werner is used to showcasing landscapes.

Her passion is photographing cave art.

“I have always been obsessed with photographing ancient cave paintings,” she says. “I started with finding all of the Chumash Native American sites in the mountains behind Santa Barbara, California. Then I expanded to across America, to Mexico […] Last year I photographed aboriginal cave paintings in the Australian Outback.”

The next thirty years

Werner will always have a soft spot for Europe, however – especially now she has a whole new set of memories and photographs to treasure. Plus she plans to return and recreate her images once again, 30 years from now.