(CNN) -- His name is synonymous with cinema. Egyptian actor Omar Sharif started his celebrated career in 1953 in the Egyptian-made film "The Blazing Sun". He made the move to the international screen in 1962 as Sharif Ali in "Lawrence of Arabia", a role which earned him an Oscar nomination for Best Supporting Actor. 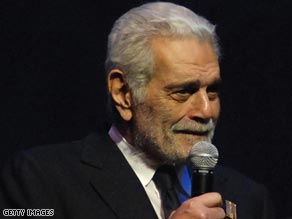 A Golden Globe award for Best Actor soon followed for his starring role in "Doctor Zhivago". At the age of 75, Omar Sharif is still making films. His latest, prehistoric epic "10,000 BC", opens worldwide in March.

After more than 50 years in the film industry, MME's Schams Elwazer (SE)asked Omar Sharif whether anything had changed.

Omar Sharif (OS): I think that film making has changed all over the world -- not only in the Middle East -- because the films reflect the society that we live in. The society has become more violent, there are more people living in the world, and people are having a hard time making a living, and also the audience of the films has become much younger. The old people don't go to the cinema anymore.

SE: Some Hollywood films have recently come to the region to film here and also have begun to base some of their plots in the Middle East. How does Hollywood view the region as a place to do business?

• Converted to Islam & changed named to Omar al-Sharif in 1955

• Nominated for an Oscar for Best Supporting Actor, "Lawrence of Arabia" (1962)

• One of the world's best contract bridge players

OS: It's a question of cost. It costs less to make films in the Middle East, for instance now Morocco has got a big studio in a place called Warzazat which I have made already 2 or 3 films there. They have everything, they have every facility. Tunis has already got a beautiful studio in Hammamet in which I made a film recently. They built a whole of ancient Rome there and you can go there and shoot films about ancient Rome without having to build a set or anything.

SE: How would you characterize the health of the homegrown film industry in the region?

SE: You are the honorary President of the Cairo Film Festival which has recently wrapped up. Cairo Film Festival was the first and is the oldest in the region. But now we are seeing them pop up all over the place, from Dubai to Marrakech. What do you make of this trend?

OS: You know every country wants a bit of publicity. You get people to come and it will encourage tourism. You know we do this for various reasons, we don't do it just for the art of cinema.

SE: We are seeing a new emergence of arts and culture, or attempts at investing in arts and culture in the Middle East. Specifically in the Gulf countries such as Dubai, such as Abu Dhabi, such as Qatar. They're bringing in educational institutions like the Louvre, museums like the Guggenheim. How do you see these investments as benefiting the film industry in the future?

What films get the big prize at all the festivals? Do you know what Iranian films, Japanese films, Chinese films have? The most countries that have had the most prizes in the big festivals in Cannes in Venice, in everywhere, have been Chinese or Japanese or Indian or something. They are not American films anymore. Where do you see an American film getting a prize in Cannes film festival or the Venice film festival. I haven't seen one for ages now.

Have your say. Email us at mme@cnn.com, or send an i-report. E-mail to a friend