HONG KONG, China (CNN) -- People often ask me just how scary it is talking to "millions of viewers" all over the world. 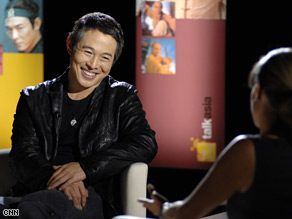 My answer is, not scary in the least! From where I'm sitting, I'm talking to an inanimate camera lens with one guy standing behind it.

That was just one of the reasons why our first-ever Talk Asia shot in front of a live studio audience of about a hundred people was such an experience -- an exciting, nerve-wracking, stressful, extremely entertaining experience.

When my guest, Jet Li, walked on stage, he was an electrifying presence, yet he instantly put everyone at ease.

During the hour-long interview, he answered everything from questions on growing up in extreme poverty to becoming a kung fu superstar and what it's like to knock Mel Gibson's block off.

Jet even opened up about his one-time manager, who was murdered by the Hong Kong triads.

No topic was off limits, but what took me most by surprise was how funny he is. The audience and I were in stitches! But it was only when I overheard someone after the show say, "I cannot believe that was an hour! It felt like five minutes!" that I realized what a success the evening had been.

Bring on the next one, I say!

All About Jet Li