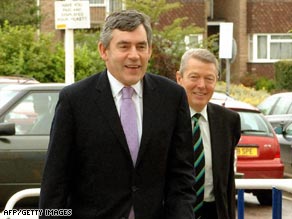 Gordon Brown has lined up "a new government with new priorities."

Alistair Darling, a longterm political ally of Brown and formerly in charge of transport, was named to the key position of Chancellor of the Exchequer -- the finance role previously held by the new prime minister himself for 10 years.

Former environment minister David Miliband replaced Margaret Beckett as foreign secretary, becoming at 41 the youngest politician since the 1970s to hold one of the UK government's four senior cabinet posts.

"I am tremendously honored," said Miliband, a rising star within Labour ranks who had been tipped as a possible challenger to Brown for the party's leadership.

"The opportunities and challenges of the modern world require, in my view, a diplomacy that is patient as well as purposeful, which listens as well as leads," he told reporters.

Despite speculation that Brown would look beyond Labour ranks in building his cabinet, the only non-party appointment saw the former United Nations deputy secretary-general Mark Malloch Brown accept the job of minister for Africa, Asia and the U.N.

Marking the UK government's first change of leadership in a decade, Brown promised "a new government with new priorities" as he addressed reporters outside Downing Street after taking over from Tony Blair on Wednesday.

"I will build a government that uses all the talents. I will invite men and women of good will to contribute their energies in a new spirit of public service."

Brown faces the task of re-building faith in a Labour administration which has seen its achievements -- including three straight general election victories, peace to Northern Ireland and a sustained economic boom -- tarnished by the Iraq war, the cash-for-honors row and the Blair government's perceived preoccupation with media spin.

Blair was questioned by police for a third time in their investigation of allegations that honors were offered for political contributions, the UK's Press Association reported Thursday. (Full story)

In other developments on Thursday, Brown split the Department of Education into two cabinet posts, separating responsibility for schools and children from a new Department for Innovation, Universities and Skills.

"He is a very serious, committed politician very much driven by the values that he learnt from his Presbyterian minister father. We're going to see a lot less glitz and glamour," said Oakley.

"It will be very much a more 'get on the with the job' style of government," said Oakley. "There will be a lot of serious purpose." E-mail to a friend