In Iraq's Shiite south, warlords slug it out for turf

(CNN) -- The fight between U.S.-led forces and militants in and near Baghdad and the sectarian civil war raging in the capital has overshadowed another grim wartime reality -- the factional strife in Iraq's southern Shiite heartland. 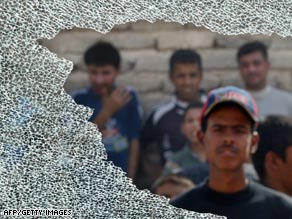 Iraqis look at a car windshield shattered Friday in Karbala in clashes between a militia and U.S. and Iraqi forces.

Experts who study the region attribute the instability to turf battles among "warlords" and their fighters in an unstable political and social environment that is coming to resemble a failed state.

"Iraqi politicians are progressively turning into warlords," Peter Harling, senior analyst with the Middle East Program of the Brussels, Belgium-based International Crisis Group. What has been unfolding in the south, he says, is a "very crude struggle over power and resources."

"Violence has become the routine means of interacting with the local population," Harling says of the militias, which have filled the power vacuum after the fall of Saddam Hussein.

"They see no interest in seeing a functional state emerge."

The south has always been relatively quiet compared with the mixed Baghdad and Diyala provinces and the largely Sunni Anbar province, where Sunni militants conducting large-scale terror attacks have emerged as the major foe of the United States.

But fighting has erupted between Shiite political factions in the southern cities of Basra, Diwaniya, Karbala, Nasiriya and Samawa in recent months, and U.S., British and other coalition forces have conducted raids on insurgents in those regions.

Coalition forces as well have taken on militias. At least 17 people were killed Friday when U.S. and Iraqi forces battled "rogue" Shiite militia members in Karbala after a raid, officials said.

The major movements in the south are the Sadrists; the Supreme Islamic Council in Iraq, the longtime Shiite group led by Iraqi politician Abdul Aziz al-Hakim; the Dawa Islamic Party, led by Prime Minister Nuri al-Maliki; and the Fadhila Party, which holds great power in Basra.

And there are fighters, such as al-Sadr's Mehdi Army militia, aligned with such groups. There are splinter and rogue elements among these groups, and there are smaller entities as well.

This factionalism goes against the notion that Shiite communities are united, says Jon B. Alterman, director and senior fellow of the Washington-based Center for Strategic and International Studies' Middle East Program.

"They are unified when confronted with Sunni or Kurdish power, but within the Shia community there are a variety of parties, with a range of different leaderships, all competing for power and influence."

Alterman says he sees the emergence of "warlords" who "are staking out their claims to different parts of Iraq."

The government is dominated by the Shiite-led United Iraqi Alliance, which includes the Dawa, the Sadrists and the SICI. Fadhila is represented in parliament by a separate political movement.

But on the ground, Alterman says, "the central government is not central to how politics works anymore. What matters are guns and money and access to resources."

The Sadrists and SICI (formerly SCIRI, once called the Supreme Council for the Islamic Revolution in Iraq) both have charismatic leaders tied to esteemed old families, Alterman says, with SICI as an old elite family with a senior leadership, and al-Sadr a young upstart "with street credibility and impressive ground operations."

"My friends in Iraq tell me that when it comes to actually getting guys in the streets, the Sadrist network is probably the most robust of all of them," Alterman says.

Grand Ayatollah Ali al-Sistani has been influential among Shiites, but he is limited in the bread-and-butter sense, Alterman says. He "doesn't have a day-to-day organization that can get things done."

"In a place bereft of services and security, people look to a leadership that can protect them and feed them," Alterman says.

Around 60 percent of Iraqis are Shiites but were oppressed under a Hussein regime dominated by Sunni Arabs. Also, the shadow of Iranian influence looms throughout the south, where there are many links between Iraqi Shiites and their Shiite neighbor.

Christopher Pang, head of the Middle East & North Africa program at the British-based Royal United Services Institute for Defense and Security Studies, says the Shiites regarded the post-Hussein era as their time to seize the historical day. But that dream has been elusive.

Pang calls the environment the "militarization of local politics."

Shiites are divided by "competing ideological agendas," he adds.

"Most importantly, we are seeing a fundamental divide," pointing to "competing divisions over how Iraq should appear in the future," particularly regarding its federal shape, Pang says.

These views reflect the groups' historical power bases, with the SICI claiming support throughout the south and Fadhila in Basra. Any autonomous region with Basra would be rich in oil wealth, and it has the only seaport in Iraq, making autonomy very attractive.

Sunnis have opposed autonomous regions, saying their area lacks the oil wealth in the Kurdish north and the Shiite south.

The Shiite Sadrists share the same position, however. One reason is because the Sadrist political power base is in Baghdad, the center of the country where natural energy resources are lacking.

The Mehdi Army is popular in the densely populated Shiite slum in the city's northeast.

Wherever it is based, the Sadrist movement is politically and socially savvy, providing social services and funding and backing for religious entities.

These networks and their "anti-coalition sentiments" serve to generate support. Al-Sadr has earned himself "a place in the religious minds of the Shiites in the south."

"If you want to succeed, you have to win the hearts and minds of the people," Pang says. E-mail to a friend