The True Story of Carlos Ghosn 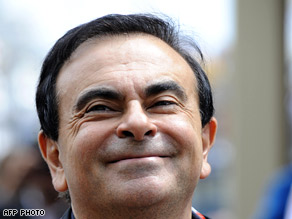 Renault-Nissan CEO Carlos Ghosn smiles at the Monaco Formula One Grand Prix on May 25, 2008.

Brazilian-born Ghosn has not always been a superstar in Japan. When he arrived in Tokyo in 1999 to revive the fortunes of Nissan, he took plenty of flak after slashing more than 20,000 jobs and closing assembly plants.

But when his "Nissan Revival Plan" worked -- he resurrected the car maker from near bankruptcy a year earlier than scheduled -- he became a hero.

These days Ghosn gets the sort of adulation in Japan normally reserved for rock stars and football players. He is often mobbed by fans in search of an autograph and has even been portrayed as a manga comic book superhero in "The True Story of Carlos Ghosn."

His face has graced the covers of Japanese business magazines, he is the subject of a handful of books and has even written his own.

Ghosn was born on March 9, 1954, to Lebanese parents. His family moved to Lebanon when he was a toddler, and he later studied engineering at Ecole Polytechnique and Ecole des Mines de Paris in France, where he is a citizen.

Fluent in French, Arabic, English and Portuguese -- and quickly catching up in Japanese -- Ghosn is the quintessential international businessman.

His career in the auto industry began in 1978 at Europe's largest tiremaker, Michelin, where he worked for 18 years, moving up the ranks from plant manager to chief operating officer.

He headed both Michelin's South American and North American units during his tenure with the company, achieving success at both. He joined Renault in 1996 as executive vice president, and was sent to Japan to revive Nissan three years later.

Since May 2005, all the while staying at the helm of Nissan, he has taken the reins of French car company Renault, which owns 44 percent of Nissan.

The man dubbed "Samurai" and "Le Cost Killer" for his reputation for restructuring companies is not only CEO and president of Nissan and Renault, he is also on the board of Alcoa, Sony and IBM.

Running two of the world's biggest car companies means splitting his time between Paris and Tokyo and fitting in meetings, visits to plants and dealerships, as well as attending car shows all over the world and catalyzing spectacular model launches.

But despite his busy lifestyle, it is not all business for Ghosn. Married to wife Rita, whom he met 22 years ago in France, the couple have four children -- Caroline, Nadine, Maya and Anthony -- and Ghosn is known for making time to spend with his family.

And at Nissan's new Advanced Technology Center in Yokohama, Japan, all employees are asked to leave the building each day no later than 8 p.m., so as to avoid sombering into workaholism.

He's revived the fortunes of Japan's second biggest car maker, was named Man of the Year in 2002 by French magazine Le Journal de l'Automobile and Businessman of the Year by Fortune magazine the same year.

But he has said his most cherished titled is being named Father of the Year by a Japanese community group in 2001.