(CNN) -- It appears that Kevin Bacon was one degree too close to Bernie Madoff. 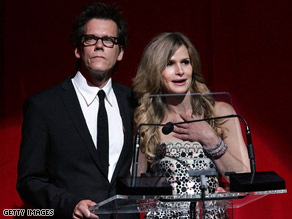 Bacon, the prolific actor, and his wife, fellow screen star Kyra Sedgwick, had investments with Madoff, the financial guru accused of swindling his clients out of $50 billion in a massive Ponzi scheme, Bacon's publicist told CNN Tuesday.

Publicist Allen Eichhorn did not say how much the couple lost, declining to address reports that the figure was in the millions.

"Let's not speculate," he said.

Dreamworks Animation CEO Jeffrey Katzenberg and a charity run by director Steven Speilberg mark some of the other Hollywood heavyweights allegedly bilked by Madoff, who remains in his Manhattan home on house arrest after posting $10 million bail.

Bacon, whose credits include "Mystic River," "Footloose" and the recent political biopic "Frost/Nixon," has appeared in 64 movies or television programs since 1978, according to the Internet Movie Database.

It's a career that spawned the parlor game "Six Degrees of Kevin Bacon," in which players attempt to link any other actor to Bacon based on the massive number of co-stars with whom he has worked.

Sedgwick stars in TNT's "The Closer," and has screen credits that include "Singles" and "Born on the Fourth of July." TNT is a unit of Time Warner, CNN's parent company.

Madoff was charged earlier this month with securities fraud in a scandal that has shaken financial communities around the globe.

He is accused of running the $50 billion Ponzi scheme from his investment advisory business -- a scam that could result in huge losses to financial firms, charities and individual investors worldwide.

All About Bernard Madoff • Kevin Bacon