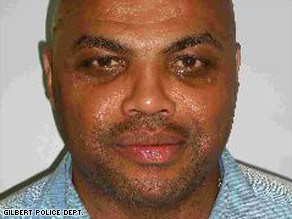 Charles Barkley was driving an Infiniti SUV through a trendy area of Scottsdale on Wednesday, police say.

Barkley issued a brief statement, saying, "I am disappointed that I put myself in that situation. The Scottsdale police were fantastic. I will not comment any further as it is a legal matter."

Lt. Eric Shuhandler of the Gilbert Police Department said an officer pulled Barkley over after he ran a stop sign in Scottsdale's Old Town area, a trendy spot known for its nightclubs and bars. Gilbert and Scottsdale are in the Phoenix metro area.

"The officer identified the driver of the 2005 Infiniti as Charles Barkley," according to a written statement from police. "Mr. Barkley was administered the standard field sobriety tests after the odor of intoxicating liquor was detected."

At a news conference later in the day, Shuhandler said Barkley's "performance on the field sobriety test revealed there was probable cause to make an arrest."

"When he arrived at the station, police administered a blood test, which is customary of our police department to do," he said, adding that Barkley consented to the blood test.

It will take "a few days" for the crime lab to test the blood sample and determine Barkley's blood-alcohol level, Shuhandler said.

The former NBA power forward was cited for driving while impaired and released.

"It was a pretty routine arrest," Shuhandler said.

Shuhandler said Barkley behaved professionally during the booking and was "very respectful and cordial with our officers."

Barkley, 45, is a commentator for TNT's coverage of the NBA.

In October, he told CNN's Campbell Brown that he plans to run for governor of his home state of Alabama in 2014, saying, "I can't screw up Alabama. We are number 48 in everything and Arkansas and Mississippi aren't going anywhere."

Although he is well known for entertaining comments and a cocky attitude, he also compiled an impressive résumé as a professional basketball player.

His commanding performance on the court earned him the nicknames "Sir Charles" and the "Round Mound of Rebound."

Barkley was drafted out of Auburn University in 1984 by the Philadelphia 76ers and played 16 seasons with the Sixers, Phoenix Suns and Houston Rockets before he was permanently sidelined in 1999 with a ruptured tendon in his left knee.

TNT is owned by Turner Broadcasting Corp., also the parent company of CNN.

All About Drunk Driving • Charles Barkley