LONDON, England (CNN) -- One million free text messages will be sent every day for 12 months from Monday in South Africa in a bid to raise HIV awareness and encourage testing for the disease. 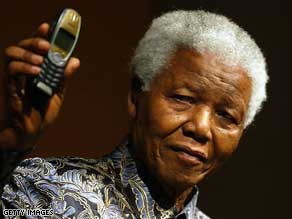 The ambitious Project Masiluleke is being rolled out across the country after a pilot period that saw calls to a AIDS national helpline shoot up by 200 percent, organizers say.

The United Nations estimates that there are currently six million people living with HIV in South Africa and just one in 10 get the treatment they need.

"South Africa is the epicenter of the global HIV epidemic," said HIV activist Zinny Thabethe in Octorber at an annual conference for the social innovation network Pop!Tech, an organization instrumental in developing the concept.

'Project Masiluleke,' or 'Project M' was set up to try to encourage people to seek testing and treatment in a country where cell phones are abundant.

Read more about the show »

Africa is cited as the fastest growing mobile-phone network in the world. In South Africa, more than 80 percent of the population has one -- the country has a population of 49 million, and it is estimated that 43 million have cell phones. Almost 95 percent of the phones are prepaid.

The initiative plans to broadcast millions of health messages every month to phones across South Africa.

"This is the largest ever use of cell phones for health information," said Gustav Praekelt, one of the project's originators.

"There is near universal coverage," said Praekelt during the launch of the project. "And in the absence of other services, the mobile phone has become the central component for people to get access to information."

Organizers say 'Project M' will offer South Africans the privacy to get tested and pursue treatment options and counseling by staff who are HIV positive themselves.

The system sends the messages using a so-called "Please Call Me" (PCM) service. This free form of text messaging, common across Africa, allows someone without any phone credit to send a text to a friend asking them to call.

Each sent PCM message has the words "Please Call Me," the phone number of the caller, and space for an additional 120 characters. The extra space is normally filled with advertising, which helps offset the cost of running the service.

The message reads: "Frequently sick, tired, losing weight and scared that you might be HIV positive? Please call AIDS Helpline 0800012322."

Encouraging people to get tested is a huge challenge in a country where people with the AIDS virus still face stigma and shame.

However, 'Project M' appears to be having an impact, since it was initiated in October.

"We have observed a dramatic increase in the call rate to the AIDS Helpline -- from approximately 1,300 calls per day to a new average of 3,600," said Milo Zama, Projects Development Manager for LifeLine, one of the partners.

Many of the messages are broadcast in English and in local languages such as Zulu.

As well as Pop!Tech, the project has been developed and funded by HIV charities and technology and design firms, including Nokia Siemens, MTN, the Praekelt Foundation, iTeach and National Geographic.

Pop!Tech's Director of Communications Jason Rzepka told CNN there are plans to expand the project to other affected countries after its official launch in February 2009.

He said: "One of the objectives of the February launch event will be to secure additional funding, so we can continue to expand Project Masiluleke into its planned 2nd and 3rd phases beyond South Africa."