Cholesterol has long been seen as the key culprit in cardiovascular disease. But nearly half of all heart attacks occur in people with normal cholesterol levels, which suggests that another factor is at work. 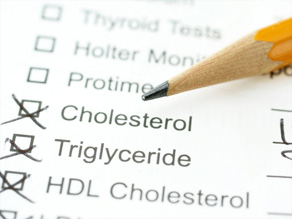 Researchers have identified cholesterol's partner in crime as inflammation -- the flood of white blood cells and chemicals that our immune system unleashes to ward off damage or infection.

Cholesterol wouldn't be nearly as dangerous without this process, which is thought to play an essential role in atherosclerosis, the hardening that occurs when low-density lipoprotein (LDL), also known as bad cholesterol, builds up in the arteries.

When high levels of cholesterol occur in the bloodstream, excess LDL begins to seep into the inner wall of the artery. This triggers an inflammatory response, which actually speeds up the accumulation of cholesterol in the artery wall. This in turn produces more inflammation -- and on and on. Eventually the deposited cholesterol hardens into a plaque, which can rupture and lead to the blood clots that cause heart attacks and strokes -- an event that inflammation also appears to help along.Health.com: 7 causes of high cholesterol

Some experts now believe that inflammation is the link between the many diseases and conditions that affect the heart and brain.

"Inflammation is the common denominator in nearly all of the diseases we deal with," says James O'Keefe, MD, director of preventive cardiology at the Mid America Heart Institute in Kansas City, Missouri. "Heart disease, diabetes, dementia -- they're all tied to inappropriate, low-grade, chronic inflammation."

Our growing understanding of inflammation's role in atherosclerosis doesn't diminish the importance of cholesterol -- you still have to keep that "bad" number down and the "good" number up -- but it does present another way to anticipate cardiovascular disease.

Studies show that a substance known as C-reactive protein (CRP), one of the so-called markers released by cells during the inflammation process, may be more effective than cholesterol in gauging the risk of heart attack and other cardiovascular events.

A landmark 2002 study conducted by a team of Harvard researchers and published in the New England Journal of Medicine found that women with the highest levels of CRP were nearly 2.5 times more likely to experience a first cardiovascular event (including heart attack and stroke) than those with the lowest levels of CRP. As a predictor of risk this was 40 percent more effective than LDL cholesterol, which, in the corresponding groups of women, produced an increased risk only 1.5 times greater.

These results got everybody's attention. A CRP test specifically designed to measure the risk for cardiovascular disease, known as a high-sensitivity C-reactive protein assay (hsCRP), was approved by the FDA in 1999, and the test has become nearly as routine as the cholesterol test. Some doctors have even begun to administer the test, which requires a simple blood workup, as part of their annual physical exams.

The importance of CRP is still a matter of dispute, however.

"One of the issues and controversies regarding CRP as a risk factor for cardiovascular disease has been whether it is simply a marker, or whether the higher levels actually cause heart attack and stroke," says Alex Reiner, MD, an epidemiologist at the University of Washington School of Public Health and Community Medicine.

There's some evidence for both explanations, and according to Dr. Reiner, "It's very difficult to tease that out. It can work both ways, and my guess is, it probably does."

Dr. Reiner is one of a group of researchers across the United States who has turned to genes to establish a link between inflammatory markers and the risk of cardiovascular events. Dr. Reiner and others have identified genetic variations that predict CRP levels, and variations that predict heart attack and other events, but they have yet to find a single gene that predicts both, which would prove the connection between CRP and cardiovascular disease.

"That would be the holy grail," says Dr. Reiner.

Though the exact role of inflammatory markers is yet to be determined, if your CRP test uncovers high levels of CRP (defined by the American Heart Association as over 3 mg/L), it is probably a sign that you should address your risk for cardiovascular disease, even if you have normal cholesterol. Health.com: Which statin will lower your cholesterol?

Your doctor may start you on aspirin therapy -- though it's unclear why, aspirin seems to disrupt the link between CRP levels and cardiac events -- or, more likely, a statin.

Recent studies have shown that the statins commonly prescribed for lowering cholesterol may also be effective for lowering CRP levels. In March 2008, a 15,000-person study comparing Crestor (rosuvastatin) against placebo in two groups of outwardly healthy people with low levels of LDL cholesterol and high levels of CRP was stopped early -- a "stunning" outcome, the lead researcher said at the time -- because the reduction in cardiac events was so marked among the participants taking the drug that to continue the trial and deprive the placebo group of the drug's benefits would have been unethical.

But even statins aren't a silver bullet. As with cholesterol, inflammation should be managed through all the steps that you already know about: maintaining a healthy weight, exercising, quitting smoking, and above all, eating healthy. Health.com: 10 best foods for your heart

Inflammation appears to be aggravated by a poor diet. Research shows that high-calorie, high-fat meals cause a sudden spike in CRP and other inflammatory markers because they flood the body with blood glucose and triglycerides.

"The inflammation is due to a fundamental problem of using the wrong fuel for the engine," says Dr. O'Keefe. "We're not designed to burn this stuff, and when we do, it throws off all these inflammatory by-products."

To keep inflammation to a minimum, Dr. O'Keefe recommends a restricted-calorie diet (similar to the Mediterranean diet), consisting of fruits and vegetables, lean protein, nuts, vinegar, tea, and fish oil, as well as low to moderate alcohol intake.

"The key to restoring good health to America is getting people to tune in to the connection between the dynamic, hour-to-hour nature of inflammation and their general health and well-being -- of their heart, their brain, their blood," says Dr. O'Keefe. "From a health standpoint, nothing is more important than keeping those inflammation levels down."

Is inflammation overhyped? Not everyone is convinced that inflammation is the next big thing in cardiac care. The role of inflammation and the value of CRP as a predictor are still very much open to debate, and even supporters of the inflammation theory admit that it is unlikely to become more important than cholesterol.

The connection between cholesterol and cardiovascular disease is by now so well established that inflammatory markers like CRP, while they may prove useful to test and treat, will not take the place of cholesterol any time soon, says Alan Daugherty, PhD, the director of the Cardiovascular Research Center at the University of Kentucky.

"If you gave physicians a choice between doing a test for cholesterol or CRP," he says, "I'm fairly certain that more than 90 percent would take the LDL cholesterol measurement."

Treatment for inflammation, he adds, will continue to take a backseat to cholesterol-based treatments for the foreseeable future.

"I very much doubt it will ever be a substitute for cholesterol-lowering, but it might very well be an add-on," says Daugherty.

All About Diet and Nutrition • Heart Attacks • Cholesterol