How to stop procrastinating on diet, exercise

(OPRAH.com) -- Since the late 1980s, Nike has been telling us, "Just Do It!" If only we simply needed a sneakered kick in the butt. 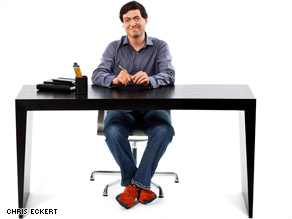 Dan Ariely says people are more likely to attend to work duties than diet or exercise.

"The world is designed to create procrastination problems," says Dan Ariely, Ph.D., James B. Duke professor of behavioral economics at Duke University and the author of "Predictably Irrational."

"Our emotions get the better of us, and we tend to forsake our long-term goals in favor of short-term desires. It's a major source of human misery."

Ariely surveyed almost 3,000 Oprah.com users to explore how procrastination toys with our lives. He found that while people have a general tendency to drag their feet, certain tasks are real "back burners" for pretty much everyone.

Of the 12 activities listed (including chores like holiday shopping, paying bills, and scheduling doctors' appointments), exercising and starting a diet are the two people put off the most, topped only by evaluating their retirement plan.

Work duties like completing assignments and returning voice mails are attended to much more promptly. Even when people express a willingness to deal with their most avoided to-dos by setting deadlines, the data revealed, they are likely not to follow through.

"Just recognizing the problem," says Ariely, "is the first step to overcoming it."

Here are a few more strategies:

"The hero of 'The Odyssey' realized that, left to his own devices, he would succumb to the seduction of the Sirens' song, so he had himself tied to the mast of his ship, limiting his ability to behave badly later," says Ariely.

Try to outsmart the temptation of your short-term desires. Don't go grocery shopping when you're hungry, and ask the waiter not to even show you the dessert menu.

2. Borrow from your own success.

If you're good at handling job demands, translate the same tactics to the areas where you procrastinate. "Work seems more urgent because others are depending on you and there are deadlines to meet," Ariely says. "That's what helps make it a priority." Oprah.com: Five ways to get a life

Invest in a trainer to give your workouts more structure, or arrange to walk regularly with a friend, whom you'll let down if you don't show up.

Celebrity trainer Jim Karas adds that constant reminders of your mission will help keep you from deferring it. Find a photo of yourself when you last felt happy and confident about your appearance, and make it your screen saver.

Put mirrors all over your house and look at yourself constantly, he suggests. "People go around wearing blinders. They don't want to see reality. The more you look at yourself, the more you will want to make a difference -- now."

By Tim Jarvis from "O, The Oprah Magazine," September 2008

All About Exercise and Fitness • Diet and Nutrition