Paul says he's still in the race 'to influence ideas' 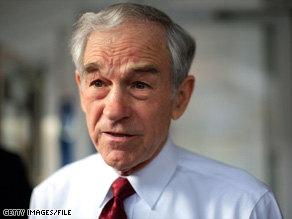 Rep. Ron Paul isn't dropping out of the race even though John McCain is the GOP's presumptive nominee.

His campaign is "certainly winding down" given the number of primaries left, but it's not over, Paul said Monday on CNN's "American Morning."

Two days after Sen. John McCain became the presumptive GOP nominee, Paul hinted in a video posted on YouTube that the end was near.

"Though victory in the conventional political sense is not available in the presidential race, many victories have been achieved due to your hard work and enthusiasm. We must remember, elections are short-term efforts. Revolutions are long-term projects," Paul said in the video.

Paul, who ran for president in 1988 as a Libertarian, shot down the idea of launching a third party or independent candidacy, saying he doesn't think such a move is practical.

Paul said Republicans "have a right to vote for someone that stands for traditional Republican principles" and that he does not plan on supporting McCain.

"I'm not likely to support John McCain unless he changes his views. He doesn't represent anything I've talked about for 30 years," Paul said.

"How could I reject everything I've talked about for 30 years ... and say, 'Oh, OK. Now it's all over. Unity is the most important thing. Now I endorse John McCain.' Nobody would understand that. I certainly would have a difficult time adapting to that."

Paul said Monday he plans to continue campaigning to keep his ideas in the arena.

His campaign has focused on a "limited constitutional government, low taxes, free markets and a return to sound monetary policies," according to his Web site.

His presidential run has been centered around a grass-roots effort. Despite his low polling in the Republican primaries and caucuses, he's had a strong Internet campaign with successful online drives for funds.

"The true revolution on the change of the party as well as the change of the country is ongoing. We feel very good about it, which means I'm still in the race, but certainly in a manner that is less energetic than it was six months ago," he said.

Paul said he feels an obligation to his supporters in the states that have yet to hold their contests.

"I didn't think that it would last that long nor we would energize so many nor raise so much money. So we're really excited about what's going on," he said.

Paul is the sole Republican candidate to call for a U.S. withdrawal from Iraq.

The lawmaker said he didn't think his supporters would be better off voting for the Democratic candidate because he said he doesn't consider either one to be sincere.

"If you look at [Barack] Obama's voting record, he's voted not to end the war. He's voted to finance the war. So his rhetoric is playing to the people that come my way, but he ... he wants to send more troops into Afghanistan. He wants to broaden the military. I think it's a fraud what he's talking about when he wants to really get out of Iraq," he said.

Paul has received 21 delegates so far. He had a notable showing in the Washington state caucuses, where he got 21 percent of the vote. He also received more than 20 percent in the North Dakota and Montana contests.

McCain became the presumptive Republican nominee following the March 5 primaries in Ohio, Texas, Rhode Island and Vermont. The only other candidate left in the GOP race, former Arkansas Gov. Mike Huckabee, dropped out after McCain's wins last week. E-mail to a friend