Bush: No regrets over Iraq invasion

MESEBERG, Germany (CNN) -- U.S. President Bush claimed Wednesday that he had no regrets about the decision to invade Iraq and topple Saddam Hussein in 2003 and reiterated his determination to force Iran to halt its nuclear program. 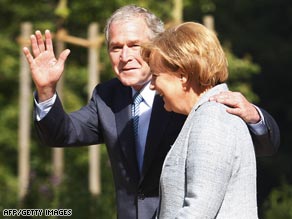 Bush, making the final official visit to Europe of his presidency, spoke at a news conference in Germany after talks with Chancellor Angela Merkel.

He said he had told Merkel that diplomacy remained his preferred choice for dealing with Iran. But he added that "all options are on the table" and said Tehran needed to "verifiably suspend" its uranium enrichment program. Iran maintains that its nuclear ambitions are peaceful.

"The message to the Iranian government is very clear: that there's a better way forward than isolation and that is for you to verifiably suspend your enrichment program and the choice is theirs to make," Bush said.

On Tuesday, the U.S. and the European Union issued a joint declaration urging tougher action against Iran over its nuclear program.

It said the U.S. and EU would implement previously passed Security Council resolutions on Iran and stood "ready to supplement those sanctions with additional measures."

Sanctions in place should be enforced, Bush said, and allies should work together for additional sanctions if Iran "ignores the demands of the free world."

Merkel said further sanctions would follow if Iran failed to meet its commitments. "We again said we want to give room for diplomatic solutions, we want to give diplomacy a chance, but we also have to stay on that particular issue."

She added that she believed diplomatic pressure had already had an impact.

"If you look at the situation in Iran on the ground, you see that quite clearly. These efforts can have a success, but this presupposes, obviously, that the global community is sort of unified," she said.

Merkel said there must be a "common approach" toward Iran in the world community.

Leaving Germany on Wednesday, Bush flew on to Italy, where he was to hold talks with Italian premier Silvio Berlusconi and visit the Vatican to meet Pope Benedict XVI on Friday.

Bush can expect a warm reception from Berlusconi, a staunch U.S. supporter who committed Italian troops to Iraq in the aftermath of the invasion and who returned to power in elections this year.

Paying tribute to Bush in an article for Time magazine's list of the world's 100 most influential people, Berlusconi wrote: "Personally, I will always remember him as a friend." Read the article at Time.com

Asked about Iraq, Bush said that "substantial" progress had been made in helping the country, adding that efforts in Iraq would "change the Middle East for the better."

"Removing Saddam Hussein made the world a safer place," Bush said. But he admitted once again that he regretted the tough rhetoric he had used in the run-up to the conflict which had made it appear he was eager to go to war.

In an interview with UK's Times newspaper Wednesday, Bush said that using phrases such as "dead or alive" and "bring them on" had not created an impression of a man of peace.

He also said he had found it painful "to put youngsters in harm's way," adding that he had an obligation to make sure lives had not been lost in vain.

"One of the lessons of Iraq is that in order for a democracy to develop or for an economy to develop there has to be a measure of security, which is now happening," he said.

Bush said he also believed that the U.S. would develop a bilateral strategic agreement relationship with Iraq, a pact now under negotiation.

He said reports that the United States wanted to develop permanent bases in Iraq were "erroneous."

"I think we'll get the agreement done," he said. "This will not involve permanent bases, nor will it bind any future president to troop levels."