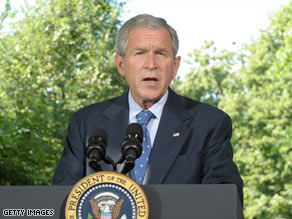 One Republican voted against the measure, which now moves to the Senate.

The deal breaks a four-month impasse between the Bush administration and Congress over whether to protect telecommunication companies that took part in a program that critics say was illegal.

Before the vote, President Bush said Friday that the bill "will help our intelligence professionals learn our enemies' plans for new attacks."

Bush said the legislation will "allow our intelligence professionals to quickly and effectively monitor the plans of terrorists abroad while protecting the liberties of Americans here at home."

"The enemy who attacked us on September 11 is determined to strike this country again," the president said on the Oval Office patio. "It's vital that our intelligence community has the ability to learn who the terrorists are talking to, what they're saying and what they are planning."

In a news conference after the vote, leaders from both parties defended the compromise bill.

House Majority Leader Steny Hoyer, a Maryland Democrat, and Minority Whip Roy Blunt, a Missouri Republican, emphasized that there is no immunity protection for anyone in the government.

Hoyer said the bill, opposed by a majority of his Democratic colleagues, was the best possible deal: "Our alternative was essentially between this compromise bill and the protections we built in, or the Senate bill, which gave immunity outright.

"We can't really change what has happened, but going forward, we would protect and have court oversight of any program that a future administration might undertake," he said.

Blunt argued, "The retroactive protection for communication companies that cooperated with the government when asked to, I believe, is fully there, but the courts get to decide that.

He added, "In my opinion, they will be dismissed because of the evidence standard here."

Both Hoyer and Blunt emphasized the importance of the "exclusivity" provision inserted into the bill that designates the Foreign Intelligence Surveillance Act program as the sole authority for electronic surveillance.

"This is the law for monitoring communications in all cases," Blunt said.

Sen. Russ Feingold, D-Wisconsin, one of the harshest critics of the warrantless wiretapping program, called the proposal "a capitulation."

Rep. Pete Hoekstra of Michigan, the ranking Republican on the House Intelligence Committee, said the intelligence community depends on "the backing of patriotic private companies."

"Those businesses that cooperate are putting their shareholders and employees at stake, and they deserve our support, not multibillion-dollar lawsuits," Hoekstra said.

The letter said the amendments "would provide the intelligence community with the tools it needs to collect the foreign intelligence necessary to secure our nation while protecting the civil liberties of Americans."

They also cited the protections for phone companies who assisted the government.

A temporary law granting immunity to telephone and Internet providers who took part in the program expired in February, when leading Democrats opposed making those protections retroactive.

In 2005, Bush acknowledged that he ordered the National Security Agency to intercept communications between U.S. residents and people overseas suspected of having ties to terrorism. The administration insists that the program was authorized when Congress approved military action against al Qaeda after the terrorist network's 2001 attacks.

But Democrats and some Republicans in Congress said the move violated a 1978 law that required intelligence agencies to get court approval before spying on Americans. The revelations led to several lawsuits against phone companies that cooperated with the program.

The administration has refused to share records of the program with federal courts, invoking a "state secrets" privilege. Under the new proposal, the courts would have access to all documents and would be able to hear claims from the plaintiffs in those cases.

But judges would be asked to determine whether the companies received written certification that the surveillance was authorized by the president and that it was lawful, a proposal the American Civil Liberties Union says guarantees the cases will be dismissed.

"The telecom companies simply have to produce a piece of paper we already know exists, resulting in immediate dismissal," said Caroline Fredrickson, the head of the ACLU's Washington legislative office. She said the bill "does nothing to keep Americans safe and is a constitutional farce."

For future wiretaps, the new measure would require a special court set up under the Foreign Intelligence Surveillance Act to approve any effort to spy on Americans. Authorities could act for up to seven days before seeking a warrant -- more than twice the three-day emergency period under the current law.

The new plan calls for a review of surveillance programs by the inspectors general of U.S. intelligence agencies within a year. And the law would expire in 2012, giving the next administration the opportunity to review the program.