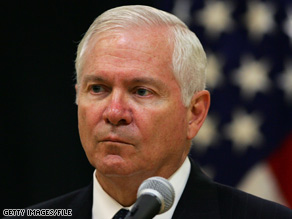 Defense Secretary Robert Gates says Iran's test of a long-range missile shows that it is "a real threat."

"We've been saying as we talk about missile defense in Europe that there is a real threat, and the test this morning underscores it," Gates said hours after Iran's test.

Russia has strongly opposed the U.S. program of expanding the missile defense system into Eastern Europe in countries such as in Poland and the Czech Republic.

Gates was unable to say whether the Iranian test increased what was known to be Tehran's ballistic missile range.

But one U.S. official said the test appears to be in response to the recent military exercises conducted by other nations in the region. Although the intelligence community is closely monitoring the test, the official said, it is believed to demonstrate previously known conventional weapons capability. The official said Iran is "flexing its muscle ... showing it, too, can demonstrate its military muscle."

A U.S. intelligence official said the longer range Shahab-4 ballistic missile is in the "developmental stage," and it "does not appear completion of the new weapon is imminent." It is believed the Shahab-4, when finished, would have the capability to hit parts of Europe, the official said.

Thomas Fingar, the deputy director of national intelligence for analysis, said that "Iran has a kind of hedgehog strategy -- mess with me and you get stung." Fingar said he believes the message of the test was "I have the capacity to inflict pain."

He also said he assumes the Iranian military-industrial people wanted to see how well the missile works. As he put it, "multiple players, multiple motivations" tend to be involved in making a decision to test fire a missile.

Gates' comments came after William Burns, a top State Department official, called Iran as serious a problem as any the U.S. faces today.

Burns, the undersecretary of state for political affairs, made the comments in testimony before the House Foreign Affairs Committee.

See where Iran's missiles could strike »

But Burns, the highest-ranking career diplomat at the State Department, said the United States should not overestimate the threat Iran poses, saying the country's economy is weak and it is diplomatically isolated.

"Iran is not 10 feet tall, nor is it even the dominant regional actor," he said. "Because of its behavior, it can't count on any friends except for Cuba, Venezuela and Belarus."

He added, "And the world's leading financial institutions have largely stopped dealing with Iran, and especially Iranian banks, in any currency. They do not want to risk unwittingly facilitating the regime's proliferation or terrorism activities."

Burns said the United States is trying to work with other countries to press Tehran to stop its nuclear program and end support for militant groups such as Hamas and Hezbollah.

He said Washington is having mixed results.

He said Russia, which helped Iran build a nuclear reactor, "has moved to clamp down" on Tehran, though it has not unequivocally taken Washington's side.

China "has been frustratingly slow" to support the United States against Iran, he said.

Burns wouldn't comment when questioned about a magazine report this month suggesting President Bush had sought $400 million for covert operations inside Iran.

"I'm very well aware of the story, and I can't comment on sensitive intelligence matters," he said.

The White House reacted strongly to Wednesday's test-firing by the Iranians, calling it "a violation of United Nations Security Council resolutions and completely inconsistent with Iran's obligations to the world."

National Security Council spokesman Gordon Johndroe said: "They should also refrain from further missile tests if they truly seek to gain the trust of the world. The Iranians should stop the development of ballistic missiles, which could be used as a delivery vehicle for a potential nuclear weapon, immediately."

He added that the United States, Britain, France, Russia, China and Germany "are committed to a diplomatic path and have offered Iran a generous package of incentives if they will suspend their uranium enrichment activities."

Iran maintains it is pursuing nuclear power for civilian use, not to build nuclear weapons.

Sen. John McCain, R-Arizona, the presumptive Republican presidential nominee, said the tests "demonstrate again the dangers it [Iran] poses to its neighbors and to the wider region, especially Israel."

McCain supports working with Europe and regional allies to deal with Iran, not "unilateral concessions."

His expected Democratic opponent, Sen. Barack Obama of Illinois, said, "We need to change our policy to deal aggressively with the threat posed by the Iranian regime. Through its nuclear program, missile capability, meddling in Iraq, support for terrorism and threats against Israel, Iran now poses the greatest strategic challenge to the United States in the region in a generation."

All About Iran • Nuclear Proliferation • U.S. Department of State