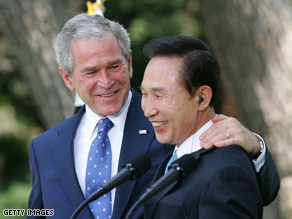 "Our relationship is important vital and I believe it is strong," Bush said.

Bush said he was still concerned about North Korea and said the country has a long way to go before it is taken off his "axis of evil list" as well as removing it from a list of countries that sponsor terrorism.

He spoke hours after thousands of protesters packed the streets of the South Korean capital Tuesday.

While some demonstrations were peaceful, violence erupted at other protest sites. In one instance, riot police fired a water cannon to keep the crowds at bay.

Police said they detained about 80 protesters. They estimated about 2,700 people were participating in the protests, which included a candlelight march and a sit-in. But the organizers said some 10,000 were taking part in the demonstrations.

Bush's weeklong trip to the region is his ninth visit as president.

See a map of Bush's itinerary »

His stop in Seoul comes just a few months after violent street protests erupted over worries about the safety of U.S. beef imports.

While those tensions seem to have eased, the United States' nuclear disarmament deal with North Korea is also a concern.

Michael Green, a former Bush adviser on Asian affairs, and now with the Center for Strategic and International Studies, says Seoul's proximity to North Korea contributes to an ongoing unease.

He added, "On the other hand, the U.S. has to worry a great deal about where terrorists might get nuclear weapons or nuclear material."

After South Korea, the president will go to Thailand for what's being billed as a major Asia policy speech before making his way to Beijing, China, for the Olympics.

CNN's Elaine Quijano and Kathy Paik contributed to this report.