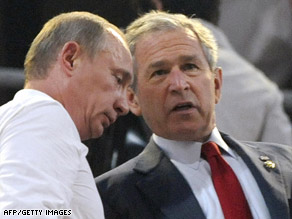 "My administration has been engaged with both sides of this trying to get a ceasefire," Bush told NBC's Bob Costas in an interview in Beijing, China, where the president has attended Olympic events.

Bush was filmed speaking to Russian Prime Minister Vladimir Putin during Friday's opening ceremonies and said Sunday that he "was firm with Vladimir Putin" and that "this violence is unacceptable."

Violence has continued to rage between Russia and the western ally since Thursday, when Georgia launched an operation to crack down on separatists in South Ossetia territory. Russia said it wanted to protect its peacekeepers already in South Ossetia following ceasefires in years past. But Georgia called it a full-on invasion.

And while Russia has accused Georgia of a genocidal plot to cleanse the region of ethnic Ossetians loyal to Russia, Georgia accuses Russia of executing a long-planned war with the aim of taking control of the region -- including a key pipeline that carries Asian oil to Black Sea ports.

"I expressed my grave concern about the disproportionate response of Russia," Bush said of his talk with Putin. "We strongly condemn bombing outside of South Ossetia."

Putin says he's concerned about the flood of refugees arriving in Russia from South Ossetia. Russian officials said more than 30,000 refugees have left South Ossetia and crossed into Russia over the past two days, Interfax reported.

"The actions of the Georgian authorities in South Ossetia are a crime, of course, primarily a crime against their own people," Putin said, according to Russian news agency Interfax.

Meanwhile, Cheney talked to Georgian President Mikheil Saakashvili on Sunday, telling him that Russia's aggression against Georgia "must not go unanswered."

Cheney's spokeswoman Lea Ann McBride said the vice president spoke to Saakashvili to express "the United States' solidarity with the Georgian people and their democratically elected government in the face of this threat to Georgia's sovereignty and territorial integrity."

Georgia withdrew its forces Sunday and offered a ceasefire, which Russia refused.

"The vice president told President Saakashvili that Russian aggression must not go unanswered, and that its continuation would have serious consequences for its relations with the United States, as well as the broader international community," McBride said.

Saakashvili has called on the United States and the world community to stop the "intervention and invasion of my sovereign country."

Two senior officials have told CNN the United States sent envoy Matt Bryza to the region to help with mediation.