Palin's swift rise is the talk of her Alaskan town

WASILLA, Alaska (CNN) -- It was the night before Alaska Gov. Sarah Palin was to accept the Republican vice presidential nomination in a nationally televised speech, and Becky Moore couldn't sleep a wink. 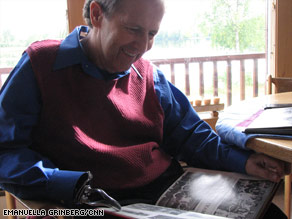 She paced around her room and prayed before sending Palin an e-mail wishing her good luck.

"I was so nervous for her," said Moore, a dietitian who lives in Palin's hometown of Wasilla. "I felt like she was my relative, like she was about to prove herself to the country."

As much as Moore was hoping for the best, there was a part of her that didn't want to share her governor and former mayor with the lower 48, a term Alaskans use to refer to their distant countrymen with a mix of playfulness and disdain.

"No matter what happens, we win. If she becomes vice president, the rest of the country will see what a great leader she is. If she loses, we get her back," Moore said.

The night after Palin's speech, Moore and friends from her book club gathered at Wasilla's Pandemonium bookstore to discuss the Jeffrey Eugenides novel "Middlesex."

But instead, the conversation centered on the poise and bravura with which Palin explained her views on resource development -- another Alaska term for oil and gas drilling -- family values, fighting corruption and reducing the role of government in private lives.

Watch why some say Palin may overshadow Sen. John McCain »

"As a longtime Alaskan, she makes me proud. She's sophisticated and intelligent. She can wear bunny boots and high heels and be comfortable in both," said Paula Esche, a retired teacher who moved to Alaska from Wisconsin in 1963.

Indeed, with each proverbial crack Palin has made in Alaska's political landscape, the story of her rise from hometown girl to political upshot has been retold over and over again in the Alaskan press and some national publications, including Vogue. iReport.com: What do you think of Sarah Palin?

See photos of Palin and her family »

In Wasilla, a railroad town nestled among the mountains of south-central Alaska, she has earned a reputation for pursuing agendas with such doggedness that critics and supporters alike are compelled to acknowledge her fighting spirit.

Palin's family moved to Alaska in 1964, when her father took a teaching job in Skagway. She was 2 months old. Her parents settled in Wasilla a few years later.

Family friend and Matanuska-Susitna Borough Mayor Curt Menard said he would have never guessed that Palin's tenacity would bring her this far. Nevertheless, he is not entirely surprised by her success.

"She has always gone after what she wants with great intensity and careful judgment. She works for what she feels is right," said Menard, who is willing to take some credit for Palin's winning smile as her childhood dentist.

A table in Menard's sunroom is littered with family photos and high school yearbooks that bear testament to the local folklore surrounding Palin.

"We did a lot of hunting and hiking together when the kids were little," said Menard, gesturing to a picture of Palin as a young teen with her sister and Menard's sons, surrounded by moose carcasses in a room for curing big game.

Menard's collection of Wasilla High School yearbooks contains pictures of Palin on the honor society, student council, cross-country team and, most notably, as co-captain and point guard of the 1982 championship basketball team.

In high school, Palin also met her future husband, Todd, who moved to Wasilla in his senior year. In a story that has also charmed its way into the hearts of Palin's constituents, they married at the courthouse in nearby Palmer in 1988 under the eyes of two witnesses they pulled from a nearby senior center.

Palin entered local politics as a Wasilla City Council member in 1992, serving two terms before she campaigned against incumbent Mayor John Stein on a platform of fiscal responsibility and pledges to break up the "good old boys" network.

During her mayoral campaign, many residents of Wasilla fondly recall that she knocked on doors to introduce herself and talk about their concerns. After becoming mayor, she often held community forums in coffeehouses.

Within her administration, however, controversy flared up. After she took office in November 1996, she asked for letters of resignation from six department heads based on allegations that they were still supporting the former mayor. She also fired Police Chief Irl Stambaugh, who unsuccessfully sued her for wrongful termination, according to court records.

"I found the informal manner in which she ran City Council meetings had the flavor of turning city business into a fan club," said Kilkenny, a registered Democrat who moved to Wasilla from Seattle, Washington, in 1981.

This weekend, Kilkenny, one of the few identifiable Palin critics in Wasilla, wrote an e-mail to friends criticizing Palin's track record that rapidly spread to blogs and Web sites.

"Everybody likes her because she's a real nice person. She's always been nice to me and everyone in town," Kilkenny told CNN.com. "I wrote my message in the spirit of providing complete and accurate information. I'm not angry or jealous."

Praise and criticism followed Palin's ascendance to the governor's office after she won the state Republican primary against incumbent Gov. Frank Murkowski and took the general election in 2006.

Earlier this year, when Palin signed off on a contract for a Canadian company to construct a gas line linking Alaska with the lower 48, she earned accolades from Alaskans who favor the development of natural resources. Others, however, said they believe Palin rushed the application process in an effort to win over voters.

"We're giving away finite resources when we should be trying to get the maximum value for them," said Jay Cross, a retired Alaska Guardsman who is a volunteer for Democratic presidential nominee Sen. Barack Obama's campaign. "Why the rush to create a pipeline that's not going to Alaska tidewaters and creating jobs for Alaskans?"

For those without strong political allegiances, the mere presence of an Alaskan on a major party ticket is enough to raise interest.

"I just think it's cool that someone from a small town like Wasilla can get as far as being nominated for vice president of the United States," said T.J. Montañez, 21. "Maybe now the lower 48 will stop thinking we all live in igloos."

All About Sarah Palin • Alaska • Wasilla