Palin meets with world leaders ahead of VP debate

NEW YORK (CNN) -- Before heading out for a trio of well-publicized meetings with foreign dignitaries Tuesday, Sarah Palin received a briefing from the director of national security, Adm. Michael McConnell. 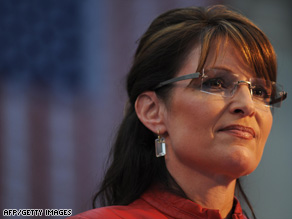 Gov. Sarah Palin is in New York to meet with leaders from around the world.

The appearances with world leaders, taking place on the sidelines of the United Nation's General Assembly meetings in New York, come as the campaign of Republican presidential nominee Sen. John McCain tries to convince voters that Palin is ready for the world stage.

The adviser, Stephen Biegun, formerly a top member of the National Security Council under President Bush, characterized the intelligence briefing as "routine" and said it was the sort of meeting that "is standard for candidates for the vice president and president." Biegun said several officials were present to brief Palin.

Although Palin held photo-ops with the leaders, she refused to take questions from any reporters.

The Alaska governor initially said that no reporters would be allowed to sit in on her meeting with Karzai. She planned to allow in only photographers and one television crew, but she changed her position after at least five U.S. news networks protested.

CNN does not send cameras into candidate events where editorial presence is not allowed.

Nonetheless, Biegun said, "these are relationships that she intuitively understands are very important for the next president and vice president of the United States."

In those get-togethers, Palin kept the focus primarily on energy issues and the growing influence of Russia, according to Biegun.

Palin found Kissinger particularly engrossing; their meeting had been scheduled to last 30 minutes, but the two met for nearly an hour and a half.

"In talking to Dr. Kissinger," Biegun said, "she certainly had a lot of questions about how the United States can develop a cooperative relationship with Russia, what are some of the unique challenges to the current state of Russia's political development, and having been in particular, some of the recent developments we've seen with Russia: backsliding democracy, Russia's incursion into Georgia."

Asked about her meetings with Karzai and Uribe, Biegun said Palin "liked them very much" and "established a great personal rapport."

With Karzai, Palin chatted for half an hour about McCain's desire to send more U.S. troops to Afghanistan. With Uribe, she listened for about 20 minutes as the president discussed the country's security situation and its handling of guerrillas.

According to Biegun, "rather than make specific policy prescriptions, she was largely listening, having an exchange of views, and also very interested in forming a relationship with people she met with today."

Biegun is helping prepare Palin for her debate with Democratic vice presidential nominee Sen. Joseph Biden on October 2 in St. Louis, Missouri. He would not say what specific topics Palin was concentrating on in her study sessions.

James Hoge of the Council on Foreign Relations, said the Palin meetings are meant to "show, just as [Democratic presidential nominee Sen. Barack] Obama did when he went to Germany and gave a speech in Berlin, that she is comfortable on the international scene, that she can hold her own in conversations with foreign leaders.

Democrats warn that Palin's carefully scripted photo-ops, some of which will include McCain, could backfire by bringing attention to the holes in her résumé.

"The big risk that they run with this strategy of having her meet with these leaders individually is that they end up with three days of stories about how she doesn't have foreign policy experience," said Hilary Rosen, a Democratic strategist and CNN contributor.

But Republicans point out that Palin is just following in the footsteps of other national candidates such as Ronald Reagan and Bill Clinton, former governors who needed to beef up their international policy credentials.

"The first thing you do is burnish their foreign policy credentials. You buy them a Rand-McNally, you meet with generals, you get a lot of flags on the stage, and you give a big speech on foreign policy to display you have some command of the world," said Alex Castellanos, a Republican strategist and CNN contributor.

As a 44-year-old governor who just got her passport last year, she has had to fend off accusations that she is not up to speed on foreign policy. In a recent interview with ABC, she admitted that she has never met with a head of state.

Asked last week for specific skills she could cite to rebut critics who question her grasp of international affairs, she replied, "I am prepared."

"I have that confidence. I have that readiness," Palin told voters at a town-hall meeting in Grand Rapids, Michigan. "And if you want specifics with specific policies or countries, you can go ahead and ask me. You can play 'stump the candidate' if you want to. But we are ready to serve."

McCain stepped in, pointing out that as governor of a state that has plenty of oil and gas, Palin was familiar with energy. She knows it to be "one of our great national security challenges," he said.

He also cited her nearly two years as commander of Alaska's National Guard.

"I believe she is absolutely, totally qualified to address every challenge as the next vice president of the United States," McCain said.

CNN's Peter Hamby and Ed Henry contributed to this report.

All About Sarah Palin • United Nations