(CNN) -- Sen. John McCain's decision to suspend his campaign is being played by Democrats as a desperate ploy from a campaign in decline and by Republicans as a courageous move to rescue the economy. 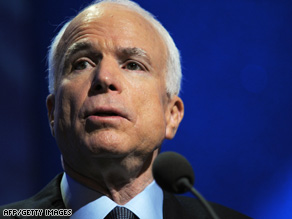 Sen. John McCain says Thursday that the debate that matters is the one taking place in Washington.

The Arizona senator said he won't show up for Friday's presidential debate if no deal is reached on the government's $700 billion bailout proposal, leading Democrats to accuse him of looking for a distraction.

"I think it shows that John McCain is becoming increasingly desperate in his campaign," said Keith Boykin, a Democratic strategist and host of BET's "My Two Cents."

"It's an indication that John McCain shoots from the hip -- or more likely shoots from the lip -- every time he speaks, and he's not a guy who's got the judgment to make decisions," he said.

"Everybody knows that John McCain is very, very good at actually taking tough questions. I think what we have seen here today and yesterday, though, is an example of a statesmen," he said. "I think it's ludicrous to say that by wanting to put politics aside, John McCain is somehow injecting politics into the debate."

McCain said Thursday that Washington needs "all hands on deck" to work on the government's proposed $700 billion bailout plan.

But Newt Gingrich, the former speaker of the House, called McCain's decision to suspend his campaign the "greatest single act of responsibility ever taken by a presidential candidate."

"It is surprisingly irresponsible and politically dangerous for the Obama campaign to try and insist on a debate Friday night," he said.

McCain says he does not think the bailout proposal will pass as is, and he is returning to Washington to push what he sees as "fundamental improvements" to the legislation.

Obama's campaign says they can take care of the bailout proposal and still hold the first presidential debate, scheduled to take place Friday in Oxford, Mississippi.

The University of Mississippi, which is hosting the debate, has already invested millions in preparing for it.

But considering that Obama and McCain are senators, Republican strategist Bay Buchanan said both candidates should focus on the bailout plan because it's their job.

"They should be doing their job, especially at a time of crises when their vote, when their leadership could really make a difference in this bill," she said. "These fellows are the senators. It is their responsibility. It's what we pay them to do."

Paul Begala, a Democratic strategist, said the debate is the most important thing the candidates could do right now.

"It's preposterous that we can't have a presidential debate in the middle of this economic crisis. We had a presidential campaign in 1864, when Sherman was marching on Atlanta. We had a presidential election in 1944, when D-Day was going on in Normandy," he said. "We can have a debate on Friday. In fact, it's probably the most important thing McCain and them could be doing, would be to debate the issues."

I-Reporters told CNN that no matter what, they want to see the debate go on.

Len Parks, an independent from Stockbridge, Georgia, said he liked both candidates, but now he will probably vote for Obama.

"It made no sense to me for him to suspend his campaign. I think he's kind of grandstanding here," Parks said.

"I want to see John McCain show up, I know he's trying to do his best, and I know it's his duty to be there for this vote on the economy and the $700 billion bailout. But he also needs to be there (at the debate) because Americans need to hear from him," she said. "So hopefully this doesn't hurt him, hopefully he takes Obama's advice and multitasks and shows up."

"What is going on here is that John McCain has been in a rut the last couple of weeks ever since this economic crisis broke. It plays to the economic advantage that Democrats have in this campaign," he said, noting that polls show that more people think Obama would do a better job handling an economic crisis than McCain.

Obama has been on a steady rise in national polls this past week. According to CNN's latest poll of polls, he now leads McCain by 4 percentage points.

"The Democrats, of course, are very afraid that McCain is going to swoop into these delicate negotiations on Capitol at last minute and when they reach an agreement, he's going to claim credit for having brought those negotiations to a successful conclusion," Silverleib said.