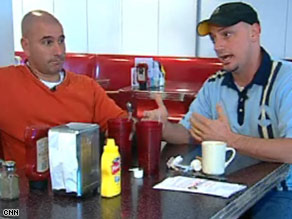 Mike Milburn, left, and Dan DeGarmo are skeptical about what both candidates bring to the table.

No Republican has ever won the White House without winning Ohio, a state that has received more visits from the candidates and their running mates this year than any other.

Voters there are divided.

With less than a month to go until the election, it's concerns about the financial markets and the economy that dominate the airwaves at the town's radio station.

"The only other people that've experienced something like what we're experiencing now are our grandparents or our great-grandparents," host Dan Ramey said on his radio show on WBEX-AM.

At Carl's Townhouse, the outlook among the breakfast crowd was gloomy.

"I think that the money they just passed in Congress is just postponing what's going to happen in the future, which I think is going to be another Depression," said resident Mike Milburn.

For Dan DeGarmo, it's the same -- his fourth child is due soon.

"I don't see how either of those candidates offer any solid solutions that give Americans comfort," he said.

Both men are registered Republicans. Milburn said he might not vote at all, while DeGarmo said he plans to vote for McCain.

People like Theresa Hall, an undecided Independent, are the targets of both candidates as they enter into the final weeks of campaigning.

"It seems like when you watch them, they're pretty much just at each other. He says this, he says that," Hall said.

Along Chillicothe's Main Street, buildings in need of repair provide reminders that this once booming industrial town has seen better days.

Obama's troops are trying to make inroads among the population of 22,000 that went for George Bush in the past two elections, and team McCain is working to keep the county red.

Right now, people say the town is divided -- and so are the predictions.

"This community seems to just be enough Republican to help [McCain] out," WBEX's Ramey said, adding that his gut feeling is that will be the case this year.

"Honestly, I think Obama is going to win," he said.

Weighing sentiments like those is one way to get a pulse on how this town might vote in November.

But in one indication of the town's importance, McCain has already visited, and Obama is scheduled to stop by on Friday.