Poll findings could be trouble for McCain

(CNN) -- Economic woes are impacting the presidential race more than at any time since the primaries ended, according to a poll released Tuesday -- a potentially troubling sign for John McCain. 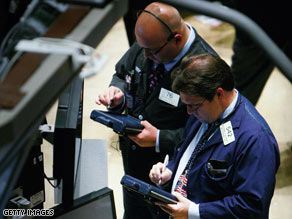 Concern over the economy is the highest it has been since June, according to a new poll.

The poll found 61 percent of registered voters say the economy is extremely important to their vote, a jump of 3 points since June. The economy ranks more than 10 points higher than the next most important issue on voters' minds, terrorism.

The findings highlight an unfavorable political landscape for McCain, whose party has controlled the White House for the past eight years. Voters have also consistently ranked the Arizona senator lower than his Democratic rival on the question of which candidate is better equipped to steer the country through the economic crisis.

More potentially damaging news for McCain's White House hopes is that 76 percent of voters who responded to the CNN/Opinion Research Corp. poll say the United States is in a recession, and 40 percent say another depression is likely to hit within a year.

A CNN/Opinion Research Corp. poll released earlier Tuesday also showed two-thirds of voters said they're scared about the way things are going; three in four said the current conditions in the country are stressing them out.

"If Americans are angry about the state of the country, they're probably more angry at the Republicans than the Democrats, since the GOP has controlled the White House for the past eight years," Holland said.

The latest poll numbers make clear just how different the political climate is in 2008 from four years ago, during President Bush's successful re-election bid. In a late October poll in 2004, fewer than four in 10 voters said the economy was an extremely important concern, while nearly 50 percent identified terrorism as the most salient issue facing the nation.

That playing field would certainly would have been friendlier to McCain, who has long received higher marks from voters on issues of national security.

"Since McCain is still seen as the best candidate to handle terrorism and Iraq, he might be doing much better in the polls today if the economy hadn't muscled national security issues out of the top spot," Holland said.

If 2008 resembles any recent political year, it's 1992, when roughly the same number of Americans thought the country was headed in the wrong direction --mainly because of the economic recession that year. That issue is largely credited with helping then-Arkansas Gov. Bill Clinton defeat President George H.W. Bush.

"In 1992 it was 'the economy, stupid' that got Bill Clinton elected. When Americans are in a bad mood it does have political consequences," CNN Senior Political Analyst Bill Schneider said. "The angrier you feel, the more likely you are to vote for Obama."

The CNN/Opinion Research Corp. poll was conducted by phone with 1,058 adult Americans on October 17 to 19. The poll has a sampling error of plus or minus 3 percentage points.