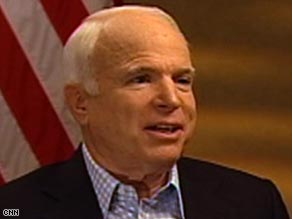 Sen. John McCain says he will consider a second economic stimulus package if he is elected president.

"And the thing that probably may encourage them a little is that Sen. Obama has been wrong," McCain said in an interview aired on CNN's "The Situation Room" on Wednesday.

"He was wrong about the surge in Iraq. He still fails to acknowledge that he was wrong. I mean, remarkable," the Republican presidential nominee continued.

Enemies would not similarly challenge McCain, he said, because he's already been tried.

Watch McCain talk about being tested »

On the economy, McCain defended his vote in favor of the government's $700 billion plan to prop up the lending industry, despite his insistence that as president he would cut spending.

He said he will consider a second economic stimulus package if he is elected president. His running mate, Alaska Gov. Sarah Palin, said the day before that "this is not a time to use the economic crisis as an excuse for reckless spending."

"Homeowners are the innocent bystanders in a drive-by shooting by Wall Street and Washington," McCain said Wednesday.

"It never should have happened," he said of the mortgage crisis that has shaken financial markets, and it would not have happened if he had been president, he said.

He attacked Obama, his Democratic rival for the White House, for saying that "when you spread the wealth around, it's good for everybody."

That is "certainly not something I would ever do," he said.

Watch where the candidates stand on the economy »

Obama made the comment as he defended his proposal to raise taxes on couples earning more than $250,000 a year while cutting taxes for those with lower incomes. Obama says his plan would lead to lower taxes for 95 percent of American families.

McCain contended that Obama has been "all over the place" with his economic proposals.

And he said flatly, "I won't raise taxes on anybody."

He also vowed to "fix Social Security," refusing to rule out raising the retirement age or allowing some Social Security funds to be invested in the stock market.

McCain said he is confident of victory November 4, though many polls show him trailing far behind Obama.

CNN's Poll of Polls showed him 9 points behind Obama nationally on Tuesday, with 7 percent of voters undecided.