(CNN) -- Less than 24 hours before the presidential election, Kevin Sheen has yet to decide who will get his vote. 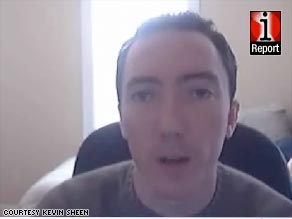 iReporter Kevin Sheen of Nebraska says he has yet to decide on who to vote for.

Sheen is one of the 5 percent of American voters who are either undecided or could change their mind before Election Day.

It's not unusual for a small percentage of Americans to be undecided in the final hours before casting their votes.

Watch the psychology behind undecided voters »

This year, the most recent CNN/Opinion Research Corporation Poll shows the number of undecideds is much smaller. iReport.com: One year later, still undecided

Sheen, of Lincoln, Nebraska, says his vote is coming down to one issue: abortion. Sheen says he's "definitely pro-life" and he's trying to decide whether Democrat Barack Obama or Republican John McCain is more in line with his views.

"Neither of them have the track record I would like in a political candidate. So at this point, it's me sort of deciding upon, who do I think will be the best representation for if something is able to happen with the issue of abortion," he says. iReport: Still undecided? What gives?

Does he hope to make his decision before heading into the polling booth?

"That's the plan anyway," he says.

The presidential candidates and their running mates were visiting more than a dozen states Monday in a final push to try to sway voters like Sheen to their side. With hours to go in this campaign, polls show McCain trailing Obama by 7 percentage points.

McCain began a seven-state blitz with a rally in Tampa, Florida, on Monday morning. He then was heading to Tennessee, Pennsylvania, Indiana, New Mexico and Nevada. McCain ends the day in his home state of Arizona. Except for Tennessee and Arizona, McCain either trails or is tied in the states he is visiting, according to recent polling.

"There's one day left until we take America in a new direction, my friends, and we need your help," he said at a stop in Florida.

Watch "we need your help" »

"McCain's got to run the table on Tuesday night to really stay in this, or flip Pennsylvania," said John Avlon, author of "Independent Nation." "McCain's argument about the unified-control Congress -- what the liberal super-majority would do -- is resonating with independents ... but he's got a lot of ground to make up."

Obama also began Monday in Florida, a state President Bush won in 2000 and 2004. CNN's latest poll of polls shows Obama with a slight lead over McCain in Florida, 48 percent to 46 percent, with 6 percent unsure.

The Illinois Democrat then headed to two other states that Bush won but where he is leading this year: North Carolina and Virginia.

A ground war for the last undecideds -- and to encourage high party turnout -- ratcheted up in key battleground states. In Pennsylvania, more than 500 paid Obama staffers and thousands of volunteers are working around the clock for the final push in the swing state. The smaller McCain camp ground army has 100 paid staff in the state and roughly 15,000 volunteers -- targeting union members who tilt conservative on social issues.

In McCain's home state of Arizona, iReporter Kyle Aevermann, 21, is preparing to vote in his first presidential election. He is one of the few who has yet to reach a decision on his vote, although he knows he will not vote for the state's long-time senator.

Aevermann is debating between Obama and Green Party candidate Cynthia McKinney, although he acknowledges voting for McKinney might be a "waste of a vote."

"Until the past few months, I wanted nothing to do with politics and I really have learned to become interested in it," he says.

But he adds, "I'm excited for the election to be over with."