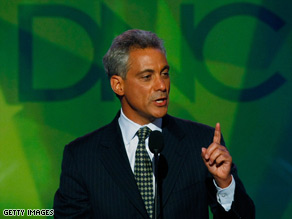 The Office of the Chief of Staff oversees and coordinates activities and communication among various departments of the administration. It is considered one of the top positions in Washington.

"Rahm knows the Hill, and he knows the White House. He is a brilliant strategic thinker and someone who knows how to get things done."

Manley said allegations that Emanuel is a true partisan are "ridiculous."

"Rahm understands politics is the art of compromise. He's got a deeply held set of views, but he also understands to get things done you have to compromise," he said.

Watch what Emanuel says about being considered for the job »

"This is an ironic choice for a president-elect who has promised to change Washington, make politics more civil and govern from the center," he said in a statement.

In his statement accepting the position, Emanuel directly addressed Republicans who might have concerns with his appointment.

"We often disagree, but I respect their motives. Now is a time for unity, and Mr. President-elect, I will do everything in my power to help you stitch together the frayed fabric of our politics and help summon Americans of both parties to unite in common purpose," he said. iReport.com: Who should be in Obama's cabinet?

Emanuel, who has a reputation as a tough political infighter, is credited with helping Democrats take control of the House in 2006.

The Chicago politician was elected to the House in 2002 and is the fourth highest-ranking member of the chamber's Democratic leadership. He worked on President Clinton's first presidential campaign and served as a White House adviser to Clinton.

Emanuel choked up as he said how glad he is his parents are alive to see him become chief of staff for the first African-American president.

"I know that he and Barack Obama have a very good relationship going back a long time. So it touches all of the critical elements, it seems to me, in beginning that kind of transition we'd like to have. So I think it's a great choice, and I think the president-elect will be well-served with Rahm Emanuel," he said.

"Rahm knows Capitol Hill and has great political skills. He can be a tough partisan but also understands the need to work together. He is well-suited for the position of White House chief of staff," the South Carolina senator said.

Graham said he and Emanuel worked together during the presidential debate negotiations, and "when we hit a rough spot, he always looked for a path forward."

David Gergen, a CNN senior political analyst who has worked in five administrations, said the contrasting styles between Obama and Emanuel could help the new president get things done in Washington.

"They are obviously setting up a good cop/bad cop routine in the White House. ... Barack Obama can be the good guy," Gergen said.

At a news conference Friday, Obama is expected to take questions and talk about his first steps as president-elect.

All About Rahm Emanuel • Barack Obama