(CNN) -- A conservative leader Friday laid the Republican Party's poor showing at the polls at the feet of moderates who, he argues, led the party away from its core principles. 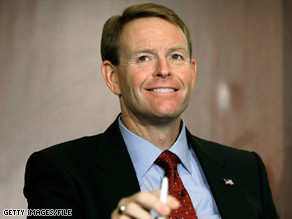 Tony Perkins of the Family Research Council says the GOP must return to conservative principles.

Tony Perkins of the Family Research Council told CNN that conservatives need to take back control of the GOP if the party is to return to its winning ways.

"Moderates never beat conservatives. We've seen that in past elections," he said.

Rejecting suggestions that the conservative movement was viewed as being out of touch with the electorate, Perkins says the Republican Party needs to go back to basics.

"It's a return to fundamental conservative principles that Ronald Reagan showed work and that people can be attracted to," Perkins said.

"There was clearly no mandate to shift the country to the left on social issues," Perkins said. "What Tuesday was, was a fact that people wanted change, and it's a rejection of a moderate view."

Watch what went wrong in the McCain campaign »

David Keene of the American Conservative Union also said the idea of the Republican Party as the party of smaller government was undermined by the rapid increase in government spending over the last eight years.

"Republicans in Congress began to act like the Democrats they'd gotten rid of in the '90s. The president began to spend money like he was Lyndon Johnson, and the result was that voters began to get very upset," Keene said. "So, yes, you have to go back to your basics."

Perkins' comments come after a post-election conservative conclave met at an undisclosed location in northern Virginia on Thursday.

One of the prominent conservatives who attended the meeting, Grover Norquist of Americans for Tax Reform, said the group's goal was to rebuild the conservative movement in all 50 states.

"There's no one leader. There are many leaders," Norquist said. "One of the things that the meeting decided is they wouldn't decide something. They won't endorse a candidate. It was the first meeting of a series of meetings of how do we structure, how do we increase building."

Perkins also said the meeting was meant to get the various wings of the conservative movement talking again.

"What has made the conservative movement strong is when you have social conservatives, fiscal conservatives and foreign policy conservatives working together," he said. "This was the first step in what will be a long journey in rebuilding that communication and that common vision."

Watch the fighting between the McCain and Palin camps »

Norquist said one of the lessons the conservatives took away from Tuesday night's results was that they focused too much on the presidential race and not enough on helping congressional candidates.

In addition to Sen. John McCain, a Republican standard bearer, losing his bid for the White House, House Republicans will have at least 26 fewer seats in the next Congress, and Republicans could have a few as 40 seats in the Senate.