(CNN) -- President Bush had a "relaxed" and "friendly" meeting with President-elect Barack Obama after he and first lady Laura Bush welcomed their successors to their future home Monday, a White House spokesman said. 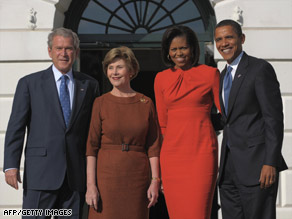 President Bush and Laura Bush welcome Barack and Michelle Obama to the White House on Monday.

Perino said the two discussed national and international issues but did not provide specifics of the conversation. Bush also gave Obama a tour of the White House's living quarters, including the Lincoln bedroom.

Bush and Obama held a private meeting in the Oval Office, while the first lady gave incoming first lady Michelle Obama a tour of the residence.

The president and president-elect walked together along the Colonnade by the Rose Garden before entering the Oval Office together. They briefly waved to reporters along the way.

Obama and Bush were not expected to speak on camera after their meeting.

The two met in the Oval Office for just over an hour. When President George H.W. Bush hosted President-elect Bill Clinton after the 1992 election, the two talked for nearly two hours.

Monday's meeting was a historic formality, but it was also a time for serious talks. It marked the first time Obama has visited the Oval Office.

Bush and Obama "had a broad discussion about the importance of working together throughout the transition of government in light of the nation's many critical economic and security challenges," said Stephanie Cutter, spokeswoman for Obama's transition team.

"President-elect Obama thanked President Bush for his commitment to a smooth transition, and for his and first lady Laura Bush's gracious hospitality in welcoming the Obamas to the White House," Cutter said.

A day earlier, a leader of Obama's transition team said the president and president-elect were expected to discuss "a broad range of issues," focusing on the economy.

"It's clear that we need to stabilize the economy, to deal with the financial meltdown that's now spreading across the rest of the economy. The auto industry is really, really back on its heels," transition team leader John Podesta told CNN's "Late Edition" on Sunday.

Podesta said Obama will push Congress to enact "at least part" of an economic package before he takes office in January, but said the problems Americans face need short- and long-term approaches.

The president and president-elect also were expected to talk about national security and the war in Iraq. Go inside the Oval Office

Despite the negative tone of the campaign season -- in which Obama frequently campaigned against what he called Bush's "failed policies" -- Bush has pledged to do everything he can to make sure they have a smooth transition. iReport.com: What's your message for Obama?

"When I called President-elect Obama to congratulate him on his historic victory, I told him that he can count on my complete cooperation as he makes his transition to the White House. Ensuring that this transition is seamless is a top priority for the rest of my time in office," Bush said in his radio address this weekend.

Podesta said cooperation with Bush administration officials has been "excellent" since Tuesday's election.

Watch more on the transition to power »

Obama said he was "gratified by the invitation" to meet with the president and his wife.

"I'm sure that, in addition to taking a tour of the White House, there's going to be a substantive conversation between myself and the president," he said at a news conference Friday.

"I'm going to go in there with a spirit of bipartisanship and a sense that both the president and various leaders in Congress all recognize the severity of the situation right now and want to get stuff done," he said.

"Let's not forget that Barack Obama ran against President Bush every day when he was taking on John McCain. While they will be cordial, I bet you it will be uncomfortable," Preston said.

As the president and president-elect met in the Oval Office, Perino gave Robert Gibbs a tour of the White House press office.

Gibbs was the communications director for Obama's presidential campaign. He has not officially been named the incoming press secretary, but he is widely considered the top contender for the position.

Cutter said that after Laura Bush gave Michelle Obama a tour of the residence, the first lady and her successor discussed raising daughters in the White House.

"Mrs. Obama was honored to finally meet the first lady, who was a gracious hostess," Cutter said.