Commentary: Why U.S. has two half-presidents

(CNN) -- Who is the president of the United States? The real president? 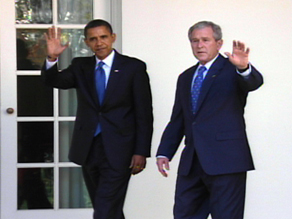 Obama and President Bush wave to reporters as they head into the Oval Office Monday.

Right now, the US may have two of them -- neither entirely up to the job.

In constitutional terms, George W. Bush occupies the Oval Office until his term ends on January 20 with the inauguration of his successor.

But a new CNN/Opinion Research Poll finds that Bush is the least popular president since pollsters first began measuring approval ratings half-a-century ago.

His Republican party has, of course, just been defeated in presidential and congressional elections and many Republicans blame him personally. Democrats blame him for a whole lot more. So even though the calendar gives him two more months, he has virtually no mandate left.

Barack Obama isn't president. His supporters in the United States and around the world can barely contain their excitement about what's ahead, but for now he has only the nebulous position as the next guy in line, the "president-elect."

In constitutional terms, the president-elect doesn't have any legal authority, but that hasn't stopped him. Obama is exercising all the authority he can.

He's come forward quickly to talk about his plans. He's pushing Bush to support a bailout for the US auto industry before Bush leaves office. Obama's made it clear that he expects measures for the economy from the Congress too.

"While we must recognize that we only have one president at a time and that President Bush is the leader of our government, I want to ensure that we hit the ground running on January 20 because we don't have a moment to lose," Obama said.

There are 11 weeks between the election and the inauguration, the in-between time known as the Transition. But Obama is compressing the calendar.

It could be that the crisis in the US economy demands strong leadership right now and the American people expect him to offer it. It could also be that Obama doesn't want to wait.

"He is immediately muscling his way into power," complains former Bush speechwriter David Frum. "Barack Obama said at his first press conference that the US has only one president at a time. He didn't say who that president was."

Maybe there isn't just one president - more like two half-presidents, one wounded and one waiting, and both trying to make the most of the two months ahead.