(CNN) -- Anh "Joseph" Cao is hoping an election Saturday will make him the first Vietnamese-American to be elected to Congress. 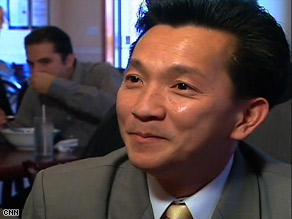 Anh "Joseph" Cao would be the first Vietnamese-American to serve in Congress if elected Saturday.

The 41-year-old Cao (pronounced Gow) is running in Louisiana's 2nd Congressional District, which contains most of the city of New Orleans, against the indicted incumbent Democrat, Rep. William Jefferson.

Cao's main appeal is that he is a Republican alternative to the controversial Jefferson.

Jefferson, who has held the seat since 1991, is awaiting trial for allegedly stashing $90,000 in bribe money in his freezer. But so far, those allegations haven't kept Jefferson from seeking another term, or getting the most votes in last month's Democratic primary.

Cao, an immigration attorney who's married and has two daughters, is keenly aware of the fact that he was virtually unknown before this campaign began and has never held public office before.

His only previous political experience was running for the Louisiana State Assembly in 2007 as an independent. He lost. But these limitations haven't handicapped him from raising around $200,000 in campaign contributions during this election.

State Republicans feel Jefferson's legal troubles may provide their best opportunity to win his seat, and the Republican National Congressional Committee is providing an additional $42,000 to help before the election Saturday.

Much of that money will be used to energize election-weary voters to get out and vote.

Silas Lee, a political analyst in New Orleans, says that getting core supporters to the polls will be key to who wins. In September, Hurricane Gustav postponed the process, causing the election to be delayed until Saturday.

Jefferson, who is black, still enjoys significant support in the second district, which is heavily African-American and Democratic. But Cao believes the time is right for him to reach across racial and political divides for the betterment of the district.

"Jefferson has a large core of voters," Cao says, and "the biggest challenges are to convince that core of voters that the best thing for Louisiana, for the district, is to have them vote against the person that they have supported for a very long time."

Lee says Cao's biggest advantage simply may be that he is not Jefferson. He says Cao needs to keep telling voters that "I am not William Jefferson. I will not embarrass this district."

Running up to the election, Cao supporters stood with signs on New Orleans' St. Charles Avenue as the area's famous streetcars hauled hurried workers through the morning rush hour. Drivers, mostly white and middle class, honked their horns and gave thumbs-up in support.

Cao claims to have made inroads with many disgruntled Democrats who can no longer support Jefferson, and has spent a lot of time talking with African-American church groups, trying to convince them that he will best serve them in the ongoing rebuilding of New Orleans.

Cao says he is concerned the people of the district are not getting the help they need. Jefferson "is more consumed with fighting his legal troubles than he is with helping the people of his district," he says.

Cao says he understands the "melting pot" nature of his adopted state.

He came to the United states in 1975 at the age of 8 along with an older sister and younger brother. His parents and five other siblings had to stay behind in Vietnam as it fell to the communists.

His father, who was an officer in the South Vietnamese army, spent seven years in a communist prison. It wasn't until 1991 that his family was reunited in the United States.

Cao says that it is important to have a Vietnamese-American in Congress to be a voice for the 1.5 million Vietnamese in the United States, and that his experience as an immigration attorney can bring a needed insight to the hotly debated issue of immigration.

He says he considers himself a moderate, fiscally conservative Republican. Cao says there is Asian tradition to be frugal, but he is more moderate when it comes to issues like immigration and gay rights, although he does not support same-sex marriage.

With the election of Louisiana's Bobby Jindal, the country's first Indian-American governor, Cao believes the state has come a long way in dispelling the racial stereotypes long associated with it.

"We can finally get away from the image of David Duke and some of the other politicians that gave Louisiana a bad name," he said.

He says that in this tight race, he has confidence in the people of the second district.

"A large portion of the community is able to look beyond whether one is black or white, or Asian, to vote for a person they believe will best represent the district."