Blagojevich made name as a friend of the common man

(CNN) -- A day before Democratic Illinois Gov. Rod Blagojevich was busted by federal investigators on corruption charges, he dared authorities to tape his phone calls if they thought he was guilty of anything. 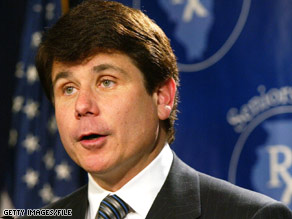 Illinois Gov. Rod Blagojevich, shown here in 2003, was known as a tireless campaigner.

"If anybody wants to tape my conversations, go right ahead, feel free to do it," Blagojevich said Monday outside a Chicago window factory where workers were protesting their layoffs. His comment came in response to a reporter's question about corruption allegations.

During his political career, Blagojevich made headlines. A native Chicagoan, he was thought of as a charismatic guy who always liked to ingratiate himself to the working man. But he was never considered a natural politician, particularly when he first began exploring a run for the governorship in 2002.

His father, Rade Blagojevich, was a Yugoslavian immigrant who came to America after World War II. The elder Blagojevich worked in a steel mill to support his family, which was then living on the city's then-downtrodden northwest side.

As a boy, Blagojevich held odd jobs -- shining shoes, delivering pizzas -- and worked in Alaska for two summers in his teens. He used the money to enroll in Northwestern University, a prestigious school in Evanston, Illinois, just outside of Chicago. He went on to law school at Pepperdine University, then went back to Chicago after graduation to be a lawyer.

Blagojevich later joined the State's Attorney Office in Cook County -- the county in which Chicago is located -- and built a reputation for prosecuting domestic violence cases.

During his time as a lawyer, where Blagojevich grew to enjoy the increasing public spotlight, he began flirting with the idea of running for office. He met his wife, Patricia Mell, in 1988 at a political fundraiser for her father, well-known Chicago Alderman Richard Mell. Blagojevich started working in the father's office, married Patricia Mell and had a daughter, Amy. They had another daughter a few years later.

He served in the Illinois House from 1992 to 1996, representing the North Side Chicago district before moving on to Congress in 1997.

During his three terms in Congress, he helped bring $240 million in federal funds to the Chicago Transit Authority and an additional $10 million to help protect Lake Michigan's shoreline. He grabbed headlines in 1999 when he traveled to Yugoslavia with the Rev. Jesse Jackson to negotiate the release of three American soldiers. Blagojevich met with then-President Slobodan Milosevic, who later faced a war crimes tribunal but died of a heart attack before the proceedings were concluded.

Blagojevich set his sights on the governorship in 2002 with an aggressive appeal to the workaday Illinoisan. He portrayed himself as a regular guy who wanted to do right by the middle class.

At one point, a staunch supporter of his Republican opponent, Michael P. Flanagan, marveled to the Chicago Sun-Times that he was impressed by the number of appearances Blagojevich was making during the campaign.

Blagojevich was able to leverage a string of endorsements from popular figures like Chicago Mayor Richard M. Daley. He also got the support of the Service Employees International Union, the Illinois Federation of Teachers, the American Federation of State, County, and Municipal Employees, and the International Brotherhood of Teamsters.

In the 2002 governor's race, Blagojevich rode to victory 7 points ahead of opponent Jim Ryan.

Blagojevich commenced his re-election campaign in 2006 by promising not to raise state income or sales taxes during his second term.

In May 2008, Blagojevich proposed a $150 million initiative to combat youth violence. In July, he pardoned 19 convicted criminals, including several who had been exonerated, and in August called a special legislative session to consider reducing state construction costs in order to increase money for schools.

Earlier this week, Blagojevich was in the news again -- standing beside and supporting the workers suddenly laid off at the Chicago window factory. The employees complained that the layoffs came without the 60 days' notice required by federal law.

Speaking to reporters as he stood with the workers, Blagojevich spoke of the need to follow the law.

"We are going to do everything possible here in Illinois to side with these workers," he said. "And it isn't just lending them moral support, but it's ... making sure that we have our court system enforce the federal laws so these workers are getting what they're entitled to under the law and under what is the right thing to do."

All About Rod Blagojevich • Illinois • Chicago