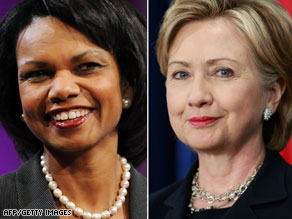 "They talked just very generally about policy -- the challenges, the opportunities -- talked a little bit about the job of secretary of state, talked about the 'building,' managing a big operation," McCormack said.

Former Secretary of State Madeleine Albright said Tuesday that important information often is exchanged during such dinners between outgoing and incoming secretaries of state.

Albright, who was former President Bill Clinton's top diplomat during his second term, said she had a similar dinner with Colin Powell, President Bush's first secretary of state, in 2001.

Watch Albright give her advice to Obama »

"I'm sure they had a social part of it, but Secretary Rice told her what the major challenges are, how the department works -- we call it 'the building' -- and, generally, I think they are very nice times," Albright said.

"It's just a matter of really turning over the most important job in the world on foreign policy," she added.

Albright said Clinton will have to get up to speed on a number of issues, including the status of negotiations the U.S. is engaged in, who will be part of her team and how she will work with other members of Obama's national security team.

"I know from talking to her that she has a great sense of excitement and desire to ... reintroduce America to the rest of the world," said Albright, who said she thought that Clinton would be "a very great secretary of state."

Earlier, Rice said she was looking forward to meeting her successor and said she believes Clinton will do "a great job."

"I talked with her and we're going to sit down, and I'm really looking forward to it. I've known her a long time, and she is someone that I admire," Rice told CNN on Sunday.

Despite being from different parties -- and Clinton's tough criticism of Bush's foreign policy while she was a Democratic presidential candidate -- Rice has been effusive in her praise of the former first lady.

"President-elect Obama has made his choice, and he's made a terrific choice. Hillary Clinton is somebody of intelligence, and she'll do a great job," Rice told ABC News on Sunday.

"She also has what's most important to being secretary of state, and that is that you love this country, and you represent it from a basis of faith in its values. And I know that she will do that," Rice added.

Obama's decision to tap Clinton as his top diplomat already has brought about changes. On Tuesday, former President Clinton released the corporate sponsors of a Clinton Global Initiative meeting in Hong Kong, a practice he previously has resisted.

The former president agreed to make it a regular practice to disclose the sponsors of his global initiative as part of a deal with the Obama transition team to allow the nomination of his wife to go forward.

He also has agreed to allow State Department officials to review his speeches and other personal activities.

All About Condoleezza Rice • Hillary Clinton