(CNN) -- A new national poll suggests that three out of four Americans feel President Bush's departure from office is coming not a moment too soon. 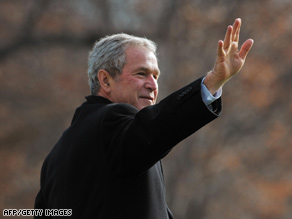 Twenty-eight percent of those polled say President Bush is the worst president in U.S. history.

"Earlier this year, Bush scored some of the lowest presidential approval ratings we've seen in half a century, so it's understandable that the public is eager for a new president to step in," said Keating Holland, CNN polling director.

The portion who say they won't miss Bush is 24 percentage points higher than the 51 percent who said they wouldn't miss President Bill Clinton when he left office in January 2001. Forty-five percent of those questioned at that time said they would miss Clinton.

The poll indicates that Bush compares poorly with his presidential predecessors, with 28 percent saying that he's the worst ever. Forty percent rate Bush's presidency as poor, and 31 percent say he's been a good president.

Only a third of those polled said they want Bush to remain active in public life after he leaves the White House. That 33 percent figure is 22 points lower than those in 2001 who wanted Bill Clinton to retain a public role.

"But no more. The public has completely lost confidence in this president," Schneider said.

Bush has dropped on a number of measures, but possibly the biggest is that only 20 percent say he inspires confidence, Holland said.

"That's an important figure when the country is facing its biggest economic crisis in a generation," he added.

When running for the White House in the 2000 presidential campaign, Bush promised to be a uniter and not a divider. But 82 percent of poll respondents felt that Bush did not unite the country, compared with 17 percent who said he did.

"The vast majority of Americans believe he betrayed his promise to unite the country," Schneider said. "He took a country that was divided under President Clinton and he divided it worse."

Only 27 percent of those questioned in the poll approve of the way Bush is handling his job as president; 72 percent disapprove.

"President Bush's job approval rating has been at or below freezing since the beginning of the year," Schneider said. "The current 27 percent approval rating is one of the lowest ratings for any president, ever."

The CNN/Opinion Research Corp. poll was conducted December 19-21, with 1,013 adult Americans questioned by telephone. The survey's sampling error is plus or minus 3 percentage points.