LONDON, England (CNN) -- Let's say you were making a film. Which do you think would be harder? A. Coordinating a mass alien invasion B. Invoking tidal waves and tornadoes C. Telling a prehistoric love story. 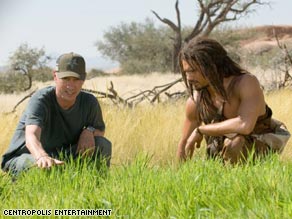 Roland Emmerich and Steven Strait (D'Leh) discuss a scene shot in Namibia when the young hunter discovers farming for the first time.

For Roland Emmerich, the answer is C. He says "10,000 BC" is without a doubt the most difficult film he's ever made. It wasn't the time-consuming graphics that took the greatest toll, nor the need to re-record a lot of the dialogue. No, the most challenging aspect of this film was, um, the weather.

"You're obsessed with the weather channel," Emmerich says, of the duration of filming. "Ninety percent of this movie was [shot] outdoors."

Filming started in the wintry peaks of New Zealand's South Island, then moved to Cape Town in South Africa, then further north to the desert of Namibia.

But it wasn't just the weather that tested the filmmakers' skill, patience and stamina.

see scenes from the film »

Visual effects supervisor Karen Goulekas started working on project two years before principal filming even started. She broke down the script to see what could be done, and what couldn't, then set about the bringing prehistoric animals back to life.

Perhaps her biggest challenge was to create the film's "terror birds", flightless predators with huge beaks that hunt like sharks, suddenly piercing through long grass to snatch their prey before disappearing again. The birds were based on a number of images.

During filming the terrifying bird was actually a blue head on a stick. "It's been an experience," says Camilla Belle (Evolet), "I've never worked with blue birds before and all that fun stuff."

After seeing off all manner of prehistoric threats, the film's hero D'Leh and his assembled army are awestruck by an immense 'lost' civilization dominated by pyramids that reach up into the sky.

Not only did the filmmaker build the pyramids (at Dune 7 in Namibia), they also built miniature replicas of the pyramids, 'God's palace', the slave quarters and the Nile River. The buildings were made in Munich before being transport to Namibia in 15 sea containers. Once assembled, they covered an area of 100 square meters. see the pyramids during a battle scene in the film

What to wear when you live in 10,000 BC? Presumably there wasn't much choice in those days, which gave the film's costume designers plenty of scope to use their imagination. They dressed the Yagahl tribe, or mammoth hunters, in antelope fur and hides in place of mammoth. But the weather was so cold during filming that some actors also wore thermals underneath.

The final scenes required dressing 800 extras as slaves. Each costume had to be handmade to conceal the stitching. Says costume designer Renee April: "We had an army in the workshops making beads from clay and glass and sewing them onto the costumes as well as making the fabric and headdresses." 1000 sandals also had to be made to order.

Most of the dialogue in the film had to be recorded not once, but twice. Peter Gleaves, an Automated Dialogue Replacement Mixer at De Lane Lea Studios in Soho, London explains: "The original sound sometimes has background noises -- wind machines, sounds of cars and aeroplanes -- that in a production like '10,000 BC' you don't want to hear. So to get rid of them you have to get the actors to redo all their lines, or most of their lines."

Steven Strait was summoned to London to re-record some of his dialogue. When the Revealed cameras dropped in he was working on his grunts. see Steven Strait grunting and panting!

"It's an action sequence," Strait explains, "so there are very few words. It's mostly just running and jumping and grunting and doing all sorts of strange sound effects that are going to look incredibly weird in this room, but hopefully it works in the film." see the final product of Steven's grunting, the mammoth hunt