(CNN) -- She added smart to sexy as a Bond girl opposite Pierce Brosnan's 007, and proved her dramatic and action credentials in "Crouching Tiger Hidden Dragon," but for actress Michelle Yeoh, life and acting are both all about balance. 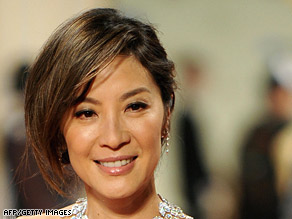 Michelle Yeoh: "There are reasons why you do movies. It's for the love of it."

"I think it's very boring for my audience, just to see me in the regular roles. I love my action films. And I think right now, I have a nice balance," she told CNN's Talk Asia.

Poise and balance are something that Yeoh is naturally blessed with. Her childhood dream of becoming a professional ballerina was dashed when she sustained an injury while training at the Royal Academy of Dance in London.

However, she continued to study completing a degree in dance and a minor in drama, before serving as Miss Malaysia at the age of 21, which was more of an ambassadorial role for the country's tourism industry than bikini modeling.

Making her film debut in an action movie in 1984, she made further appearances in Hong Kong action films doing her own stunts, until she married millionaire Hong Kong businessman Dickson Poon in 1988 and put her career on hold.

On giving up acting for the sake of her married life she said: "At that time, it's very difficult to try and juggle a normal life, be where your husband is, try to start a family life, and filming months on end in another country. So I weighed my options. I am a person that believes, you have to give your all. There's no half measure in doing things. You do it well or at least you've got to give it your best shot."

The couple divorced three years later and Yeoh resumed her film career in 1992 in the Jackie Chan smash-hit "Police Story 3."

While she continued to use her athleticism in her roles and do her own stunts, in the pursuit of playing good characters and that all-important balance, she credits the directors she has chosen to work with.

"I look at the scripts and you can understand where the story is going ... but it's a director with a vision that brings it to life," she said.

"There are reasons why you do movies. It's for the love of it or you're thinking of your paycheck. And you have to find your own balance."

When it came to doing "Crouching Tiger, Hidden Dragon," Ang Lee was the essential ingredient.

"I did it really because I adore Ang Lee. That's a true film maker, where they move you, they bring you to places where you can't imagine but want to be."

But being an all-or-nothing person has taken its toll when it has come to the stunts she has performed.

Yeoh tore her anterior cruciate ligament after the first sequence she performed for "Crouching Tiger, Hidden Dragon," which meant that only the dramatic scenes in the film could be shot until she had recovered.

Yeoh has turned her attention to producing as well as acting and found it a challenging experience.

"As an actor you would be judged on how your performance is and so that's where your focus is. It's a very selfish environment and that sense, because as you know, you can't make excuses afterwards. But as a producer, you have to make sure everyone is well protected and everyone is safe. And if anything goes wrong, it's all on your shoulders," she told CNN.

The films she produced, 2002's "The Touch" and "Sliver Hawk" from 2004 were panned by critics, but she makes no excuses: "That's the nature of the business. You should never take these things personally when it works or doesn't work."

And when it comes to passing on what she's learned to young Asian actors, her advice is typically practical.

"For any Asian face, or any Asian girls that have dreams, aspirations or doing crossover work in Hollywood, you must have the language. These are your tools. And then afterwards, the right face, the right demeanor, and the right chemistry."