(CNN) -- Oscar-winning actress Helen Mirren has revealed that she was date-raped when she was a student. 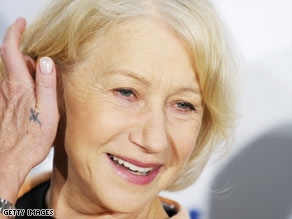 Helen Mirren has previously spoken about a bad experience she had after taking drugs in her early 20s.

In an interview with Britain's GQ magazine, the 63-year-old also admitted to using cocaine at parties until she was forced to quit in the early 1980s.

Mirren, who picked up an Academy Award last year for her starring role in "The Queen," said she was date-raped "a couple of times" when she was young but did not report the attacks because "you couldn't do that in those days."

Despite her experiences, the British-born actress said date-rape was a "tricky area" and something men and women had to work out between themselves.

She said it was rape if a couple engaged in sexual activity but the woman said "no" at the last second.

However, in comments likely to anger anti-rape campaigners, she added, "I don't think she can have that man into court under those circumstances. I guess it is one of the subtle parts of the men/women relationship that has to be negotiated and worked out between them."

Mirren also spoke of her "love" for cocaine during the interview for the October edition of GQ but claimed that she gave up the drug after learning that a leading Nazi war criminal had been profiting from the drug.

"I loved coke. I never did a lot, just a little bit at parties," she told GQ. "But what ended it for me was when they caught Klaus Barbie, the Butcher of Lyon, in the early '80s.

"He was hiding in South America and living off the proceeds of being a cocaine baron. And I read that in the paper, and all the cards fell into place, and I saw how my little sniff of cocaine at a party had an absolute direct route to this horrible man."