LONDON, England (CNN) -- The singer Madonna has settled with Guy Ritchie for $75 million, or about £50 million, as part of their divorce agreement, her representative, Liz Rosenberg, confirmed on Monday to CNN. 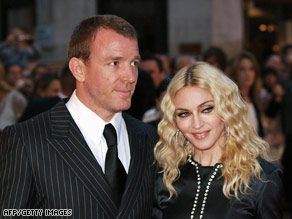 Madonna and Ritchie in London for the premiere of Ritchie's film "Rocknrolla" on September 1.

The couple was granted a preliminary decree of divorce on November 21 Britain's High Court in London.

The couple have six weeks and a day from that hearing before the divorce becomes final.

The two-part divorce is standard in Britain. The window of time allows anyone who objects to the divorce -- or has changed their minds -- to notify the court.

The couple married at Scotland's Skibo Castle eight years ago.

They have three children -- Rocco, born to the couple in 2000; David, adopted from Malawi; and Lourdes, Madonna's daughter from her previous relationship with dancer Carlos Leon.

British newspapers reported Friday that Ritchie agreed to take almost none of the singer's fortune, estimated to be around £300 million ($447 million).