Scorsese shines a light on the Rolling Stones 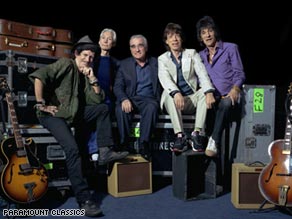 The Stones/Scorsese combo is backed by a team of Oscar-winning cinematographers, more than 18 cameras, duets with the White Stripes' Jack White, pop starlet Christina Aguilera and blues granddaddy Buddy Guy, plus a cameo from a former U.S. president: the Stones juggernaut is well and truly in town.

Scorsese is no stranger to the world of rock music. He cut his teeth as an editor on seminal 1970 documentary "Woodstock" and aside from making some of the silver screen's finest movies ("Goodfellas," "Mean Streets," "Raging Bull," "The Departed"), he is also the master behind definitive rockumentaries "The Last Waltz," which captured The Band's final performance, and Bob Dylan epic, "No Direction Home."

But apart from his musical collaborations, rock has underpinned many of the master's greatest moments -- and his relationship with the Stones goes way back.

The Stones themselves have provided the backing track for classic Scorsese scenes: notably, Jack Nicholson's Irish mobster's entrance in "The Departed" to the thumping sound of "Gimme Shelter" and "Jumpin' Jack Flash" behind De Niro's introduction in "Mean Streets"; while "Goodfellas" features "Monkey Man" and, again, "Gimme Shelter."

Scorsese, who pioneered the use of rock music on "Mean Streets," has said that his use of eclectic soundtracks stems from New York, where all genres of music would blast from the brownstones around his neighborhood. And for him, the Stones provide the sound of the city, the sound of the streets: cool, dangerous, absolutely self-assured, suffused with menace and gangster swagger.

CNN's monthly movie show brings you the inside track on the movie business.

He says, "The Stones were key ... I was creating scenarios in my head as I listened to their music."

"There is a drive and an authority to their music, and also an edge to it," he continues. "I've used Gimme Shelter twice now in my pictures." (It's left to Jagger to joke that Shine a Light is the first Scorsese film not to feature the track.)

So when Jagger decided he wanted a film of their live performance, who better to call. "It's good to start at the top," he says.

Initially, guitarist Keith Richards was reluctant to go ahead with the film. He told CNN, "I wouldn't have done this. They said, 'We wanna shoot a show,' and I said, 'Yeah, so?'" But Richards, a film buff and longtime fan of Scorsese's work, couldn't resist the chance to be shot by the director. "You go, whoah," he said. "You can't f*** around with him. I wanted to see what Marty saw in the Stones."

And Scorsese's response? One word: "Absolutely."

But Jagger's idea for the movie centered around the Stones' biggest ever concert, in Rio de Janeiro. Scorsese wasn't convinced that the Brazilian beach extravaganza would hit the right note . "I wanted to capture the music and their interaction on stage, I wanted people to feel like they were with them in the real film," he explains.

Eventually he persuaded Jagger to forego the Rio beach gig for a double date at New York's Beacon Theatre.

On the night of the performance, we see Scorsese's painstaking preparation come up against the monster of spontaneity that is the Rolling Stones live. As the clock ticks towards curtain time, the filmmaker still doesn't have the final set-list, and is getting jittery. "It felt like the last minute. It may actually have been an hour or so," he recalls.

But as the song goes, you can't always get what you want: Scorsese had to place his faith in his meticulous planning, and the hope that he would be able to respond to the performers -- Jagger especially -- on the night.

Scorsese believes that the band's live performances are the key to their long-lived success. "The way they work off of each other and off of the audience ... It's fascinating to see that kind of power," he explains. "They cast a spell, something primal but very orchestrated."

When it came to the edit, Scorsese ditched any thought of talking-head interviews, choosing instead to splice vintage TV/archive footage between the live shots. That puts the focus firmly on the music, while underlining the Stones' longevity.

So where does "Shine a Light" stand in relation to other rockumentary greats? Sure enough, it's not The Stones: The Spectacle, Mick Jagger's original concept. This is an intimate and illuminating look at the relationships in rock 'n' roll's greatest band. It pays tribute to their longevity, highlights their rich repertoire and shows how, forty years on, their live shows still crackle with energy.

And while fans will decide whether Scorsese has fulfilled his aim to make "something that's as close as possible to a live performance," Keith Richards believes Scorsese got the gold. "He captured what we do," he told CNN. "We are what we are. We're a rock 'n' roll band."